We sit facing one another, a backdrop of her own self on paper, full-sized, exploding with colour, words and something indefinable- honesty perhaps, something dark, a sadness behind the reds, yellows, golds and greens. Where we sit is a glimpse of the Josephine King solo show at Riflemaker gallery on Beak Street. It is her second show, after her hugely acclaimed debut, ‘Life So Far’, an exhibition of self-portraits in ink telling the story of King’s life living with bipolar disorder. ‘I told him I was an Artist. He said, ‘Can you cook?’’, King’s upcoming show tackles, not only King’s struggle with mental illness, but also her identity as a female artist and her relationships with men.

‘I was painting for a long time, years, but always other things, other subjects.’ Josephine says, explaining the conception of her first self-portrait. ‘But then I got very ill with my illness – I was in an extremely dark place and it just happened, just poured out of my brush. Just like that, it just appeared – this woman on the paper, myself, my portrait… And that was it. For the next four years I just painted non-stop, always expressing my illness, this text around the edge, framing it all.’ Sitting back in our chairs, a vehicle grumbles and growls beneath the window and the floor of the gallery vibrates slightly. ‘For this show the same thing just hit me again, it started to flow. This time though, I wanted full-sized portraits; I wanted to send my message through with the colours again and the clothes too, but there’s something else now too – it’s been more to do with looking at the outside world- the outer, rather than the inner.’

Together we look behind King at a large portrait, the artist draped in colour, clutching a sketchook, ‘see, it’s more me because it’s life sized!’ She laughs. ‘But it’s not all about me and my illness; it dawned on me that I had rather a lot to say about what it is to be a female artist, the reactions you get, how you’re seen as being (for the most part) selfish… or well, what I call ‘the selfish bitch.’ …You don’t often hear people say these things of course!’ Again she laughs, ‘but you do see it in their eyes, in where their conversations lead – a woman is seen as selfish if she does what she wants to do and doesn’t conform.’

I ask if the ‘modern woman’ in Josephine’s paintings is herself or perhaps all women and she says with a certain thoughtfulness, ‘it is me, yes, but it also represents what I see: that women still suffer a lot in the 21st century, bad marriages, loneliness, violence – a violence which I myself have been through with men. I am addressing something which maybe lots of women can identify with. I want to show that these things are happening, but no one is talking about it. Women don’t come together now because they think equality is ‘done’ or we are free, but really, we’re not’

‘It makes the message stronger to have text around the edge too: people look a second time – they might read, then look, and then see it, my message. I can say what I want to say because I’ve got nothing to loose, nothing to hide.’ A huge, mischievous grin spreads across King’s face, ‘I’m not stopping! I’m going on! I’m going for it!’ she says.

The passion and the genuineness of King’s conversation astound me as we delve deeper into conversation, moving onto talking about her illness. Her smile, contagious, seems to rub of onto me as I grin and laugh with her as she turns even the darkest of subjects into stories full of colour and humour: ‘When I’m manic you cant stop me! I painted this for example!’ she says pointing at her outfit, ‘and these shoes too! I just get the bucket of paint and paint whatever.’ The sun floods the room with gold and an elongated shadow of Josephine’s regal hair stretches up the walls.

‘My sketchbooks are probably the most important thing to me…. Here in my picture, look!’ She points behind her at a painting on the wall. ‘I fill these sketchbooks with colours, animals, everything and anything of where ever I travel to and it all becomes painting in the studio. But I don’t have to go abroad to paint! I can travel in the British Museum because the whole world’s art is there! Clothes are really important too – I don’t like fashion, but I love clothes. I think they express something of me. The first impression people get is usually from the clothes, the bright colours. The paintings look happy from a distance but close up there’s this darkness. It’s a paradox really between what’s beautiful and what’s painful.’ I look up into the eye’s of Josephine’s portraits and see what she speaks of: a bleak, unfaltering stare peering through seas of shimmering colours.

‘The influences and the sources of the paintings come from a lot of places. It’s all experiences, life… My life is painting – it’s what I do and what I think. I feel wrong now because I’m not painting, very wrong. It makes me happy and it’s helped me enormously. It keeps me alive!’ She smiles once more as our conversation comes to an end and, lost in her paintings, her words and her great personality, I leave in a dream.

To find out more go to www.Riflemaker.org

How accessible are the arts for the disabled? – words Al Woods The Arts ... 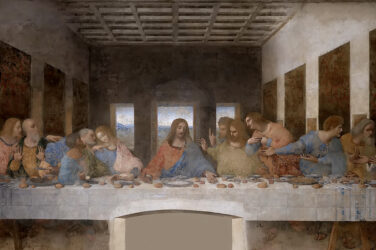