Indian contemporary art is renowned throughout the world for its complexity and depth, reflecting the incredible diversity of India itself.

Within the flourishing art scene of the past century, artists have introduced themselves as modern and secular practitioners of that diverse culture. Some incorporated indigenous traditions, while others turned to art practices from outside of India.

Even in its diversity, the Indian cultural sphere has been highly politicised. The Bombay Progressives of the 1930s and 40s, for example, had leftist leanings, rejected nationalist art and embraced international practices. Others invented traditions by juxtaposing contemporary art with popular culture, and folk art with urban trends.

Here, we look at five contemporary Indian artists who are retracing the boundaries of Indian culture, and engaging with the forces of globalisation that are reshaping their country today.

Indian multimedia artist Owais Husain uses a combination of video, photography, painting and installation to explore themes of migration, memory and displacement in his art. He explores identity and urban mythology in its evolution from one generation to the next, illustrating his relationship with and abstraction of a more traditional Indian art aesthetic.

Originally from Mumbai, the now Dubai-based artist describes modern society as “driftwood in a ceaselessly dysfunctional world, where a flux of identity in the nuclear and larger domains are elements of human nature.”

You Are Forever, first exhibited at Chhatrapati Shivaji Terminus railway station in Mumbai, features an assembly of trunks, stacked to create a wall and converging in a corner to form a screen for video projection. The trunks are synonymous with a particular meaning; a storehouse of memories but also symbols of movement. The video narrative explored the boundaries of forgotten homelands and depicted the wasteland of memories that fall in between.

An Indian-American author who often focuses on the Desi diaspora in her work, Jhumpa Lahiri has won numerous awards throughout her career, including the 2000 Pulitzer Prize for Fiction.

Her works are plangent portrayals of the experience of immigration, and attempt to bridge the cultural and social gap between her adopted America and the India of her parents and ancestors. In her works, the nature and concept of home comes into question, whilst seemingly fixed categories of nationality and culture are persistently subverted and revealed to be fluid, opaque abstractions.

In her debut short story collection Interpreter of Maladies, she depicts the slow process of cultural assimilation for second generation immigrants, and the growing popularity of her works reveals how much these issues are shaping modern societies, both in the West and in Asia.

Artist and social activist, Amar Kanwar is renowned for his compelling and meditative filmic essays. His films examine the legacy of de-colonisation, exploring the separation of families, sectarian violence and border conflicts.

Kanwar creates his lyrical filmic essays through photography, ritual objects, literature, poetry and songs. His work creates a space that, rather than dwelling on traumatic or political situations, attempts to move beyond trauma and its representation.

The Torn First Pages (2008), which is included in the Guggenheim collection, is a nineteen-channel video installation arranged in three parts. The videos portray examples of oppression by the Burmese military junta and the opposition they faced. The work pays tribute to a local bookshop proprietor who, by excising pages that bore requisite state slogans, became a symbol of resistance. 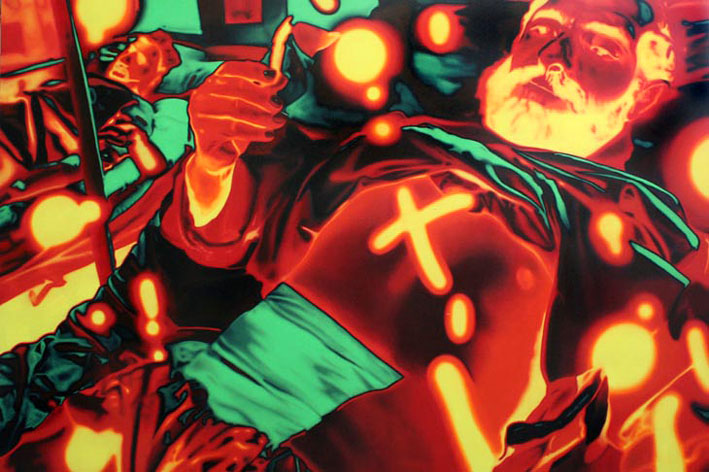 Image courtesy of the Saatchi Gallery

TV Santhosh is a prominent hyperrealist artist who explores themes of war and terrorism in his oil paintings. The South Indian artist recreates the effect of a colour photographic negative where fields of color breathe and throb, and charges his large canvases with figures in contoured and compromising positions.

Like many of his politically motivated contemporaries, Santhosh derives inspiration for his images from newspapers and magazines. In representing them through negative and somewhat abstract colours otherwise hidden implications can be surmised.

In A Story of a City Square (2011), Santhosh lifts a pivotal episode from recent history and renegotiates its appearance with a shock-bulb of violent energy. It’s a painting of impending doom, a world at the brink of an atomic end, and is intentionally more apocalyptic than cathartic. 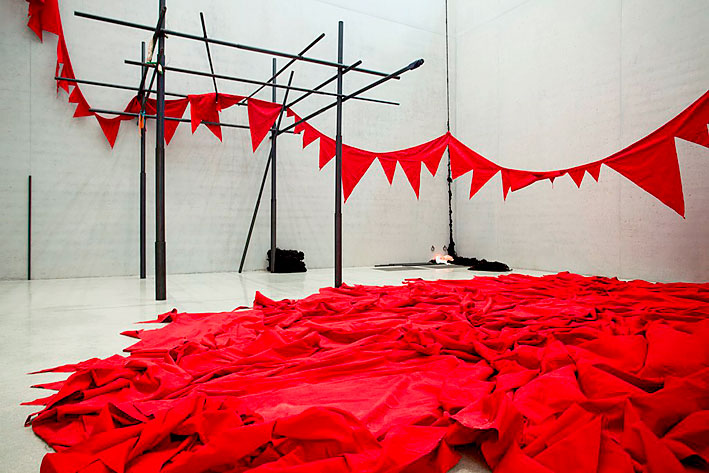 In response to cultural upheavals and India’s uneven economic development, Sheela Gowda began making sculptures that engaged directly with the India around her.

Incorporating sculpture, installation art and photography, Gowda creates works using recycled objects, domestic materials and more unusual mediums like cow dung and red kumkum. Gowda’s practice heavily relies on its process, which blurs the boundaries between art and craft, and questions the role of female subjectivity in the context of religion, nationalism and violence.

And Tell Him of My Pain (2001) employed over 100 meters of coiled thread dyed with red kumkum, suspended and draped across the space to form a three-dimensional drawing. The work referenced India’s spice culture and the textile industry to highlight women’s lived experience and make the suggestion of bodily violence in a patriarchal society.