The urbanised western world filled with cityscapes and driven by the engine of capitalism is far removed from the sparse life in the shadow of the Altai Mountains, Kazakhstan. It is a place British filmmaker Otto Bell describes as, “the most remote part of the least populated country in the world.”

And it is here that Bell took his camera to document a story that creates a contradiction at its heart, to reveal a story with universal themes that signals remoteness as a geographical rather than a human disconnect.

The Eagle Huntress film follows the story of Aisholpan, a thirteen year old Kazakh girl on a quest to achieve Eagle Hunter status. Along with her father, the two challenge the tradition of the art of eagle hunting as a rite of passage passed on from father to son. Inevitably her attempt to become the first female eagle hunter in her family in twelve generations is the subject of disapproval from the wider hunter community.

The sequences of the swooping eagle upon its prey, the soaring drone photography over the desolate landscape of the Altai mountains and flat terrain in its shadow offset the stillness of Bell’s inspiration. It was the photography of Israeli photographer Asher Svidensky’s that first introduced the filmmaker to Aisholpan, his still images sparking Bell’s impulse to tell this young girl’s story. To assert that Bell restored movement to Aisholpan’s world would be an oversimplification, as even in a world set in stillness, one can observe on a sub-conscious level, a movement that bleeds into and disrupts this stillness. On this sub-conscious level it is natural for us to imbue photography and painting with movement, and Bell takes the stillness of Asher’s initial encounter and creates a story of movement. No longer is the motion of Aisholpan’s world left to unfold in our sub-conscious as Bell forges his own study of the connection between stillness and movement.

Beyond our urbanised western world Bell’s camera acts as a window onto another world. This is solidified by the film’s aesthetic presence, where the opening sweeping photography across the landscape symbolises visually a journey towards or an immersion into this foreign culture. The filmmaker forges a connection between the aesthetic and the context of the film, a journey not just for Aisholpan, but one for the filmmakers as well as the audience. Unlike the grace of the cinematography, the music forcefully tells us in moments how we should feel or expresses with force the emotion of the scene. While the cinematography brings the landscape to life, revealing its character and the antagonistic role it plays in Aisholpan’s story, to find the graceful creativity of the score is like scouring for the diamond in the rough – the music generically aspirational, aside from the more memorable subtler musical interludes. 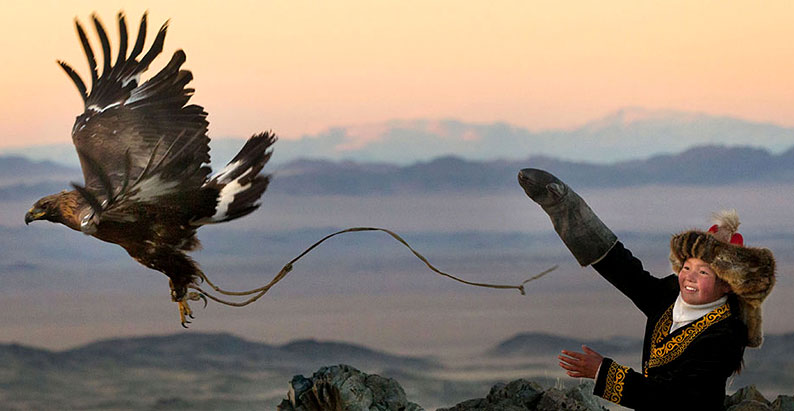 While Bell may acknowledge the remoteness of Aisholpan’s homeland, as a character, her story is one of universal themes that offsets remoteness with a connection and sense of belonging to the wider world. Aisholpan’s quest is an aspirational one, a child daring to dream in opposition to the traditions of her world, where women are expected to conform to a domestic existence, while the men hunt. She radiates a youthful innocence, even a naivety or ferocity of determination, a strength of will that symbolises the role of youth as a fertile and opportune time for change. While children and adolescents are flexible as they are shaped by their world in contrast to adults that are already assimilated into society, Aisholpan symbolises how the young are the ideal candidates to challenge the incumbency of tradition. Yet her story is not one that is defined by simplicity. Her father and mother allow her to pursue her eagle huntress dream, they themselves seen to channel their own liberal inclinations through their daughter. What we witness is Bell exposing a story that looks at a collaborative relationship between young and old, to move forward from tradition and to create a future with choice, rather than one dictated by traditional doctrine.

Such themes define Aisholpan’s journey as a universal one, the aspirational echoing the universal archetypal hero quest to prove oneself. And for the pursuit of a dream, one need look no further than the U.S, where President Elect Donald Trump used the floundering American Dream as a springboard for victory, promising to reignite that dream for all Americans. Yet it is the division of gender that reveals the film’s maturity. Bell captures an image of the truth that recalls that often used expression, “There are two sides to every story and the truth usually lies somewhere in the middle.” Between the two extremes of the aspiration of the young Kazakh girl and the opposition centred around the preservation of tradition, the film occupies itself in between these two. It offers a meditation on the fact that any ability to be an Eagle Hunter is not defined by ones gender, tapping directly into gender as a common means by which human civilisation has sought to structure itself. Rather it is attributable to something that resides deeper in Aisholpan and the other Eagle Hunters – a spirit that is metaphysical in nature and not something that cannot be so easily defined. Here the film does not take sides, but looks at the futility and flaws inherent in extremes.

The Eagle Huntress is a concise and assured piece of filmmaking, Bell bringing Aisholpan’s journey to the screen with an economy. It is one in which we are privileged to share a chapter in her life’s journey that reveals a way of life alien to so many of us that it serves to further humanise our world. And in an age of political and cultural xenophobia, her story is a reminder of how we are connected regardless of geography and culture. The triumph of Aisholpan and the film may be to remind us of the power of the individual and our imperative need for art to humanise a world growing more brittle and individualistic. 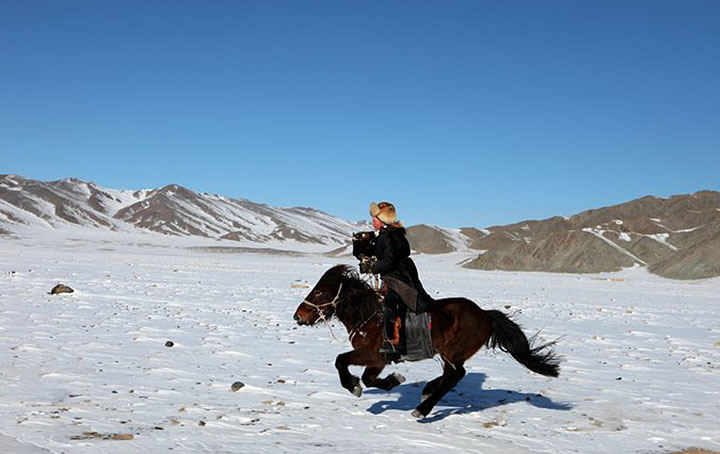