I’m going to talk about George A. Romero’s so-called ‘lost classic’, Knightriders, which has recently found its reincarnated form in a new special edition Blu-Ray edition. But before I do that, I need to get something out of the way: the living dead.

In a hypothetical game of cinematic word-association, if I were to say “George A. Romero”, what would your response be? It could only really be one word and one word alone: “zombies.”

The director’s 1968 breakthrough title, Night of the Living Dead, was the genesis not only of our modern-day conception of the zombie itself but ultimately, by way of its numerous sequels and countless imitations, the diverse and thriving zombie subculture we enjoy today. 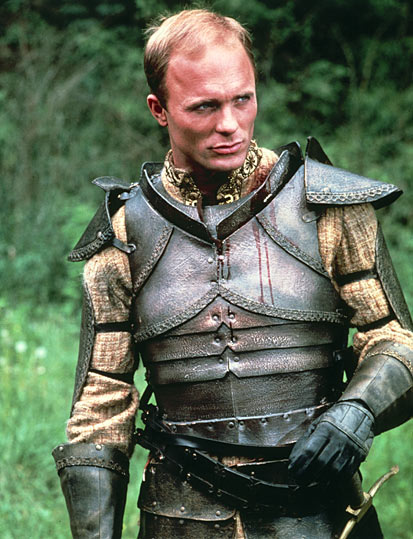 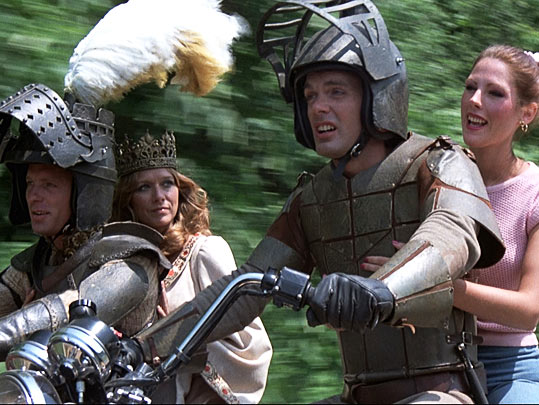 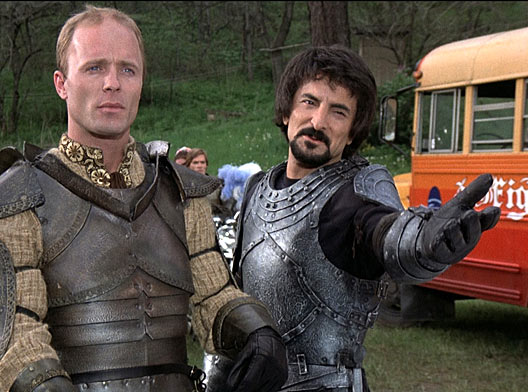 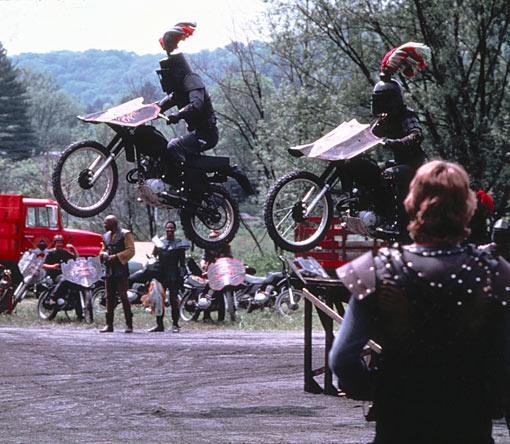 Without Romero, such modern wonders as ‘the Zombie Walk’, a now international phenomenon where upwards of 30,000 people have been known to gather in simulated marches of the undead in cities throughout the world, would not be possible. Neither would the Zombie Car Wash in Toronto, where members of the public can opt to have their car hand-washed by a group of the ravenous flesh-eaters, who buff and polish the car to a shine whilst groaning and clawing intermittently at the occupants within. And let’s not forget the national holiday of Halloween, for who could imagine it’s ensemble cast of vampires, witches, serial killers, mummies and pirates without it’s greatest supporting artist, the humble zombie?

Yet, in spite of the pan-global obsession with all things zombie, and the serious thought that many people, myself included, have put into our detailed survival strategies should the undead horde actually rise, there’s only one person to whom consumption by zombies has ever really been a serious threat, and that is Romero himself.

Night of the Living Dead was a runaway success, ultimately generating a box office return of more than 3000% of its miniscule budget. The film, along with its sequels, also eclipsed his subsequent titles, both in terms of box office return and cultural influence. Which is understandable, seeing as the concept of the ‘zombie apocalypse’ has been acknowledged and praised universally by critics as a powerful metaphor for consumerist society and its perils, thus accounting for its instant and widespread appeal to us (the real undead horde!). However, it has been reported that as a consequence, Romero’s name has become so synonymous with the franchise that finding funding for a film outside of the horror genre is next to impossible for the director, a fact which may account for the now long list of tired and derivative […] of the Living Dead sequels he has directed. However, like the titular villains (or heroes?) of Romero’s signature zombie series, the director’s reputation itself could well rise from the dead, thanks to the re-release of the largely forgotten Knightriders.

Made in 1981, directly after (and consequentially overshadowed by) his 1978 mega-hit Dawn of the Dead, Knightriders tells the story of a commune of counter-culture misfits who live by a hybrid philosophical code mixing English Medieval chivalry with 1960’s American counter-culture. Travelling across the US as a kind of underground circus troupe, they stage live jousting tournaments to earn a living, the twist being that, while dressed head-to-toe in full suits of armour and brandishing jousting lances, the combatants do not ride horses but modern-day motorcycles instead. At the heart of the story is a bitter rivalry between Billy (Ed Harris), the leader of the commune and its self-appointed ‘king’, and Morgan (Tom Savini), who plays the part of ‘the black knight’ – rival to the king. Outside of these supposedly staged contests, the antagonism between the two becomes a conflict of ideals; as Billy struggles to maintain not only cohesion within the troupe, but also its adherence to the Arthurian code around which life in the troupe is centred, Morgan pushes them to abandon this code altogether and capitalize on the financial potential to be found in bigger shows and professional management.

Thematically, the film covers familiar ground, exploring the battle for individuality versus conformity and consumerism, just as Night of the Living Dead and its sequels do. But Knightriders feels like a more personal expression of this idea, less abstract, and features the looming threat of consumerism made flesh in the sleazy talent manager Bontempi and the mutinous ambitions of Morgan (excellently portrayed by Savini). Furthermore, the shifting dynamics between the different members and factions of the troupe excellently evoke the complex internal politics of a group whose days look numbered. Made at a time when the whirlwind consumerism of the 1980’s was taking hold of American society, and Romero’s filmmaking career itself was set on a trajectory which would see his own creative sovereignty increasingly marginalized, Knightriders feels like an ode to the individual.

The film is a tad more demanding than anything I’ve seen from Romero, being a slow-burning 2 hours and 25 minutes long (something which may account for its lack of commercial success), but ultimately it takes us to some strange and unexpected places along the way and stays in my mind as unlike any film I’ve seen before. For this reason, should I ever find myself needing to word-associate from the name ‘George A. Romero’, I might just find myself saying “Knightriders” instead of “zombies.”

As is becoming a bar-raising norm for re-releases and restorations from Arrow Video, the excellent special features include candid and revealing interviews with Ed Harris, Tom Savini and Patricia Tallman as well as a Director’s commentary by Romero, a collector’s booklet and a double-sided sleeve featuring both re-imagined and original poster artwork.

Interview with Ryan Bonder on his film ‘The Brother’

Interview with Ryan Bonder on his film The Brother – words Paul Risker Filmmaker ...