Warning: "continue" targeting switch is equivalent to "break". Did you mean to use "continue 2"? in /var/www/vhosts/fluxmagazine.com/httpdocs/wp-content/plugins/revslider/includes/output.class.php on line 3689
 Artist Feature: London’s young and upcoming – Red Pig Flower – Flux Magazine
type in your search and press enter

She pauses – we’re talking on the phone about an upcoming exhibition, Winter Pride at Tabacco Dock, London, that she is currently preparing for, but have diverged onto the subject of her unusual name – “I can’t quite explain it. I’ve been obsessed with red since I was about fifteen and it’s just become more and more significant in my life.

I wear it a lot; it’s such a bright colour and symbolises so much… blood, the sun, roses, excitement.” “…And pig?” I ask. She laughs – “Well, I like pigs!” she exclaims, and then, more seriously, “I think pigs are interesting, They’re sort of victims… misunderstood… people think they’re stupid, but they’re actually very clever, even more so than dogs! And people say they’re dirty, too, but they’re actually very clean. I like that they’re greedy, as well. I want to be honest about my own greediness; I think everyone is greedy and selfish… and it’s ok to be greedy. Like a pig.” 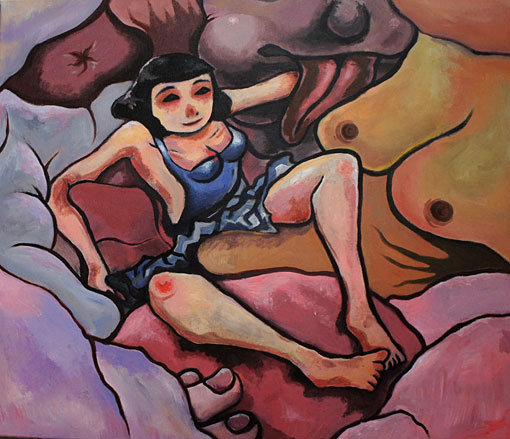 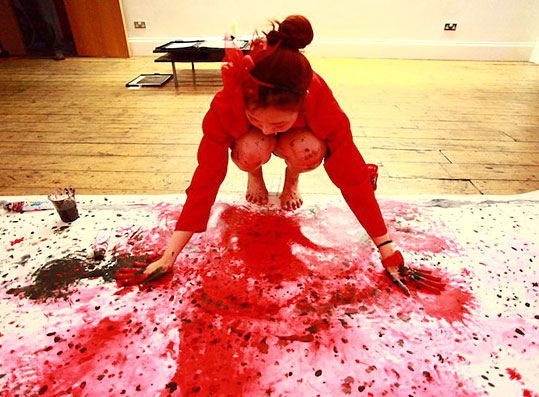 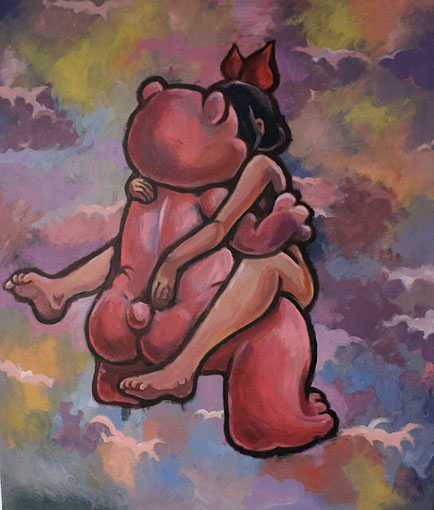 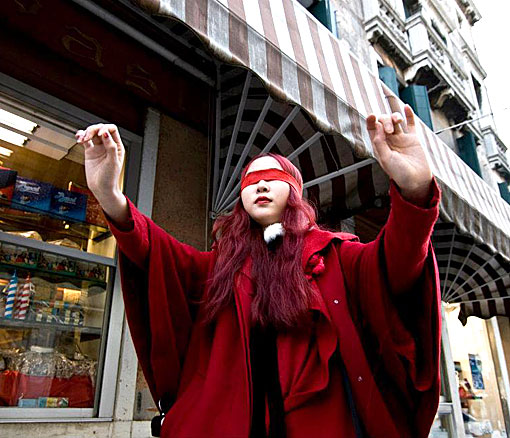 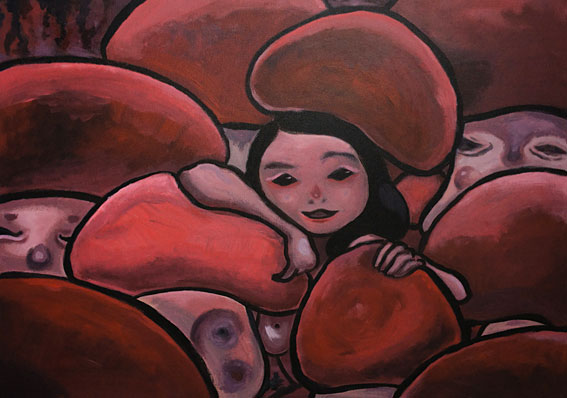 “I am selfish in my art sometimes,” Red says. Her strange, dreamlike and fantastical paintings conjure a dark fairytale world (or “wonderland,” as she calls it) that, she explains, stems from tales full of magic, humour and beauty created in her mind as escapism. “They’re an escapism from everyday life, I guess. When I take bits from my wonderland and create art with them, I’m making the real world more magical for myself and more beautiful. If the world becomes more beautiful and more colourful, it becomes a place I want to be in more and more. So, it is selfish, partly.” I ask her about the creatures depicted in her series of paintings, titled Dirty Filthy Wonderland, and she says (correcting me after I call them ‘monsters’), “They’re ugly, yes, but they’re friendly, too! I like to be funny, sometimes. They are sort of reflections of darker things in reality, turned into funny, playful things in my wonderland. Fairytales are an obsession of mine; anything you want can be transformed through them.”

“Flowers,” – we’ve moved onto the third part of her name – “take me back to my earliest childhood memory. I must have been two or three at the time because I only came up to my father’s knees; I was in my grandmother’s garden, surrounded by them (flowers) – it was spring – and my parents were there, and I knew that they couldn’t stay; I knew that they were leaving soon. I didn’t grow up with my parents. My sister and I grew up at my grandmother’s house because our parents were too busy. I remember the feeling of being in that garden with my parents that day; I knew that the moment wouldn’t last and that it’d soon be over, just like those flowers. Do you see? My parents would leave and the flowers would die. So, in my dreams – my wonderland – flowers last forever, like plastic flowers. In wonderland, moments can last forever.” Red’s “flower” concept appears in several of her works, particularly in a series titled Receipt Project. “The Receipt Project was my way of trying to take something from moments that I enjoyed with friends. I move around so much, from country-to-country, that these moments are really important to me. So, for this project I had each friend make a receipt for the time we spent together – there’s a value to time and friendship, I think – so that I could keep those moments forever.”

Despite the often dark, melancholic and sometimes sexual (the latter in Dirty Filthy Wonderland) themes in Red’s work, a charmingly childish and innocent side emerges in her longing for magic and fantasy. Moments of happiness – plucked from reality – are stretched out and prolonged, and darker moments are made fun of, turned into strange and sometimes amusing characters. Her life-experiences are repeatedly transformed into scenes from her “wonderland” and reality is almost entirely viewed through a fairytale looking glass.

“For this exhibition, I am going to be selling magic potions,” Red explains as we move on to discuss Winter Pride. “Magic potions?” I ask. She laughs. “It will be a bit like a performance. I’ll be dressed as a witch – I’ll be becoming a character from my wonderland – and will be selling the audience bottles filled with coloured liquid. Each will be a potion that makes a dream come true… dreams like going to the future, finding love, going to the past… The idea is that art can make dreams like this reality. When people buy art, they fulfil a desire – the art makes some kind of wish come true; art can be magical, they just have to let it be. Then, it can transport them in time or help them understand something like love.” She pauses. “So, that’s what it is about. I want to sell art as magic. And, to some people, maybe they will believe and they will see the potions as potions…” “And the others?” I ask. “Other people? They will just see coloured liquid in a bottle. But, I don’t mind that.” Red’s other piece for the show will be a flying boat, made from two hundred empty bottles. “The boat represents one of the dreams coming true. The potions have been consumed, so the boat is flying. And I want it to be beautiful. Even though each individual bottle is just recycled plastic and underwhelming alone, the bottles together will appear like glass, shiny and, I hope, beautiful.”

For more information on Red Pig Flower, visit her website here or befriend her on facebook. For more on Winter Pride, see here. Red Pig Flower’s performance will take place on Saturday for one day only at Tabacco Dock and will then move to East India Dock.

All autobiography, like memory, is fiction. In recounting and remembering, we edit and extrapolate ...

You can almost feel the sulphuric heat Disney’s Maleficent is going generate when it ...

Unknown Heroine is the first solo exhibition in the UK of Croatian artist, Sanja ...