Ahead of the theatrical release of Tavarataivas (My Stuff) FLUX Magazine caught up with Finnish documentary filmmaker Petri Luukkainen to discuss the one year long radical experiment he undertook to explore his relationship to his stuff.

Starting out naked in his apartment the rules permitted Luukkainen to retrieve only one item per day from storage.

When we sat down to discuss his compelling debut feature he offered us his thoughts on setting himself a question to answer, inviting the audience into his world to create an interactive experience, the definition of documentary and fiction filmmaking and considered whether escaping reality is impossible.

Writers are always told to write what you know, but with My Stuff you set about answering a question.

“In the film there are some scenes from my actual video diary from many years before the actual experiment. These had nothing to do with the project. Years later when I was filming I was thinking of the same things. I was going around my apartment filming my stuff but I’m now starting to film it, taking my stuff into storage and actually doing something. So I was just not self-reflecting all of the time, and this was not a planned film production. So the key thing was just to go into the process.

This was not the happiest time in my life, and in some sense being ready for a change I just took my stuff and started packing. This was the best thing I did for myself because when I had the idea to start packing I was taken to some other place, and that’s when I started to think maybe I should film this, maybe I could do a documentary. If I was to do it how long would I do it for? So then I started to figure out these rules, and it was when I realised the process within itself that I knew that’s where I’m going to learn. But it was actually through wanting to prolong the process that I came up with the guidelines.

If I had done it by sitting down and reflecting with people who were wiser than me and writing and making up the rules as to what I was going to do, then I’m not sure I would have actually done anything with it. If I had not, it would have meant missing out on something that has become a special part or time in my life. In the past five years the vision to start packing and to just go into the process was the best thing that has happened to me, because I believe in the experience based process.”

Actually having these items in our lives is what makes us human because we need warmth, shelter and food, but otherwise everything else is about how we express ourselves; how we communicate our inner thoughts with other people. So I find it intriguing for people to see the actual film.

This was not a film production. It was just me and my friends, and so the whole film was personal for me. In the film I’m single and so maybe the camera was in a way my partner [laughs]. Maybe it was my girlfriend of sorts, and maybe that is a psychological reason behind filming [laughs].”

You’ve spoken briefly about documentary versus fiction, and they were once viewed as being worlds apart, but gradually they have evolved. Both are aiming to tell stories however in a very different way, and perhaps they are not as separate as they used to be.

“It’s an ongoing debate that the audience are perhaps not as interested in. I think documentaries can tell us a story, and you can have a creative treatment of some subjects. Documentary and fiction films are more like art pieces, and where art happens is between the piece itself and the audience – that’s where the magic happens. In a way I don’t separate documentary from fiction or from music; they are kind of all of the same. But there are these documentaries that are more fictional nowadays, and so I think it is a question for the artist/director. That’s the only place it actually matters. What is the artist going for? If it’s more like a traditional documentary can you bend the rules of this kind of truth?

For me it is clear how you can have these boundaries of documentary, fiction film and mockumentary because it’s easier for us to orientate ourselves. But if you were to look at films that you knew nothing about, then you would just start to look and you would be sucked into what it is showing you. You might think during the film well is this documentary or is it fiction? You would have this debate but you would have it with the piece of art itself. It’s just for orientation.”

One of the ideas you touch upon is that of escaping reality. As human beings we are built to find a way to belong, to be accepted within our society. Do you think it is possible to escape reality when it is so interconnected with belonging?

“Let’s say what I did metaphorically was to take this soul searching trip experience to define myself. Normally people go on these finding yourself trips where you go somewhere else; you change and you come back to your lives. When you get back there would be your apartment and you would see your everyday life. But you have changed within you and so there might be a small conflict. So I was thinking if I can take my finding myself trip within my own space, and after the one year trip I would still wake up in my own apartment and my everyday life around me will have changed as well. So maybe I was able to escape the reality a little bit.

It was quite radical in the beginning. It was kind of like a clean slate when I was staying naked in my apartment. That might be one of the best examples of escaping the realities that I know of. If I was to say which is better – doing this two week cycle or doing this one year small experiment, then I would say in that in the one year I started to change the life around me more.” 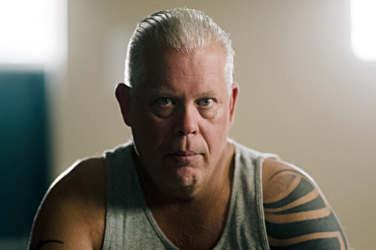 words Danny Lamb I didn’t know what to expect when I sat down to ...

History is no stranger to cinema, the latter seeming to view the past as ...