Transaction presents the work of Mishka Henner and Mike Chavez-Dawson, two Manchester-based artists who interrogate systems of power, belief, and commerce. Their works are often wry critiques and explorations of the languages and myths at the heart of art histories, popular culture, and industrial infrastructures.

For Transaction, Henner has produced a number of new original and editioned works from his Sightseeing, Richtered, and Golden Ratio (Cash Paintings) series, including a world premiere of his $17,711 painting, the latest in a long line of paintings sold at the values depicted.

Chavez-Dawson is excited to be presenting all new-works for Transaction including a bespoke commission for art collector Frank Cohen that sees his new ‘Kleckztale Chairs 2, OMTWF FC*, 2022’ with a fabric design produced from four unique text-Rorschach paintings (this will be on display to), new Phantom Works that sees him create a new set of upholstered fabric editions – though here he’s collaborated with the psychic / medium Dr Wilde Leigh to invite the dead artists Leigh Bowery, Otto Dix and Leonora Carrington to haunt the designs with new works from beyond the grave, Anomaly Fountain ‘Yves it alone…’ edition – which sees him return to his ‘Duchamp Ring’ sculpt with a slightly modified design and Yves Klein Blue finish – mounted on a sterling silver ring (sized to collectors wedding ring finger),  a limited-edition bookwork and limited-edition essential oil titled: ‘Transaction Blend’.

Mishka’s works have appeared in group shows at the Museum of Modern Art, NY, the Pinakothek Moderne, Munich, Turner Contemporary in Margate, and are collected by the Metropolitan Museum of Art in New York, the National Gallery of Art, Washington D.C., the Centre Pompidou, Paris, University of Salford Art Collection, and the Arts Council Collection in the UK. He received the ICP Infinity Award for Art in 2013 and shortlisted for the Deutsche Borse Prize and Prix Pictet.

Mike has exhibited and performed nationally and internationally at Tate Britain, Barbican, ICA, British Art Show 7 at Nottingham Contemporary, ZsONAMACO MEXICO ARTE CONTEMPORANEO 2017, Design Miami, The Whitworth Art Gallery, Home, Castlefield Gallery, Grundy Art Gallery, and the. His works are in public collections held by Manchester Art Gallery, Bury Art Museum, the Pod Collective (Coventry). He won the Whitstable Biennale Open in 2008 and was longlisted for Artangel’s 2013 Open and made the top 100.

The Importance Of Mobile App Design In The Modern Era 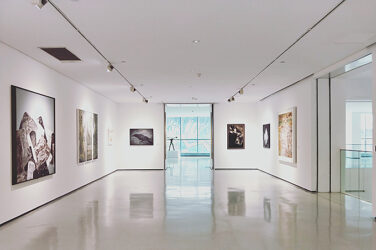 Why Is Marc Chagall The Most Influential Jewish Artist?

words Alexa Wang When contemplating Jewish art over the last few centuries, there are ...

Romanian Art from Marius Bercea, Stefan Constantinescu and Adrian Ghenie Over the last 20 ...