I cling to bare branches of trees as I clamber around the edge of the pond at the back of Victoria Miro Gallery. Following closely is artist Alex Hartley who instructs my footfall as we approach our colourful, yet tattered destination – a Geodesic dome floating on a raft which Alex and his chickens have been calling home for the last month. 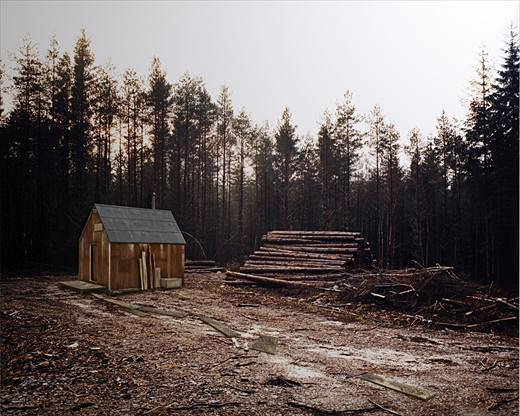 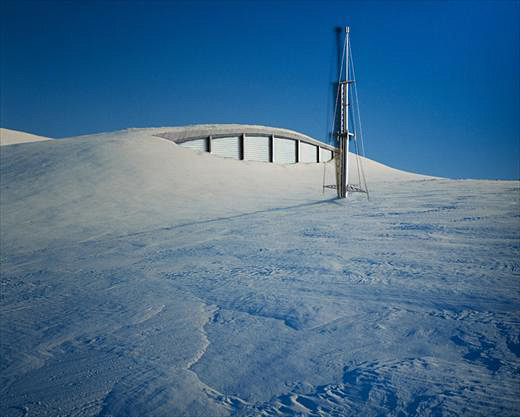 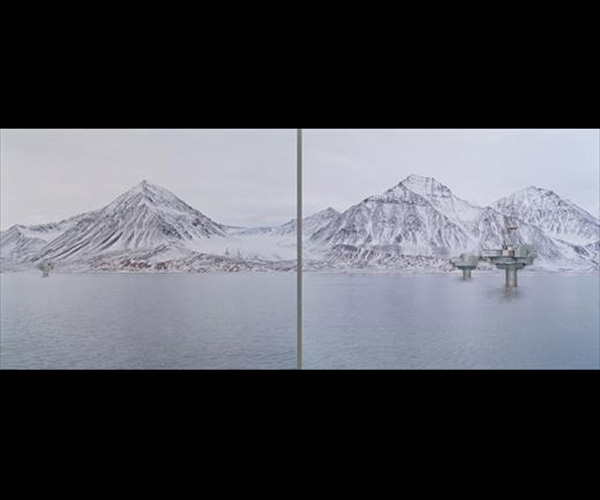 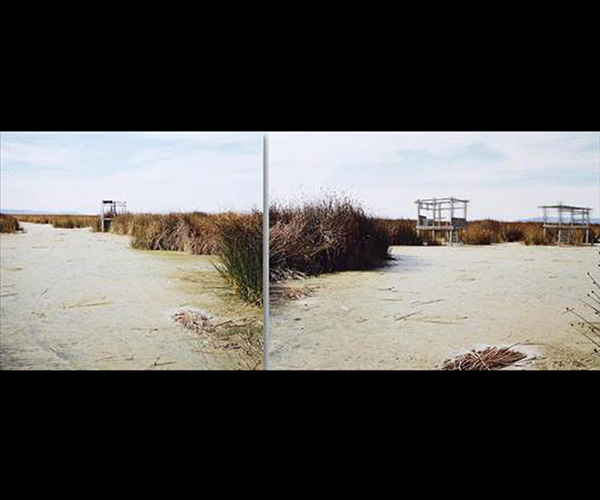 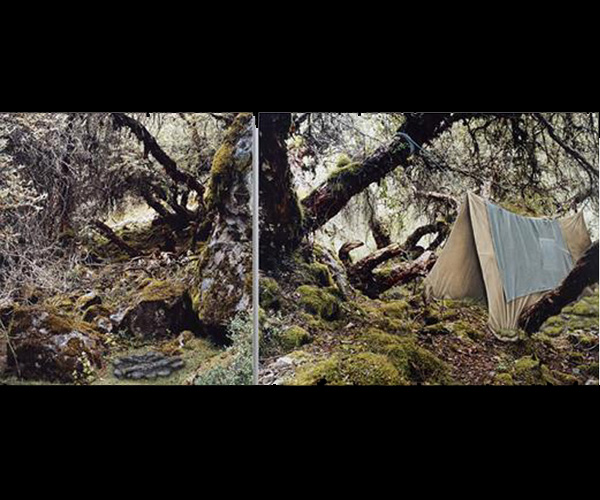 The dome, replica of a Buckminster Fuller creation famously appropriated in 60’s artist-commune Drop City, is part of a London Art Show at Victoria Miro of Alex’s most recent culmination of work, The world is still big. Part of the show is a series of large-scale photographs of landscapes with intricate structures built into them: a worn tent in forestry, a Unabomber hut in a solitary clearing. It is often hard to distinguish between intervention and photograph. ‘My idea is that the guy who lives in these photos, which is basically me, has taken over a community that’s failed somehow. The hippies have moved out, my man has moved in…’ Alex says as he lights the stove and pulls up two chairs, ‘The photo represents this one moment and what I end up building into them is a back-story to that moment usually about failure: a man trying to inhabit wildernesses, a man trying to inhabit these utopian dreams gone wrong.’ Alex throws a log into the fire and the crackling drowns out the sounds of the city which, shut out behind the dome’s door, seem bizarrely far away.

We talk about the dome and Alex tells me how it is a continuation of his other work: an alien structure built in an empty space, inhabited by the same character who inhabits the photographs. ‘The idea of the wood burner and the chickens is that it kind of animates it when I’m not here,’ he says gesturing towards the coop. ‘I chose the dome structure because it’s very representative of counterculture; the hippies embraced them because to live in real houses was for squares! And I think… I think I’m a bit of a hippy really!’ He laughs ‘I do really enjoy building on a real scale too – recently I made our pigs a modernist pig house!’ I ask him why in his photograph-based pieces, he builds the structures on the images rather than building them in real life and he exclaims with a grin ‘I think, in a way, that is my fantasy! But I guess I’m scared of the failure that’s embraced in the photos.’

‘So, in this context, are you a performer?’ I ask, to which Alex replies laughing ‘Definitely not a performer! I’m meant to be just the stumbling noise inside – this dome is more like a tableau rather then being interactive and I’m just someone who activates the tableau.’ He pauses, ‘I’m one of the chickens!’ and grins.

We move on to discuss the project Alex is embarking upon as one of twelve artists selected for the Olympic program Artists Taking The Lead, of which there are suggestions of in the project space of the gallery. In 2004 Alex embarked upon an expedition to the High Arctic and discovered an island, newly revealed by melted ice caps. In 2011, with the permission of the Norwegian government, Alex, with a team of people, moved part of this island into international waters, declaring it a nation and naming it Nowhereisland. ‘It exists in three forms,’ Alex says, ‘as the physical island/sculpture, online (where people can become citizens) and as a travelling embassy. In 2012, it’ll travel around the West coast of England.’ I tell him I’m a citizen and he cheers and laughs! ‘Great!’ he says.

‘What we’re searching for at the moment is the idea that as a citizen, you have a real deciding voice in what happens in the project as it goes on. NowhereIsland resides in the population. When all the nations come down for the Olympics, we can have this borderless nation which stands there and actually represents something… that’s my dream!’

‘It’s ended up working quite well with my other work too. It seems that there’s this otherness, an alien something that I’m always trying to pin down.’

I ask what’s going to happen to Nowhereisland after the project finishes and again, he grins, ‘what I most want to happen is that it gets distributed to all the citizens. All the bits of rock will get broken up and sent out, distributed all around the world.’ ‘And the dome we’re sitting in?’ I query, ‘I’ve been talking to Occupy to see if they’ll take the dome after, because it’s so well insulated. As an object, I think it’ll serve a function for them.’

As I leave the dome, I imagine where it might sit next and who might occupy it – what their story might be. Alex, his dome, his wild worlds, solitary characters and chickens, as I step into the crowded mass of London rush hour, are left behind me, suspended in a strange reality or dream where the city seems to disappear.

To find out more about Nowhereisland and to become a citizen, visit http://nowhereisland.org/. ‘The world is still big’ the London Art Show from Alex Hartley is showing at the Victoria Miro Gallery 5th January – 21st January. 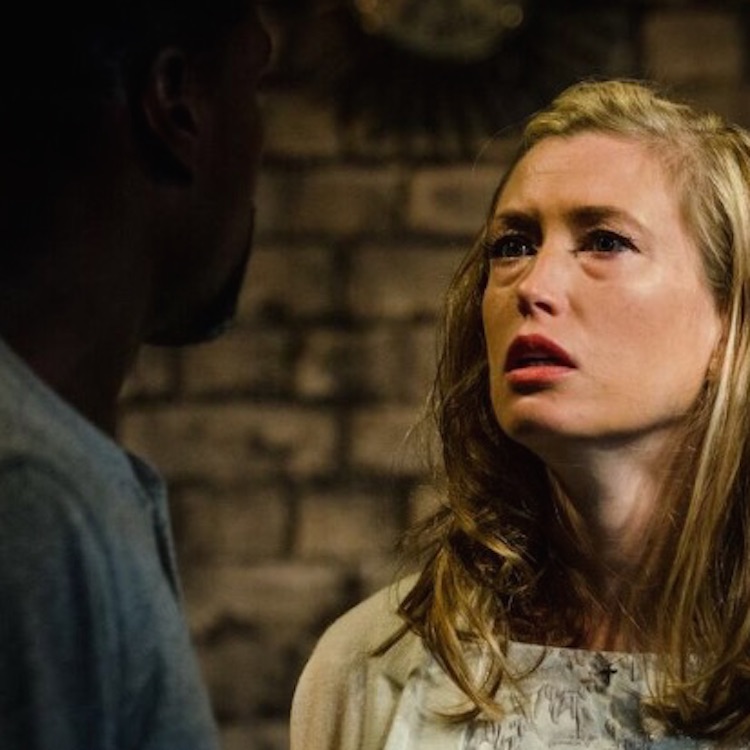