When does a derailed train cease to be an accident and become a telling act of God’s cruelty?

Perhaps just a short way into Peacock at the moment reclusive bank clerk John Skillpa’s (Cillian Murphy’s) reclusive existence is threatened when a train crashes in his backyard.

His home and the derailed train quickly become headline news, and the backdrop for a political re-election campaign. Unsettling the harmony of John’s dual identity that has remained a closely guarded secret, his second personality is out into the cold light of day where he must play out a lie that he’s ill prepared for, and one could be forgiven for subscribing to the belief that narrative cinema has its own Old Testament God who enjoys tormenting his characters.

Peacock plays to the beat of an older film; a nostalgic piece of filmmaking that has a classical air about it. Its identity is an amalgamation of genre, and similar to the painters brush strokes mixing together shades of colour, director and co-writer Michael Lander with his brush strokes mixes together drama, thriller, and psychological thriller, with a hint of psychological horror through the threat to identity as well as the personal physical and psychological space. His moving canvas is consumed with shades of genre that unlike perhaps classical filmmaking Peacock is a more decidedly playful exercise.

With film being one of the great collaborative art forms, it is difficult to watch Peacock and not have your attention drawn to the central collaborative relationship between Lander and Murphy, whose John and Emma Skillpa appears in every scene.

The quandary is that it leads you away from talking to any great length about the noteworthy and talented supporting cast that brings together Susan Sarandon, Ellen Page, Keith Carradine and Bill Pullman. The supporting cast, specifically Sarandon and Page understand this is not their film to steal but to offer dependable supporting performances for Murphy to play off and work his magic.

Alongside the responsibility of the narrative to suspend belief, a good deal of that said suspension is attributed to a compelling performance; of an actor or actresses belief in the authenticity of the staged space. Only through such compelling performances can an emotional interaction between a film and its audience be invoked, and which Peacock is successful at accomplishing, invoking a empathy and panic as we witness Skillpa’s world crash down around him.

In spite of a delayed release here in the UK, the release of Peacock strikes a timely chord though overshot its timeliness perhaps by a fraction. The reclusive lifestyle versus social interaction resonates with the current age of social media, where individuals are forced to contemplate how best to balance privacy with social candidness. Resonating most strongly with UK audiences, the derailed train is a metaphor for the recent press intrusion, by exploring how harmful and disruptive it can be when the cold light of day falls upon people’s private lives by impeding on the boundaries of privacy. Continuing the stroll down metaphorical avenue, Peacock serves as a critique on the extent to which the collective community can be an invasive and oppressive force upon those individuals with a preference towards a more reclusive or introverted existence. Without falling into preaching mode, it echoes the discussion of the need for privacy from a prejudicial and intolerant world that demands openness.

Minus the credits Peacock comes in at a brisk eighty minutes, and the intricately plotted dark thriller in which past revelations collide with the present forces one to question why more films cannot come in at ninety minutes or under.

Opening in a similar way as Martin Scorsese’s The Aviator, and with shades of Breakfast on Pluto, Peacock moves behind these associations to become its own film, and to sit alongside films such as Michael Powell’s Peeping Tom and Alfred Hitchcock’s Psycho at the destructive tendencies of the parent archetype and the crisis of identity in which the physical social world clashes with the subjective and private psychological world. 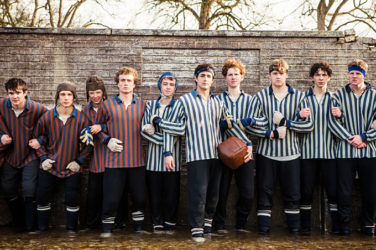