This Orientation is the first exhibition at Summit Gallery – a unique, new space in Hackney Wick, East London. Riccardo Iacono has been the artist in residence there for the last month. He expresses that he is “interested in environments that want to play and make a mess”.

This seems well suited to Summit Gallery’s ethos, an artist-led space that provides a platform for experimentation, research and collaboration. Instead of hiring a fixed set of gallery staff, Natalie Sanders, the director, has invited curators to work with different artists as associates.

FLUX visited the space to meet Riccardo and associate curator, Carmen Billows, to discuss the work.

This Orientation – exhibition detail 100213 from riccardo iacono on Vimeo.

FLUX: Carmen, tell me about how you came to work with Riccardo and Summit Gallery.

C: I’m a freelance curator, and was offered the opportunity to work with Riccardo Iacono on
a project for the space. I was curious about what his response would be to the space and the context, especially with his background in painting and abstract animation.

C: During the process of this project, Riccardo voiced his wish to go back to his early artistic roots in happenings and events. The work in the show is infinite and never accomplished, always open to new impulses and ephemeral in its existence. Everything is in a constant state of flux. He often deliberately leaves works unfinished, and failure can become the trigger for new ideas. I feel that this show is animated by the artist living inside. It consistently evolves and changes everyday. Riccardo not only readjusts and rearranges the works, but also consistently produces new video and photography in response to the changing space and audience.

FLUX: Riccardo – if your practise relies on being something that is constantly evolving, do you feel that people get anxious about not being able to rationalise it?

R: I’m very improvised. I think a lot of people have problems with the fact that I make things up as I go along. I change my mind a lot and quite like not knowing what is going to happen next. It’s very demanding for people who are used to getting work that’s finished. They know what it is and what it’s about. But if you like an artist’s work, then you have to understand that it comes about through different processes, and you have to trust them and what they’re doing.

C: If you have the confidence to hand it over and give him the responsibility then it’s a really productive and joyful experience. I never felt my role to be reduced. In projects where artists want to become more involved in the spatial concept and display of their exhibition, it becomes crucial for the curator to be the observer, adviser and facilitator.

FLUX: Do you envisage that at the end of the show, the space will look completely different to how it did at the beginning?

R: I hope so. I can’t stop playing; I see the whole process of presenting work and developing it as a live event. The work never ends. I deliver it, and then I become a participant in it, reading it, and sharing it with other people. The whole process of making and sharing work is a dialogue; it’s an interface, a way of interfacing with people, my environment and my past experiences. Perspectives and situations become interwoven. It’s very much an architectural performance collage. There is a high level of improvisation and interpretation in my work. I’m interested in social processes and participation. During the opening of the show I was still hanging pieces and I invited people to help me hang the works. It became a catalyst for discussion and feedback, able to stimulate social interaction. I like the social aspect of the gallery and how it sits among artist studios and workspaces.

FLUX: Riccardo has tended to work in outside spaces. How have you both interpreted this more traditional ‘white cube’ gallery space?

C: The location of the gallery on the fifth floor offered us the opportunity to observe the area from above and thus has functioned as an important source of inspiration. By painting the mural in the car park opposite, or attaching a banner with one of his paintings on a rooftop opposite to the gallery window, Riccardo bridged a gap between the inside and the outside.

R: I’ve tried to make the space as fluid as possible. Architecture can make people tense. I want to create an environment that can relax people and help them see. If you’re tense, it affects the way you see things. People do feel self-conscious in galleries; they are obliged to be quiet. I don’t want people to be inhibited. I initially wanted all the work to be in the external locations in the surrounding area, able to be observed from the vantage point at the gallery window. It’s to do with how the works can be transformed by a particular situation, space or locality. I’ve been talking to local businesses, tyre manufacturers, car dealers and bodyworks and interacting with people outside the gallery.

FLUX: The concept of seeing from certain vantage points – is that what you mean by the exhibition title ‘This Orientation’?

R: It’s a site-specific exploration of time and space. I have quite formal concerns about space and light, time and movement. My work is about the physical experience of space and spatial constraints. I’m inspired by Laban Dance and the notation system Rudolph Laban developed to explore the body, geometry and movement as ways to describe space. I’m also inspired by the composer Butch Morris. He referred to himself as a ‘conductor’ and referred to his hand gestures as “mid-air graphic notations”. The musicians would respond however they liked to these gestures and an improvised, physical and musical conversation would start.

FLUX: Some of the camera work displayed has been made previously in your career. Do you feel that it is productive to re-use and re-appropriate old work in new and different environments?

R: Showing old camera work was a way to make a connection between architectural projects and my current focus on how light is experienced in different spaces. What’s interesting for me about showing in galleries, or showing work anywhere, is that every time you see a piece of work, it changes. It changes because you have a past experience of it and the context informs and influences how you see it and how you engage with it.

FLUX: You often film on your mobile phone – is this for aesthetic reasons or because you’ve been inspired while out and about?

R: I enjoy chance; certain things interest me and excite me. I follow my instincts. I see mobile phones as miniatures, the cheaper the better. Everywhere I go; making a film kills time. I’m trying to explore eye movement and body movement with camera work and a lot of it is to do with geometry and throwing peoples expectations as well. Catching their attention and then steering them in different directions. These videos fit in with my current experiments with trajectories and light, which are quite formal concerns.

FLUX: Do you think there has been a movement towards contemporary artists working in digital mediums because, perhaps, traditional artistic practises have been exhausted?

R: I think there’s more connectivity between different processes and media now because people are able to connect digitally. Everyone is connected, everyone is talking to each other via a mobile, and they won’t even look at each other. Via this digital media, we become familiar with different forms of information sharing and sourcing. New languages are embedded in digital media. You find yourself immersed in a mixed reality, and it’s very easy to slip from one state of mind, from one orientation to another, with a few clicks.

FLUX: Is the live blog aspect of the installation your way of tapping into that digital consciousness then? For you, is the blog another artwork in itself?

R: Carmen invited Steven Ball to have a conversation with me in the gallery, but also asked if Steven had an alternative means to have this conversation. We have been having an online conversation in tandem with the show on the blog. I’m able to rework the online material and keep the project live that way. It’s also interesting because it blurs the authorship. The critique becomes an integral part of the work. It’s a discussion that springs from the work. For me, it’s a very organic, free flowing project, extending beyond the space.

Riccardo Iacono and Steven Ball (Artist and Research Fellow at The British Artists Film and Video Study Collection) have been discussing the exhibition via a live video and written blog during the show – http://thisorientation.blogspot.com.

There will be a gallery talk and screening in the space on the last day of the show, 17th February, 3-5pm as an artistic culmination of ideas explored during the last month.

The exhibition finishes on the 17th.

To find out more about Riccardo: http://www.riccardoiacono.co.uk/

To find out more about Summit Gallery: http://www.summitgallery.co.uk/ 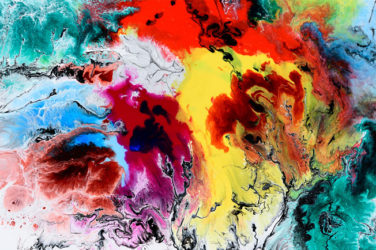 Four ways to introduce affordable art to your home

words Al Woods Image via Pexels Art is the single most powerful statement most ...