This is Albarn’s second production for MIF and a different beast entirely. While 2011’s Dr Dee offered gentle pop-opera, wonder.land is both fresh and old-fashioned, a sort of avant-garde panto.

This time, Albarn’s contributions are much more camouflaged in the collaboration. Unlike Dr Dee, where he sat stageside and strummed along, his signature wistful pop vignettes are here replaced by rowdy singalongs and thrilling 8-bit bleeps. This is wonder.land: the video game, Lewis Carroll’s dream-kingdom spelled out in internetese and his well-adjusted Alice replaced by Aly, a troubled inner city kid sucked into the game’s trippy algorithms. As a mixed race child with body image issues, Aly is far from the rich, white, entitled Alice of the original tale. And as with all updates, something is both lost and gained in the process.

“Here’s the rabbithole,” Albarn reportedly said in an early production meeting, pointing at his mobile phone. There’s something endearingly old-fashioned about this j’accuse moment – could wonder.land’s Luddite leanings be a sign that Albarn is getting old? In his version, the blurred edges of the rabbithole become the endless scrolling of touchscreens and everyone who logs on lands in trouble. Take Aly’s father, whose online gambling split his family apart, his online life ruining his real one. Similarly, Aly immerses herself in the game after being called a “fat bitch” by a clique of girls at her new school; reinvented in avatar as Disney’s skinny vanilla Alice, she find this world terrorised by bullies too, morbidly obese Tweedle-twins Dum & Dee. The Red Queen has now become teacher Ms Manxome (the baddie in Jabberwocky), a panto villain who voices Albarn’s technophobia in an inspired rant against cellphones (I particularly enjoyed “a weevil of evil”). Sadly, by reducing the story to Good (IRL) vs Evil (URL) and Wonderland to a finite game, Carroll’s weird, woolly world has swallowed the wrong pill and shrunk to the sharp-edged size of a satire.

Despite this, the source material is kept alive through the design and performances. In some moments conjuring Kazimir Malevich at Cabaret Voltaire, at others Vivienne Westwood’s proletarian royalty, Katrina Lindsay‘s costumes echo the wilder moments of disparate eras. And racing through sets that mix movable props with an immersive AR backdrop, the Cheshire Cat is Johnny Depp as Mortdecai while the white rabbit is a steampunk-rave mascot in balloon-animal ears and gas mask, gyrating like a game character while Aly picks her next move. The scenes where avatar-Alice flies suspended through the game are technically and aesthetically stunning, matched by performances from ferocious Anna Francolini as Manxome, Lois Chimimba as vulnerable, vivacious Aly and Paul Hilton as her dapper dad, who sings like Albarn and dresses like Russell Brand.

In an era when authenticity and identity have never seemed more at war – witness Rachel Dolezal’s racial ‘unmasking’ and the online shame industry exposed by Jon Ronson – wonder.land offers a zeitgeisty take on timeless teenage angst. While its edgy, avant garde palette clashes a little with Moira Buffini‘s slightly bland YA-aimed libretto and Albarn’s traditionalist score (he feels oddly absent, aside from the soundalike dad and the in-joke of Aly’s username ‘allypally32’), this is a ballsy and big hearted production, working best where it’s most ambitious, a Dada-does-Oliver Twist experience that tackles real issues like identity theft, bullying and addiction. 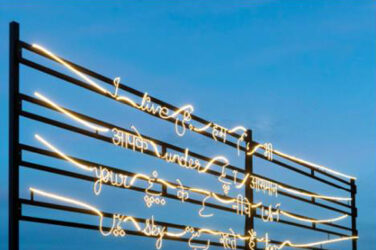