My name’s Gavin, and I’m a Cahunian.

My addiction to The Artist Formerly, and indeed Formally, Known As Lucy Renee Mathilde Schwob dates back to 2004. Serendipitously, given the here and now, I was asked to write a FLUX feature on an exhibition at the Manchester Art Gallery. It included some striking self-portraits taken by a lesbian surrealist turned Nazi-fighting résistante with a penchant for Marxism and androgynous pseudonym: Claude Cahun.

I did what any young scribe would and desperately over-researched the eight-hundred-word piece, reading everything I could get my hands on. I was hooked. Here was an artist practically unknown beyond the auspices of a handful of art historians, students and the narrowest of readerships. And yet, Claude Cahun is – to my mind then and still nearly a decade later – the most singularly fascinating creative spirit of the twentieth century.

Born in Nantes in 1894, Cahun was the niece of fin de siècle literary heavyweight Marcel Schwob and was later hailed by Surrealism’s ‘Pope’ André Breton as ‘one of the most inquiring minds of our time’. She also survived two World Wars – and, alongside her step-sister and lover Suzanne Malherbe, was a resistance fighter on their adopted home of Jersey in the Second. A writer of poetry and prose, self-centred curator of tableaux, a skilled sketch artist, photographer and muse, a poseur, actress and performer, composer of objets d’art, a propagandist and saboteur…she was nevertheless all but forgotten by the time of her death in 1954. Following Malherbe’s suicide in 1972, Cahun’s work was sold in a Jersey auction but has only in the last two decades enjoyed something of a renaissance – thanks in no small part to French historian and biographer François Leperlier.

My short book on her began as an attempt to explain not only how Claude Cahun vanished from history, but also the reason for her disappearing act. As a writer myself the instinct was to concentrate on Cahun’s few published texts and strip away the art historical narrative that has built up around her photography – for it’s with the latter that historians have, if they’re aware of Cahun at all, become preoccupied. Indeed, a disproportionate amount of time has been spent on only part of Cahun’s oeuvre – and her photography wasn’t in the vast majority of cases even intended for public scrutiny. Putting aside the images composed by Cahun for use in her literary works, along with one lithograph and illustrations for a 1937 children’s book, she only published one self-portrait in her lifetime. Still, to ignore Cahun’s visual output in order to pigeonhole her as just a writer would tell only half the story – perhaps more, but in any case not all. In appreciating what makes Cahun worthy of anyone’s time after all these years you can’t have one without the other – and to pay no attention to her photography would be, for want of a better expression, a bit thick. Some of her work’s astonishing.

Through every medium she employed, Cahun was willfully narcissistic in her quest for self-identity. As the centre of her own work, she refused to submit either to narratives or preconceived relationships of subject to object, while she returned the scrutiny of her audience – and her own investigations – with uncompromising effrontery. She sought to reflect rather than deflect, and never shied away from what was for her an unanswerable question: Who Am I? Rather than attempting to solve the mystery of Claude Cahun, therefore – by positing her, explaining her, and so somehow understanding her – I tried my best to ditch agendas, abandon narratives, and follow her lead.

Cahun was far from prolific. Of the work that survived her tumultuous lifetime and the passing of years since her death, the question of authorship (not to mention target audience) is by no means in all cases clear. She was the most unreliable of narrators, disingenuous, dissembling and deliberate in subsuming her identity while, on the surface at least, attempting to reveal it. But none of this matters, because to be a Cahunian is akin to addiction: to art for art’s sake; to the most unknowable of all things; to a life lived without compromise, with courage and conviction. When Marcel Duchamp said ‘my art is that of living’, he was talking about individuals like Cahun – for her life was a remarkable one, and a masterpiece unparalleled by anything she would ever produce on paper or through the lens of a camera. To us Cahunians, Claude Cahun is art.

This is adapted from Gavin James Bower’s Claude Cahun: The Soldier with No Name, published by Zer0 Books 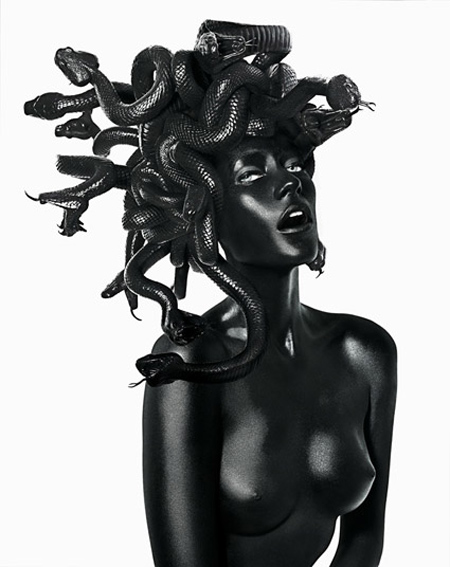 Fresh from LA, this new exhibition full of myths and monsters brings together two ...