Couple in a Hole film review by Paul Risker

There is a process of eternal recurrence in cinema through the storyteller and the audiences combined interest in specific themes.

And Tom Geens’ Couple In A Hole represents another point of recurrence with a tale centred upon a grieving British couple, Helen (Kate Dickie) and John (Paul Higgins) living an isolated and grief-stricken existence in the French Pyrenees.

The narrative fabric of the film is woven  out of such intrinsic human themes as interpersonal relationships, isolation and a sense of belonging, as well as grief and coming to terms with one’s past ghosts. But while Geens’ sophomore feature fuels the enduring nature of these themes within the storytelling tradition, for the filmmaker the underlying reason for this state of recurrence is a simple one: ” They are the big themes, and they are all we’ve got.” And so the raw naturalism of the Pyrenees offers this inquisitive yet sensory tale the quintessential spatial setting to explore the illuminating questions in the darkness of the human experience.

The title image of Couple In A Hole was the spark that propelled the world of the film and its characters into being. Yet in as much as film has been correctly defined as a visual medium, storytelling like life itself is constructed of a series of moments. And in as much the same way as these moments in life are often felt but not fully understood, so Geens taps into this same life like nature for inspiration.

Out of its simple construct a narrative is shaped that reaches a point of maturation through dramatic subtlety, and a precision of narrative devices that almost simmer beneath its surface, yet which can be evocatively sensed or felt. It is almost a narrative of natural being as opposed to an artificial narrative, which therein creates a synergy with the natural landscape. But here is a film that seeks an audience that will show an interactive awareness and drive to identify and understand emotions, both as a narrative device, but also as a means to construct character through an emotional undercurrent like affect out of which the story takes shape.

The opening of the film offers an impression of a director thinking pictorially. The first fifteen minutes are sparse on dialogue and non-diegetic sound, creating a pictorial-centric opening, but it is one which is immediately complicated by the presence of diegetic sound. The opening of Couple In A Hole cannot be defined as silent cinema without redefining silent cinema for contemporary cinema. The film’s lack of dialogue and conformity to a more traditional dialogue-centric approach not only echoes back to silent cinema, but overreaches it. This is attributable to Geens’ restraint or even reluctance to provide his audience with information, and while forcing an interaction if we are to understand and unravel the film, still manages to strand us as passive observers, at least in the opening. Of course this ties into our voyeuristic identity as spectators within cinema, and Geens with a little gamesmanship allows us to watch and see, but not necessarily see in the capacity of understanding why the characters are there; this information is yet to come. What is forged in these opening fifteen minutes is a contemporary revisionist form of silent cinema – silence but not ‘silence’ as it would have been defined during the silent era. Rather it is silence through the presence of diegetic and the absence of non-diegetic sound, and with a restraint on information, unlike the conveying of information through inter-title cards and heavy reliance on non-diegetic sound of the silent era. Films such as Couple In A Hole and Scott Graham’s IONA play with silent cinema in intriguing ways that does not linger in pointless homage as The Artist sought to, but shows it has still having a pulse, but a revisionist one.

Instinctively we know there is a reason the couple are seeking isolation in the forest, but John’s upward glance to the sky as a plane passes overhead allows us to instinctively sense the emotional conflict at his heart or rather infer it upon his silent thoughts. While they are there by choice it is not necessarily free will. Rather they have been driven there and this revelation will be the source of the drama, although it runs in one instance unexpectedly deeper and yet at the same time expectedly so. The instinctive identity also extends to the music – the pulsing music that reverberates like a beating heart and other musical interludes that are a fanfare of provocation or dramatic ripples that will shape the film.

Through Couple In A Hole Geens appeals to inferred instinct of the cineliterate audience, and a willingness to emotionally connect with and understand a sensory drama that slowly unveils itself. In one sense it has an explanation in as much as its filmmaker wants it to have, and yet it still requires an inquisitive and thoughtful audience to breath life into the film as storyteller, performers and audience merge to complete the film.

Couple In A Hole is released theatrically on Friday 8 April 2016.

Couple in a Hole film review by Paul Risker 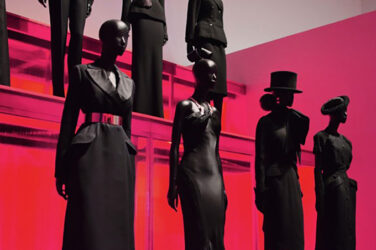 Fashion Movies Every Devote Follower of Fashion Should Watch

words Al Woods Not many creative mediums fit together as well as fashion and ...