The future of arts funding in the UK – words Al Woods

Are the arts going through a funding crisis? Many people in the sector will question whether there was ever a period when they weren’t, but it’s true that things have been difficult recently.

Some major sources of arts funding have begun to dry up at the same time as more fundamental shifts in funding patterns have been taking place. It’s a situation in which many organisations need to rethink the way they approach sourcing funds – and perhaps, make changes to the way they work.

Grants from government, private trusts and philanthropic organisations have long been the mainstay of arts funding but many small organisations fail to make use of them or are unable to compete effectively simply because they’re not sufficiently skilled at making applications. Getting any art grants for organizations takes time and patience. That creates a two-tier system where organisations which have established relationships with those funders can still enjoy some stable income, but where others are more vulnerable to the broader changes taking place.

For smaller organisations – and some big ones – the most important source of income comes in the form of donations from individuals. In recent years, economic uncertainty has made it harder to persuade people to commit to making regular donations, but one-off donations continue to flow. The National Funding Scheme runs a mobile funding platform that’s free to UK arts and culture organisations and acts like a digital donation box, letting people give money instantly whenever they feel inspired to do so. It provides donors with multiple options for giving while keeping things simple for the recipient organisation – and making it easier to claim gift aid.

Since 1994, the National Lottery has been a major source of funding for many arts organisations. This is especially true for smaller ones and grants for community arts programs that have benefited from its outreach and assistance with applications. Recently, however, significantly fewer people have been buying lottery tickets, so that source of funding has been much more limited. Unless we see a significant economic upturn or an end to austerity politics, this is likely to remain the case, so organisations that have depended on lottery funding in the past would be well advised to actively seek alternatives.

The arts face a further problem because of Brexit – European Union funding sources will no longer be available. Most of those programmes have shown generosity in allowing funding to extend for as long as possible, but once the process is finalised, no further grants to UK organisations will be made. It is currently unclear what, if anything, will replace this lost funding.

EU funding has been particularly important to underrepresented areas because of the EU’s policy of tackling localised deprivation. The Institute for Public Policy Research North recently found that £691m would be needed to make northern English residents as well off as Londoners where access to the arts is concerned. Though Scotland, Wales and Northern Ireland have their own funding organisations, it’s harder for Northern England to get the political leverage it needs to ensure it receives a fair slice of the cake.

Securing funding can also be a challenge for minority groups, and they also face losing out when targeted EU funding disappears. Although other funding organisations are more alert to diversity issues today and the public are more concerned about them, problems still occur: for instance, this year’s first round of Creative Scotland grants notably left out disabled people’s arts groups. As minorities can face discrimination in applying for more general funding sources, it is a problem that will need decisive intervention.

One thing helping minority groups to find more funding is the internet. Crowdfunding makes it easier for geographically distributed communities to come together to support arts and cultural projects, while sites like Patreon help individual creative artists to obtain a measure of ongoing support as long as they can create enough visibility around their work. Interestingly, this is influencing the way art is created. Film projects, for instance, now often begin with trailers, which are made to persuade people to donate so that the films they represent can be made.

Taking advantage of new approaches like this seems the best bet for a financially viable future for the arts in the long-term. Nevertheless, traditional grants and methods of attracting donations are likely to have value for a considerable time to come, so it’s important for organisations to get the balance right.

The future of arts funding in the UK – words Al Woods

Why steel frame buildings have stood the test of time

I have always viewed Marina Abramovic as experimenter first, artist second. The best of ... 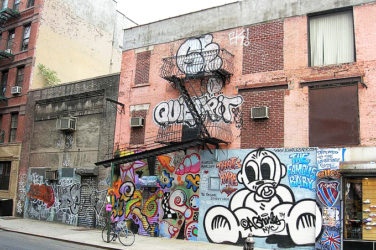 A brief history of graffiti art

words Alexa Wang Despite only really entering the public consciousness as a symbol of ...