“As the king is not humble, may the humble be king.”

Iris Della Rocca first travelled to Rio de Janeiro back in 2009 where she got involved with an NGO who helped disadvantaged children in the unpacified favela of Rocinha. She was adopted by a local family and became part of the family learning Portuguese within six months.

She was helping kids aged 6 to 16 stay off the streets after school through creative practice as on outlet to avoid the very real dangers they faced all around them mainly drugs, crime and being drawn into gang culture.


She hadn’t intended for this to become a photographic project but as she gained the trust of the youngsters she wanted to know more about them. When she asked them what about their dreams, their ambitions the replies were uncannily similar to answers she might receive back home in Paris. When she asked them “How do you want people to see you?” They replied that they wanted to be “Kings, Princesses, top models, movie stars and astronauts.”

Her resulting photographs of the kids she befriended are not the clichéd images of the downtrodden poor struggling to survive – these are striking portraits of brave individuals who have dreams. The photographs allow the character and pride of the people themselves shine through. We interviewed Iris about the series and the people behind the images.

How important was it to gain trust of those around you that you were photographing?

“My photographs are the result of a collaboration with people; I never take a picture without asking and I rarely take a picture of someone I don’t know. I connect with people, we share moments together and that’s how all my projects were born. It usually takes months before I take the first picture. For this series, I met an incredible man who has now passed away, Tio Lino who set up a small NGO named ‘Rocinha the world of art’ in the favela of Rocinha. We connected immediately, so I started working as a volunteer for him and that’s how I met the kids and began to bond with them. I had no idea that I would start working on a photographic project when I first went to Brazil, but living there gave me the inspiration, because I had something to say. They trusted me and I trusted them, they became my guide through the favela.”

Did you feel a sense of personal danger when taking photographs in the favela?

“The first time I went to Rocinha was 7 years ago and it wasn’t pacified yet – drug dealers, crime and guns were everywhere, it was suffocating of course. But when I moved into Rocinha I was with people born and raised there, who I really trusted so I never felt in personal danger.”

You travelled between Paris and the favelas often during this project. What was it like the contrast between the two as you travelled back and forth?

“After living there for 6 months it became like home – and whenever I returned to my mum’s house in Paris I couldn’t sleep because it was too quiet!”

Were the kids aware of their position in relative poverty and were their ambitions to get out of the favela or to change the favela itself?

“Well, all the favelas are different, I don’t know all of them, some are poorer than others, and some are better located than others. Rocinha is a privileged one because of its location in the heart of the city, close to the beach. Amongst its 70 000 inhabitants are varied social levels, some people are poor and others are less so – it is not a single status place. It’s like a city inside of the city, the people I know there are proud of it, and feel like they belong there. They do want to improve their everyday life but what they really want is an improvement of education, healthcare, social aid. Most of all to put an end to the prejudice they experience, and to get the same chances as others.”

Is it possible for the kids to avoid crime or is it just so much part of their everyday lives that they can’t avoid it?

“A very small percentage Rocinha’s inhabitants are or were involved in crime, most of them are hard workers and for the kids it’s the same, they know the consequences of being involved in drug traffic: the possible ends are often just jail or death. From here each child makes their own decision, but it also depends on how well structured their family is and how well protected they are from it. None of the kids that I photographed were involved in these sorts of crimes, but sometimes some members of their families – fathers, brothers, uncles – were.”

Were they aware of any prejudices aimed at them being poor and from the favela?

“As in Europe, racism, inequality and unequal opportunities exist and persist in Brazil. Coming from the favela these children do have less chance to access a better life, many are not educated as the system doesn’t permit it, but this doesn’t mean they can’t and won’t succeed in having a better life. These kids are inspiring as they are not the type to cry over their life, instead they celebrate everything they have!”

Have you keep in contact with any of the kids or know what happen to them?

“Yes I’m in contact with all of them, every time I go to Rio I visit them, and we talk on the phone and on Facebook.”

Iris Della Roca’s first UK solo show will now be presented at The Little Black Gallery, Chelsea by World Wide Women, the international and all-female artist collective of which she is a member. The collective was founded in 2012 by Anouska Beckwith and represents the free, indomitable spirit of women in the world of art today, with its 35 members mutually supporting one another through exhibitions and creative collaboration.

For more on the work of Iris Della Roca visit her website at www.irisdellaroca.com

The exhibition ‘As the king is not humble, may the humble be king’ takes place at The Little Black Gallery, London 14th – 21st March 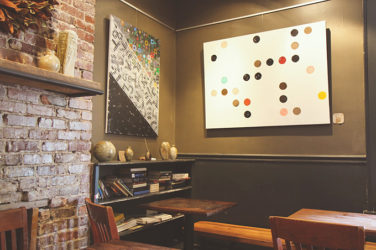