Our regular arts writer Philomena Epps decided to check out some key art shows whilst on a  trip to Japan. Here’s the second of her reports on the JR Exhibition – Could Art Change The World at the Watari Museum of Contemporary Art.

This is the first international retrospective of the French artist JR’s work. The exhibition is in chronological order – each floor of the gallery is dedicated to a different project.

JR refers to himself as a “photograffeur”; his work is characterised by large black and white photographs which are fly-posted in public locations. 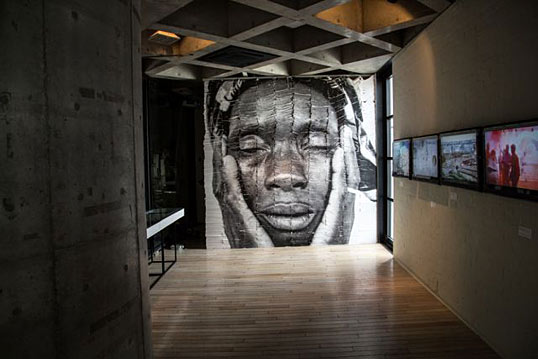 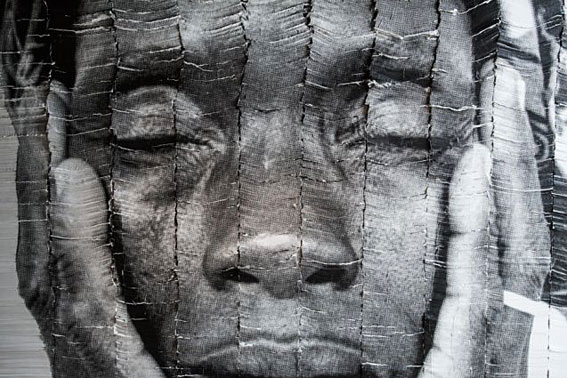 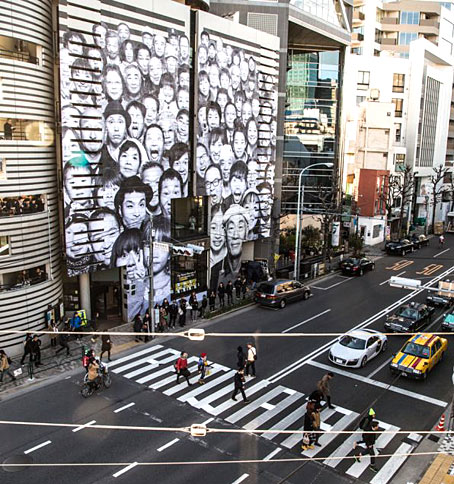 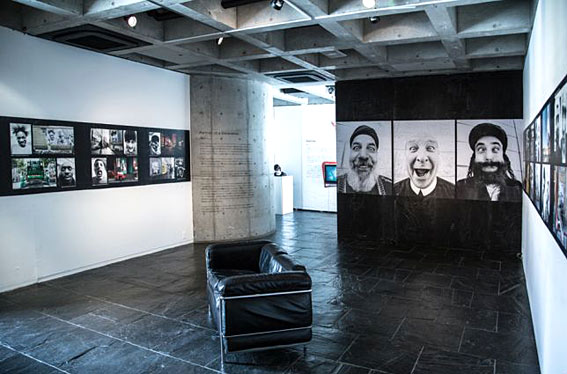 Despite his obscurity and deliberate anonymity, JR has travelled across the world, exploring current political and global issues; “rather than addressing his own message, JR’s activities aim…to activate communication among people in streets all over the world and enable them to address their own local issues”. A large pasting has been realised on the outside façade of the building. It depicts JR’s photographs of the inhabitants from the disaster-affected areas in North East Japan, where the tsunami hit in March 2011.

In Portrait of a Generation (2004), JR photographed the adolescent community involved in the riots in the Parisian suburbs. His photos questioned the generation’s negative representation in the media and provoked issues surrounding freedom and identity. Face2Face (2005) took these themes further. JR pasted portraits of Palestinians and Israelis doing the same job and pasted them side by side (‘face to face’) in large formats throughout the region. JR took his Women are Heroes (2008) project across the world, from India to Brazil. The film and photographs pay tribute to the victimisation and de-politicisation of female influence in society. The pasted photographs tended to focus on the women’s eyes, playing on the notion that “eyes are windows into the soul” and reinstating the power of a female gaze; “the women wanted their photo to be displayed in the heart of their own villages as a public declaration…and they were thrilled their images would be displayed in London, Paris or New York”.

The final part of the exhibition allows gallery visitors to become part of JR’s global project, Inside Out. The concept gives everyone the opportunity to share his or her own portrait with the world. The in-house photo booth means you can participate instantly, get your photograph taken and have it printed poster size. The original file is archived and exhibited online.
(Here’s mine… click here).

Could Art Change The World is showing at the Watari Museum of Contemporary Art. For more info on the JR exhibition click here