“I don’t know why there is this story of lying and illusion in my films” says French filmmaker Xavier Giannoli, whose seventh feature film The Apparition (2018) is a continuation of these themes.

Jacques (Vincent Lindon) is a war reporter, whose reputation as an impartial and talented investigator attracts the attention of the Vatican. Recruited to lead the investigation into a saintly apparition in a small French village, he meets the young Anna (Galatea Bellugi) who claims to have witnessed the apparition of the Virgin Mary.

As he begins his investigation, Jacques uncovers hidden motivations and pressures at work behind the devout girl’s claim, and his search for the truth leads him into a contemplation of his own life experiences and belief system.

Giannoli’s feature debut Eager Bodies (2003) told the story of a man who is given permission by his sick girlfriend to have an affair with another woman. Since, his successive films, including In the Beginning (2009) in which a con man meets a mayor he may not be able to con, and Marguerite (2015) in which a woman’s fantasy is kept alive by family and friends, has seen the filmmaker offer characters and interactions that define our memory of his work. The devout young girl and war reporter make for a memorable and appealing interaction, yet the following Anna draws also connects The Apparition to his earlier film Superstar (2012), the story of a man who finds himself suddenly famous.

In conversation with Flux, Giannoli spoke about the influence of religion and the cinema, how his work as a filmmaker connects to his previous career in journalism, and comfort in spiritual uncertainty. He also reflected on the role of music not only to communicate with an audience, but its capability to communicate more intimately our world.

The sophomore feature following his 2010 comedy Ceremony, Winkler has directed episodes of Clark and Michael (2007), New Girl (2013-14) and Brooklyn Nine-Nine (2014-16). Connecting his two feature films is the thread of impulsivity – the first about a character springing on his friend his intention to crash the wedding of a woman he still loves, the second, teens blackmailing morally dubious folk. 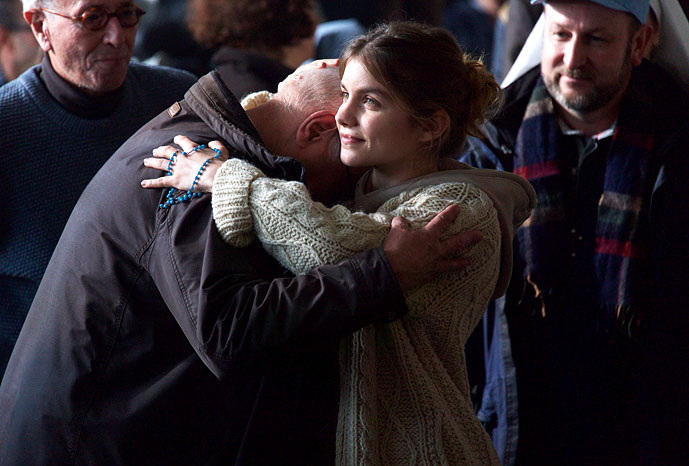 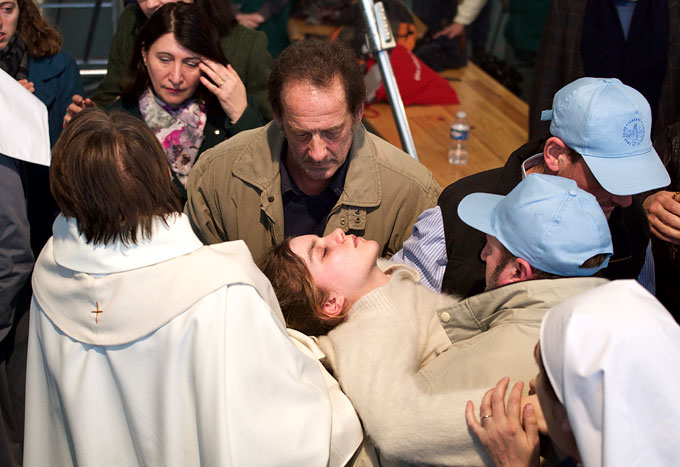 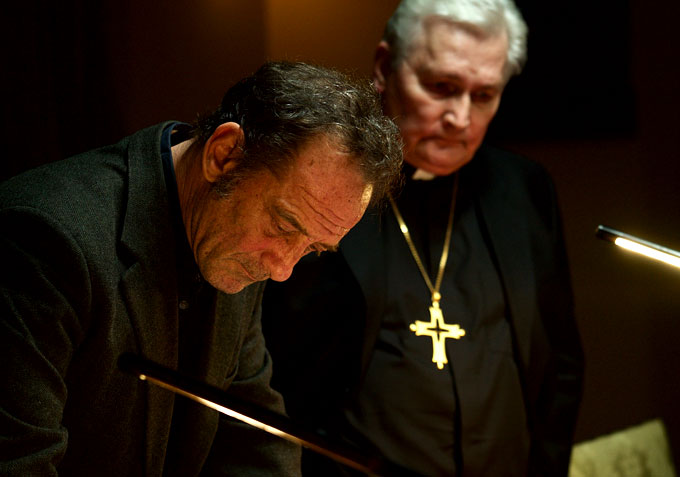 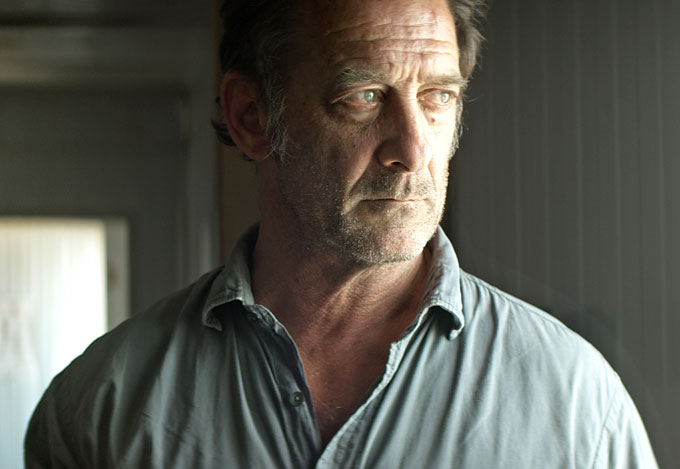 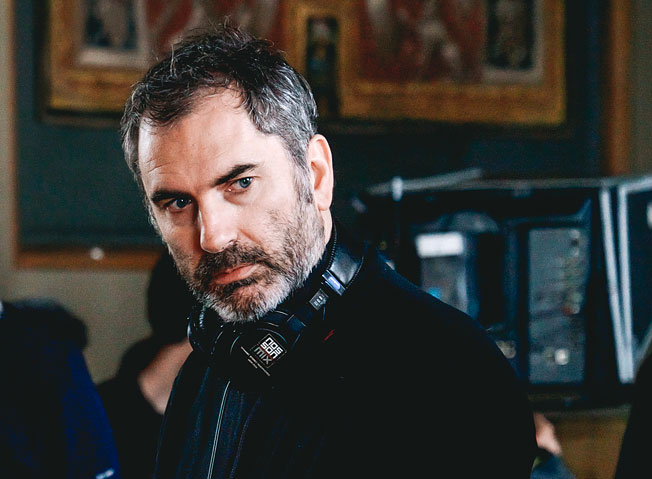 Why film as a means of creative expression? Was there an inspirational or defining moment?

I had a Christian education and as a very young child I remember the feeling that there was something more than the world we were seeing. And when I am watching something, there is something more. It was of course a religious education, the presence of God, but not only that for me because it was this poetic issue of living in the world where there is something I can see, and something I cannot. When a great director is filming someone or something, there is more than what he is filming. He is dealing with fact, but there is a poetic perspective in everything he is watching, and that presence of something more is what all artistic cinema is about. So I think for me it is connected to a religious education, and after that, there was something more simple.

When I was ten years old my father [laughs], who’s crazy, went with me to watch Raging Bull (1980) in the cinema. I was so shocked [laughs], but it was so fucking great. I remember this moment with the music, Cavalleria rusticana and De Niro, and for me these people were not acting. I was pretty young, but I remember watching this film that was in black and white, and for me it was real. I don’t know how to express it, but from this very precise moment I have gone onto make seven films, and all the time there is something about the truth and the lie; what is real and what is not? What can we believe in and what we can’t, and can we trust in someone and something in this world? And that is what I am trying to answer with a camera, and I can tell you that I don’t have the answer.

The Apparition has a central theme, but is the process of telling a story one in which you find additional themes emerge? Does this infer the organicity of storytelling, of the story expressing itself to its author through its own voice?

In my life I have been a journalist and I am the son of one. Not for this film in particular, but for In the Beginning (2009), the story of the guy who built a highway in the middle of nowhere, I found that item in the newspaper. It starts each time as a journalist with a very precise investigation. I go to different places that I scout, taking pictures, meeting a lot of people, and I will read some books, but all the time I need to have roots in reality. After that I don’t know exactly what the story is going to be [laughs], but I need to deal with fact, and afterwards I am dreaming about those facts while listening to music, which is very important when I am writing. For this film it was Arvo Pärt, and for me cinema is always a tension between facts and something crazy and poetic. It is to deal with something we can see and something we cannot see, exactly as it is in The Apparition. So cinema is a mystical issue, and this particular story was dealing with all of these topics. I don’t know why there is this story of lying and illusion in my films. I think it has something to do with education because when I was a kid in school, people were telling me stories about God, Jesus and miracles, and how there is something we can believe in after death that is in the middle of our lives. And maybe this is why I am always telling stories of characters that are dealing with truth [laughs].

Can we think of music as a means of communicating to the audience, but also as the actual voice of the film itself?

Oh, it is more than this. I think that if The Apparition is about whether we can believe or not, then this music believes in God for sure. It was unconscious for me, but in Arvo Pärt’s music there is something mystical. But it is very difficult to find a good word in English when talking about this music, and even in French it’s difficult [laughs]. There is something in the music that opens the heart and closes the eyes.

This film has the presence of being able to touch each individual member of the audience in an emotionally unique way. From the very outset up until the final scene, the music makes a strong impression that compels such an emotional resonance.

But you know, there is Arvo Pärt and there is another important French composer, Georges Delerue. At the end of the film when he’s going to find the little church in the middle of the desert, the music is by the latter. He composed the music for Contempt (1963) by Jean-Luc Godard, and I received a letter one week ago from Delerue’s widow telling me that she loved the film, and that was very important for me. You know why I am talking about his music? Because his music, the piece in my film, was not for film. It was music that he composed for a documentary about astrophysics, and it was very interesting because it was only scientists, and this music retains Arvo Pärt and the mystical issue, or the mystical perspective. But it was about technology and astrophysics, and I love this music because it opens the feeling of the film to the audience. For me if you are watching a Terrence Malick film for example, he’s always using Beethoven or Mahler, like Visconti or Kubrick. And I think there is something in this kind of music that can open us up to a mystical dimension of the images; it is like the unconscious of the visuals, and that’s why I always need this. And after, it is very important that a film has an audience. I don’t understand why there is this discussion of art film and commercial film. There are a lot of the films that I love that are masterpieces, and have had a large public audience. As I am saying this I am listening in my head to Wagner, used by Francis Ford Coppola for Apocalypse Now (1979), and so I think there is something with music that connects a film to eternity.

Interviewing filmmaker Christoph Behl, he remarked to me: “You are evolving, and after the film, you are not the same person as you were before.” Do you perceive there to be a transformative aspect to the creative process?

As a director of course, and I directed this film because I was trying to find some peace. I had lost someone I love, so I was dealing with death, and with my Christian education is there something or not? And I am living in a world where you can’t switch on a TV and not have people talking about civilisation’s crash, with the Muslim and the Christians, which is now a political topic. It was important for me to re-appropriate all of these questions and to deal with a very intimate problem, and I know that the doubt about religion is not a problem for me anymore. I love the mystery, and I am not looking for proof or an answer. And after this film, I feel good because I don’t know.

The Apparition is in cinemas now across the UK courtesy of MUBI.

So…Soap! Is the collaborative creation of Hong Kong’s SLOW and CoLAB, featuring at the ...

words Hugo Marx A look at the current Tate Britain exhibition by a man often ...