A winter trip to Venice should be filled with atmosphere and drama, and this year we got just that from our stay at the Hilton Molino Stucky Venice.

A visit to Venice is always memorable, but I think our trip this year will be the most memorable of all for all the right reasons.

Arriving on Monday 29th October – the night the lagoon city saw its highest acqua alta since 2012 – we arrived in the middle of the storm with high winds buffeting our aircraft as it touched down at Marco Polo.

At this stage we were woefully unaware of what lay ahead, but that things were not quite normal soon dawned as we queued for tickets into the city. Ahead of us were shaking heads, all taking an age to decide what to do about their different predicaments. Many were told they would have to wait out the night in Mestre on the mainland, before hopefully heading in to the city tomorrow at low tide.

Luckily for us, we had a reservation at the Hilton Molino Stucky whose location across the Canale Giudecca from Piazza San Marco turned out to be to our advantage in the storm. It’s always atmospheric to arrive in Venice, and this time was to be especially so. A bus ride and a walk later, we were joined on our rocky vaporetto ride by Venetians adorned in raincoats and wellingtons whilst we were in normal shoes with suitcases and two young children. Still unprepared, we missed our vaporetto stop before finally disembarking to a floating jetty bouncing in the wind. Only when the boat pulled away did we realise that to get to the hotel we had to descend from the jetty to a canalside knee deep in the flood waters. We could see others scuttling along the waterfront in the darkness – it was clearly not dangerous if you kept away from the canal edge – just very wet! Without any other options, we waded in and paddled through the watery night towards the hotel. We could see the huge building in the distance, eventually emerging from the dark to create enormous puddles in the foyer as we checked in. Thanks to the very understanding reception staff and cleaners with mops!

Because of Venice’s unique position as an island criss-crossed with canals, the city is, of course, very sensitive to high tides. The floods have increased in recent years, due to land reclamation on the mainland and island dock areas, and the deepening of shipping lanes all affecting the way water enters the lagoon. You might think all this means the city is sinking, but the yearly pictures of a flooded Piazza San Marco are misleading. In all but the worst floods (like those this year) more than 90% of the rest of the city remains above water.

It’s not good news though, as every time water seeps into the porous brickwork, all over Venice walls are dissolving. Global warming sea level rises will mean the situation gets a lot worse. It’s a subject of consternation to the city residents, who have been frustrated by years of delays to the MOSE lagoon barrier project that will protect the city, and at the latest count is expected to be completed in 2022. This will hopefully mean a welcome end to the flooding in the city and a much needed reprieve for the longevity of the architecture. It may also mean opportunities to experience the acqua alta in the magical city disappear so although it was not planned, we were thrilled to encounter the acqua alta at the peak of its spectacle on this trip.

Once a flourishing flourmill, Hilton Molino Stucky Venice has been beautifully restored by the Hilton Group and offers a different perspective on the magical city. Located right on the Canale Giudecca, the hotel’s façade, which is wonderfully lit at night, make it a landmark in its own right. The façade and foyer retain the aesthetic of the original building, whilst the 379 rooms are generously sized and modern. The hotel boasts one of the few swimming pools in the city – stunningly located on the rooftop – open throughout the spring/summer season, and bars and restaurants of the quality you would expect from a Hilton. Away from the busy tourist spots of Piazza San Marco and the Rialto Bridge, the hotel is far enough away to feel secluded and exclusive, yet amazingly well connected by the hotel’s shuttle boat service that runs every 20 minutes or so and takes about 15 minutes to drop you metres away from Piazza San Marco so you are only ever half an hour away from the tourist hot spots. It’s actually a brilliant way to get a feel for the city, and to bob about amongst the gondoliers as you cross. Giudecca is great to explore in its own right too if you want a taste of a less touristy side of Venice – with fabulous eateries along the canal front offering amazing views over the Guidecca Canal to the backside of Dorsoduro and the fabulous church of the Madonna della Salute standing on Dorsoduro’s heel as you turn into the Grand Canal.

The next day, after breakfast in a buffet with so much choice of beautiful fresh produce you felt like you’d walked in to a massive Italian deli, we headed straight to the Hilton shop and purchased four pairs of disposable wellies – all in super bright colours. We headed off to grab the shuttle. Outside it was like another world compared to the drama of our arrival. Although it was late October we were treated to blue skies and mild temperatures so in fact could have avoided the footwear purchase.

We spent the next few days exploring a Venice that due to the time of year was not too busy, or too hot. From Saint Mark’s Basilica to the Rialto Bridge, we took in all the tourist sites. It’s a city that alongside its wealth of historical sights and atmosphere, has a massive contemporary art influence. Home to the Venice Biennale, whose famous art strand runs from May to November each year, you can’t miss the billboards advertising shows by artists big and small if you visit in this period. We stumbled across Ai Weiwei’s Gilded Cage installation at the Fondazione Berengo on the Saint Marco side of the Accademia Bridge. It’s a powerful piece, originally appearing in New York’s Central Park, before relocating to one of Venice’s most beautiful gardens on the side of the Grand Canal. Here, as in New York, visitors are able to experience first-hand the sculpture’s power by walking through the cage and its turnstiles. We also crossed the bridge to explore the bohemian Dorsoduro district on foot, with its artistic shops and restaurants. Dorsoduro is home to the Peggy Guggenheim Collection located in an unfinished 18th century Grand Canal palace. It’s a richly rewarding visit in its own right with its permanent exhibits, but particularly so for us as we got the chance to see over one hundred works laid out over eleven galleries retracing the disruptive artistic path of Osvaldo Licini (1894 – 1958), a major protagonist of Italian and international modernism in the show ‘Let Sheer Folly Sweep Me Away’. If you visit the Guggenheim, make sure you hang out for a while on the Grand Canal terrace taking in the stunning sweep of the Grand Canal and watching the boats go by.

Returning throughout our stay, the acqua alta treated us to a flooded Piazza San Marco time and again, filling slowly from the huge central stone plugs as the tide came in. This was to the delight of the children who insisted on donning their wellies every time and splashing through it, most excitedly in the dark in the shadow of the lit up Basilica. We waded through water to get in to the Basilica when we visited – its golden interior always awe inspiring was particularly so in the wet conditions.

On our last night, the eight floor Skyline Rooftop bar at the top of the Hilton was getting in the mood for a Halloween party, with staff painted as ghouls and witches and the inside space strewn with cobwebs and lights. Venice does not really do Halloween, but if it did, it would be amazing let’s face it. The outside terrace of the bar has fabulous views of the city – and fantastic cocktails. Eating at the hotel’s Bacaromi restaurant was also a treat with its traditional Venetian cicchetti dishes. We ate inside, but in the summer the restaurant spills out onto a canal side terrace, with great views over to Dorsoduro.

It was a fabulous trip, made all the more memorable by the Hilton Molino Stucky Venice and the floods. Don’t think you should avoid Venice in the winter months as experiencing the acqua alta is a totally memorable, atmospheric experience. Instead come prepared with ponchos and waterproof shoes, and if you do hit a particularly high tide, street vendors will soon be out with all you need to make sure you can still make the most of the city. The Venetians are actually very well prepared and when floods are forecast, elevated platforms instantaneously appear to make sure the city does not grind to a halt. Only the most impressive of high tides actually stop things here. But maybe like we did choose a hotel on higher ground just in case! 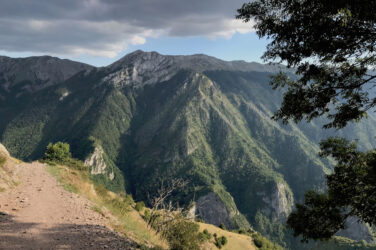