All writers know the importance of a great title, and it’s something many writers struggle with; but Harland Miller has turned his knack into an art form. Born in Yorkshire in 1964, Harland Miller is one of the leading Figurative (artwork that is inspired by real-life object and sources) artists today.

Miller left Yorkshire in the 1980s to travel the world – spending large amounts of time in Germany and the USA, specifically New York, where he moved to for a time.

Returning to Europe in 1992 Miller settled in the newly reunified Berlin, where he began writing in earnest. By 1994 Miller had moved to Paris; exhibiting some of his artworks at the Galerie Louis XIV.

In 1996 Miller finally returned to the UK, where he continued to write and paint; going on to study Art History at the Chelsea College of Art (which has seen the likes Surrealist Leonora Carrington, illustrator Quentin Blake, art critic John Berger, war artist Paul Nash, and YBA Gavin Turk among many others pass through its doors) in 1998.

In 2000, encouraged by the onset of his father’s degenerative disease and his desire to start noting memories down, Miller achieved critical acclaim for his debut, semi-autobiographical novel Slow Down Arthur, Stick to Thirty, which followed a young boy travelling the lengths of England with a David Bowie impersonator. That same year, Maria Alvarez said in an article for The Telegraph, “Harland Miller is an ‘It guy’, a mini-legend in his own extremely laidback lunchtime,”  — listing Miller’s friendship group, which includes the likes of Jay Jopling (famous YBA dealer, collector and founder of The White Cube galleries) and Jarvis Cocker, and that he has modeled on the Paris catwalks. Alvarez also praises him for his skills as a painter and a writer, and his ability to ‘self-invent’. As friend and artist Max Wigram said, “Harland never follows fashion, fashion has followed him. He’s always had the same style.”

2001 would prove a pivotal year for Miller: influenced by Pop Art, Abstraction and Figuratism, through Miller’s exploration of ‘the disconnect between representation and reality’, he embarked on a series of witticisms that combined his writerly love of text with these artistic movements; and using the template of the iconic orange and white Penguin book jackets of the 1950s and ‘60s, Miller set out on a quest to create his own library paintings and sculptures, rendered in oil and photo-real down to the occasional tea stain and tear along the spine; these paintings would go on to become Miller’s trademark.

“There are lots of aspects to the Penguin classic that inspire me visually,” Miller said in an interview. “I love it as a colour field.”

“There are lots of aspects to the Penguin classic that inspire me visually,” Miller said in an interview. “I love it as a colour field. One of my favourite artists is Rothko. If you look at a lot of Rothko, when he got into the maroon phase he was dealing with a lot of oranges and this redness of orange. There is a Rothko which is essentially a Penguin book . . . the same format – the orange-white-orange – just without the graphic furniture.” His ‘Penguin book’ paintings usually feature Miller as their author; but occasionally he makes little jokes about real authors, which have proved very popular, for example: Animal Husbandry – Charles Buckowski, was estimated at between £15,000 – 20,000, it sold for £32,500; with Ignore All Alien Orders – Aldous Huxley, the estimate was £25,000 – 35,000 and it achieved a whopping £60,000 at Phillips Auction House.

In regard to Penguin’s reaction to Miller’s figurative interpretation to their legendary design, Michael Stott writes in the Financial Times, “At the outset, the artist worried about action being taken against him for copyright infringement. Years ago, Penguin even hinted at a possible lawsuit. But the book publisher never sued, perhaps mindful of how the Campbell Soup brand benefited from Andy Warhol’s now-legendary pop art reinterpretations of its cans. Instead, it embraced the artist.”

Miller’s paintings have become popular because of the skill he demonstrates in rendering the beautifully worn dust jackets and his original take on such a well-known brand; but also in the sardonic wit he displays in his ‘titles’ (swear words abound so you may want to cover your mother’s eyes). The titles of his paintings including This Is Where It’s Fuckin At and Don’t Let The Bastards Cheer You Up – some working best side-by-side such as Fuck Art Lets Dance which was exhibited next to Fuck Dancing Lets Fuck..

In 2002 Miller was the Boston ICA’s writer in residence. His events were often informed by his experience in both literature and fine art, including a whole season devoted to Mr. Macabre himself, Edgar Allen Poe — a highly influential figure in Miller’s life, as he proved in 2008 with a collaborative exhibition we will return to shortly.

By 2003, Miller had exhibited his first one-man show, To Jean – A Small Memento of a Great Effort, at the White Cube Gallery, which had a stellar reception and from there on, his profile has continued to rise exponentially.

To commemorate the 200th anniversary of the death of Edgar Allen Poe, in 2008 Miller collaborated with numerous contemporary artists in his exhibition You Dig the Tunnel, I’ll Hide the Soil, where he asked the artists to create a piece of work in response to a piece of writing by Edgar Allen Poe. Of the piece Miller collaborated on with Tracey Emin, he said, “I really like it because I can’t tell which part she did, and which part I did. Maybe that’s because she painted over all the bits that I did …”, to which Emin replied, “I think I did paint over them, yeah definitely; but it was a true collaboration because you stood over me while I made the painting.” The exhibition took over two venues, White Cube and Shoreditch Town Hall.

In 2016, Miller took a bold step away from his much-loved appropriated Penguin dust jackets and exhibited his first solo exhibition, Tonight We Make History (P.S. I Can’t Be There), in Germany. This exhibition marked 25 years since the (now) London-based artist lived there, and featured large-scale works, again with the intention of book covers, but using his own designs inspired by 1960s and 1970s pop psychology books; with titles such as: Overcoming Optimism, Back on the Worry Beads, Health and Safety is Killing Bondage, I’ll Never Forget What I Can’t Remember and Happiness, The Case Against – the titles often reinterpreted in different designs; as the Blain Gallery says, “Often the same text appears on different compositions, demonstrating how form and colour relationships can change the way in which titles are interpreted. Interspersed between the larger paintings, a number of smaller works act like punctuation marks.” The twenty two works on display were on sale for between £30,000-£80,000, so far we haven’t seen them reappear on the secondary market, but when we do can expect to see a marked increase in price when they do.

Some of Miller’s most successful auction results include This Is Where It’s Fucking At, which was sold along side Grayson Perry and other luminaries of the contemporary art world at Sotheby’s Contemporary Art Fair in 2016 – the painting was estimated at between £20,000 – 30,000, and sold for £75,000. An equally underestimated piece appeared at Philips Auction House: I’m So Fuckin Hard (Ernest Hemmingway) which was estimated at £20,000 – 30,000; it sold for £50,000.

As Joe Syer from MyArtBroker (an online art market who connect people selling Harland Miller artwork with people wanting to buy it) points out, “Demand for Harland Miller prints  has hugely increased in the last 6 months — This Is Where Its Fuckin At, for example, is one of the most requested — so there have been some strong auction results, as well as a few low edition releases. Prints and prices can range from around £2,500 – £35,000 – it’s still possible to pick something up for a fairly reasonable price.”

Over the years, Miller has exhibited at some of the most prestigious galleries in the world: Group exhibitions include Royal Academy, London (2006, 2005), Kunsthalle, Mannheim (2004) and the ICA, London (1996). Some of his notable solo shows include Dear Son, This Is One Of The Last Of My Few Remaining Pre-Marital Possessions – Look After It Won’t You…Love Dad, at the Marian Boesky Gallery, New York; I’ll Never Forget What I Can’t Remember, at The Reflex Gallery, Amsterdam; Butterside Down, at the Galleria Maribini, Bologna; and the aforementioned You Dig the Tunnel, I’ll Hide the Soil at The White Cube, London.

In an interview in The Guardian with his friend Jarvis Cocker, Miller explains why he thinks Penguin chose a penguin or pelican or their logo, and why Miller chose Penguin and Pelican (the non-fiction branch of Penguin) for his now-renowned artworks, “…the intention was to bring books to “the people” – to cheapen the erudite and elitist stuff into looking less intimidating, so pursuits such as bridge could be mastered by anyone. Even if you didn’t have a drawing-room, you could still play a mean rubber.

And penguins seem to share this “all in it together” trait, with their thousand-strong hug, and they appear to have, or we ascribe to them, characteristics we like to think of as human. For all that, we don’t see them squabble. Then the Pelicans, which were essay-based, addressing social problems, were like a bird swooping over a landscape, going in and picking things up in its large, pendulous bill. These Pelican paintings, the ones I’ve called “the bad weather pictures”, are largely about where the work’s coming from culturally – basically the north-east of England. These are all places you know something about, too, and where a lot of your songs are set.”

Rumour has it that a catalogue raisonné of Miller’s work will be released by the Lyndsey Ingram Gallery  later in 2017, as well as a recently announced Harland Miller exhibition opening at White Cube.

Best car apps that can really make a difference 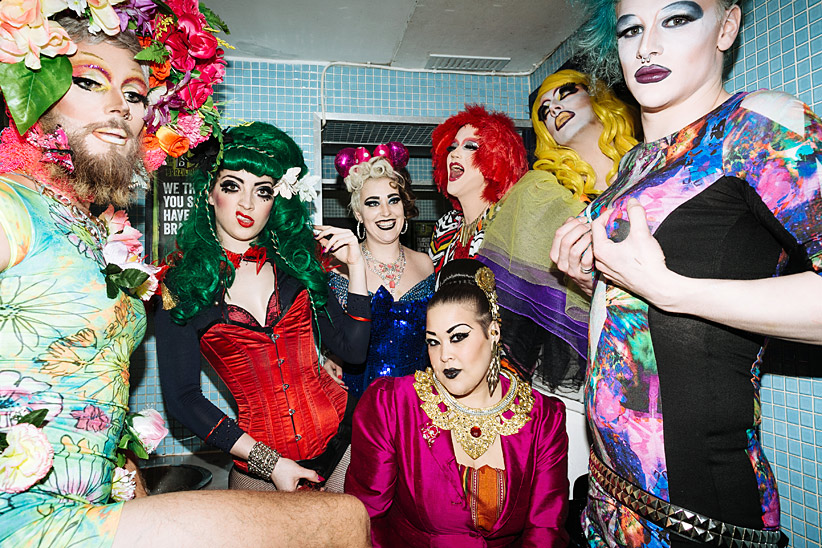 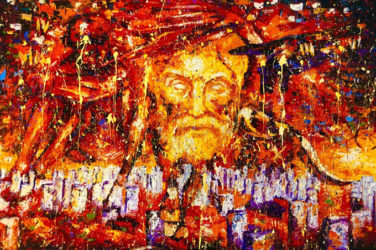 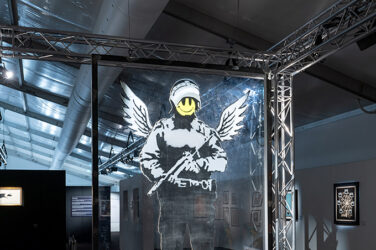 The Art of Banksy Exhibition

words Danny Lamb ‘Art should comfort the disturbed and disturb the comfortable.’ – Banksy Whether ...