From the distant silhouette of a Lancaster bomber glimpsed over a British seaside resort, to the hidden world of global arms trade fairs, The Home Front explores links between militarism, marketing and entertainment. Made over four years, this is the international premiere of photographer Melanie Friend’s major new exhibition, on view at Impressions Gallery, Bradford, from 14 September to 23 November.

The following is an extract from the accompanying book, which is published by Dewi Lewis in association with Impressions Gallery, available from early October from the Gallery.

A family snapshot: taken by my father in the summer of 1980 at an Air Day at Royal Naval Air Station Culdrose in Cornwall, where he served as a non-commissioned officer and aircraft engineer. My ten-year old sister scowls, having scoffed her ice cream, whilst I dawdle over finishing mine. Behind us is a Harrier Jump Jet that within two years would be deployed in the Falklands Conflict, but we seem unconcerned by its presence at this day out. 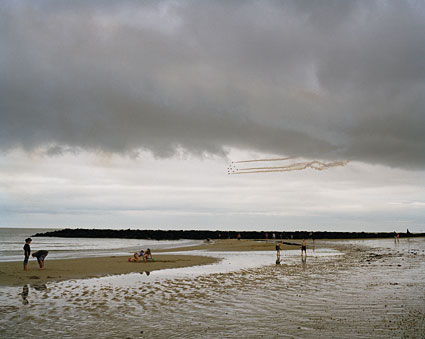 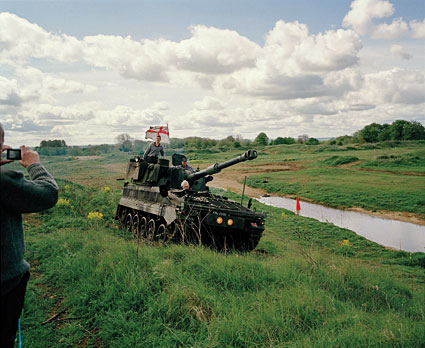 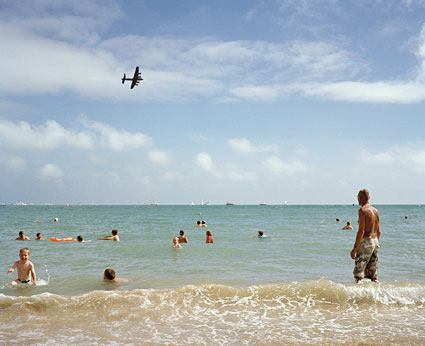 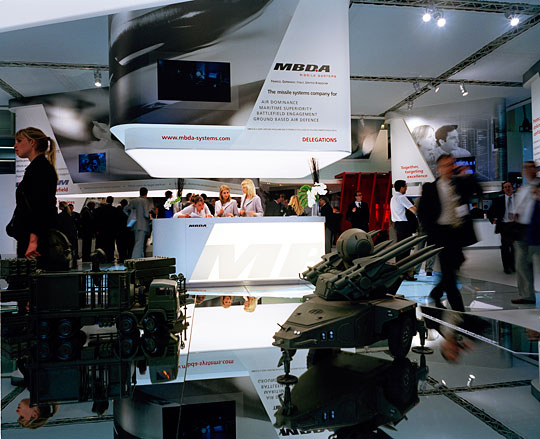 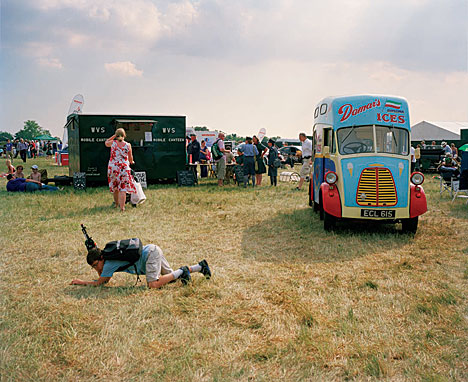 We had grown up in a forces family; my mother was a former Wren and radio electrical mechanic in the Women’s Royal Naval Service. To my sister and I, airshows had the atmosphere of fairgrounds, with snack stalls and ‘rides’ in cockpits; they were an intrinsic part of our childhood together with interminable television broadcasts of The Royal Tournament and bodged Airfix models of Lancaster bombers. I confess that until I encountered Melanie Friend’s photographic series The Home Front (2008 – 2012), I had never noticed quite what was going on in this family snapshot, or in our leisure activities more generally. The incongruity of a pleasurable day out spent amongst military technologies was suddenly rendered visible.

This collapse of the family snapshot into the territory of the war photograph is consistent with The Home Front’s collapse of assumed boundaries between leisure and militarism, battle zone and civilian territory. Made over a four-year period, the series depicts air shows for civilians held in Britain at sites from Dawlish to St. Andrews. Air shows have been staged in Britain for over a century, reflecting the public’s growing interest in aviation following the Wright Brothers’ pioneering flight in 1903. The first British airshow took place at Bournemouth in 1910, with the first Royal Air Force Pageant at Hendon a decade later in 1920 Around eighty shows are now held in Britain each year, with an estimated total two million attendees. Organised by a wide range of civilian and military, private and public, commercial and volunteer groups, air shows serve varied ends: as trade fairs, sporting and charitable events; for the promotion of tourism (especially at the coast); for education and historical purposes; and as memorialisation of past conflicts. Promoted by the Ministry of Defence as ‘a thrilling and memorable day-out … with a range of family-themed attractions on the ground complemented by the airborne excitement’, air shows also serve to offer the military a blend of opportunities for public relations, recruitment, and commemoration via the showcasing of war technology.

Whilst for aviation enthusiasts the obvious focus is the aircraft, Friend turns her camera onto civilians observing the military spectacle. Divided into two distinct but related groups of images, The Home Front comprises vistas of seaside resorts that form the backdrop to aerial displays, as well as images at closer range depicting visitors to the air shows’ ground level attractions. Taken as a whole, The Home Front might be considered part of a photographic tradition that affectionately documents the British at leisure, from Benjamin Stone’s Festivals, Ceremonies and Customs (1906) to Tony Ray-Jones’ A Day Off (1974). Upon closer inspection, however, Friend’s work reveals a more troubling layer: a view of what she terms ‘war at the point of sale’, and an attention to the overlooked ways in which militarism is reconfigured as entertainment in the civilian sphere.

Hotel de Russie – The Secret Garden in the heart of Rome 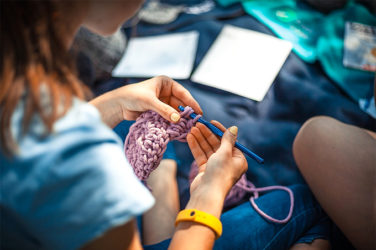 Why arts and crafts is a great stress reliever

You can probably recall being a child and really getting into the arts and ...