His work permeating shock and sex, Joe Machine salivates life through painting. Primarily focused on death and forced lust, the work of this British artist draws us in, but leaves us wincing. Turning his childhood exposure to pornography and violence into his trademark pictures of sailors and bloodshed, there is a raw truth in the images laid out before us at the gallery. 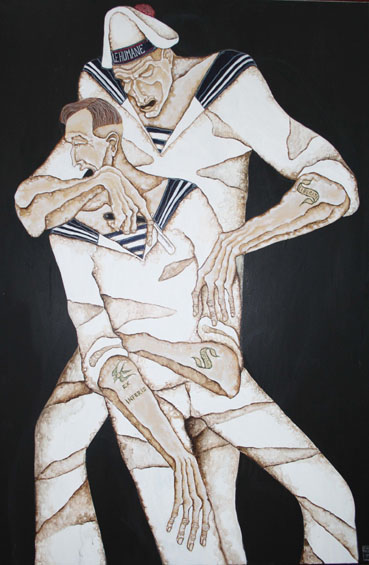 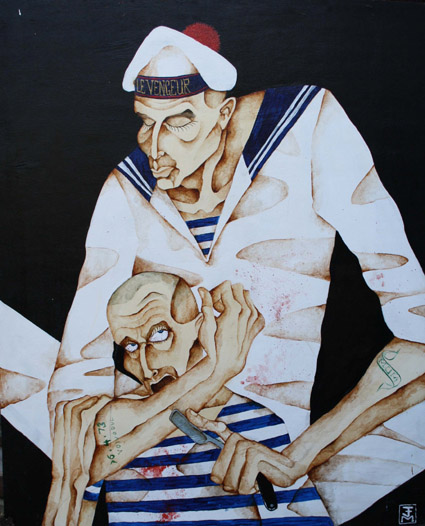 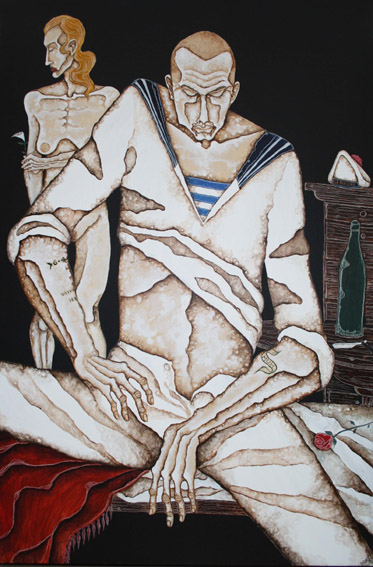 “Looking at the uncomfortable is something we should all do. If there is no ability to reflect, you’re up shit creek as a human being and any self gratifying act is possible. It’s good to be liked for the right reasons, but this is just form. Intent is what matters, nothing else.”

Joe Machine comes from a Romany background, born on the Isle of Sheppey, with his young life as a boy was spent in the seaside town of Chatham, Kent. He began working as a six-year old, absorbing the moves of men on the streets after nights of heavy drinking. Much of his work is dominated by a recurring sailor theme with a young Joe actually exposed to many of the violent escapades enacted in his paintings. The sailors are all of a painfully thin build which Joe told me was influenced by his grandfather, who was quite poorly when Joe was a child and died when Joe was just seven.

I began the evening delving into why his work embodies such a raw sexual content. One of the paintings entitled ‘The Embrace’ was of Joe literally embracing his wife in a sex act from behind which he told me embodied the man he used to be. His witnessing of violent sex as a child seemed to have determined much of his later life and the relationships he initiated with the opposite sex.

“The men I used to see viewed sex as a means to an end and nothing more.”

Joe Machine’s artwork has a deep vein of sadness but also encapsulates the therapeutic power of creativity. Joe told me the story of one of the first defining moments in his life when he was punished in school for drawing a picture the teacher hadn’t approved of.

“To get a reaction like that, whether it be good or bad, meant that either way someone had noticed what I’d done.”

This was pivotal in Joe’s life and future career as it meant he was doing something that evoked thought and action. Joe revealed he had later stabbed the teacher for her negative feedback.
I asked Joe whether if he were to do a self portrait, would it mirror the violent sailor imagery surrounding us. Joe went on explain how every painting he has ever done is a self portrait.
I began the interview with some anxiety given Joe’s reputation as a young man and with preconceptions of a man obsessed by sex and violence. I discovered Joe to be a very loving and fearful being. He fights and approaches these fears through his work.

“The best way to triumph over fear is to go head first into it, and ask your questions when it’s done”.

At first glance Joe’s work can seem uncouth and grim, but on reflection you begin to see the fearful six-year old in every painting. Joe is also a poet and writer and during the interview he took out his book of poetry, and read me a poem he had just written, entitled ‘1979’ which bled out his young childhood of violence and fear. I couldn’t help but feel warmed by Joe and his incredible work.

See joe-machine.com. A book of short stories entitled ‘Unseen Animal’ is out now.

From time to time we have all been overwhelmed by the number of paintings, ...

Micko Westmoreland’s latest track ‘Schmescos’ is a riotous post-punk celebration, an investigation of the adrenaline-soaked ...