Imagine you’re a magician and being allowed to bring through some hocus-pocus, a new type of music into the world. So you’re chucking ingredients into your cauldron, a leg of a frog, some wolf spit, the venom from a Black Rattlesnake. A puff of smoke and an eggy smell. The results? This song sounds like it has risen from the swamps. Stingingly infectious melodies but raw and gravely coated in mud. Imagine if Tom Waits and Mark E Smith had corrupted the Beach Boys. Surfing-on-mud type music with a hook and a bawdy punch. If you were that magician you’d be proud of your abilities if you’d managed to conjure up the Ganglians and their stirring sound.

Creative core and lead singer Ryan Grubbs of the Sacramento-based band describes the heart of their second album ‘Still Living’ in this way.

“This is outsider music, but with a pop sensibility that brings everyone in. It’s pretty honest music. Honestly, everyone feels a great range of emotions, like awkwardness and self-doubt, and not wanting to have to be cool to be cool. And that’s what these songs are like.”

The video for the new single ‘Jungle’ sees the band transmogrified into my mind’s eye view of how they sound. They are all bent up and bruised and look a little like they’ve been dipped in a boggy lagoon. Perfect for their gloriously gritty pop and you can see it here in all its gory beauty…. Ganglians are our new favourite band.

The new album ‘Still Living’ is out on August 29th 2011 on Souterrain Transmissions. See www.facebook.com/ganglians 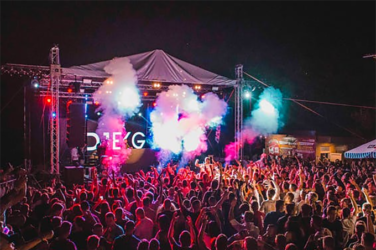