Like contemporaries Twerps and Sea Lions, Golden Grrrls have joined a line up of bands who refuse to sacrifice melody for mere primitivism. With all three members singing throughout, there is warmth in every song, adding to the poignant punch of the album as a whole.

‘Take Your Time’ is a punked-up indie pop gem, and the video has been released this week as a wash of live action and graphics, funfair horses and running men.

What began for the trio of Eilidh Rodgers, Ruari MacLean and Rachel Aggs as bedroom guitar experimentation has bloomed in to a fully-formed language inspired by the 80s New Zealand and Australian indie pop scene and DIY punk.

The debut album ‘Golden Grrrls’ is out now on Night School Records. Golden Grrrls are also touring the US as we speak with dates coming up in March and April in San Francisco, Los Angeles, San Diego, Boston, Brooklyn, Philidelphia, Baltimore and New York. For more see goldengrrrls.bandcamp.com.

Nathan James and his Circus of Creeps: Perverts, John Wayne and Mickey Mouse 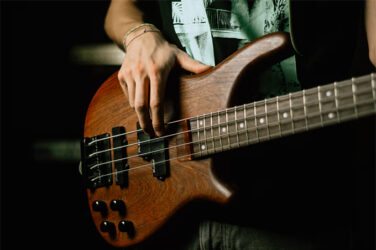 Improve Your Bass Guitar Playing Skills With These Expert Tips

words Al Woods A bass guitar is a weapon of mass destruction in the ...