In the deepest, darkest, shadiest corner of pop is the world of painter Nathan James.

This is a world like no other: a world in which you can expect to be offered pills by a tripped out Mickey Mouse, in which you can expect to meet perverts, groping, freaks and repulsiveness; this is a place where an unrecognisable John Wayne lurks, his eyelids, nose and lips hanging like putty over his co-star’s face, a place where eyeless faces stretch and contort in tangled kisses, drooping and staring blankly at each other through flaps of bubblegum-coloured skin… 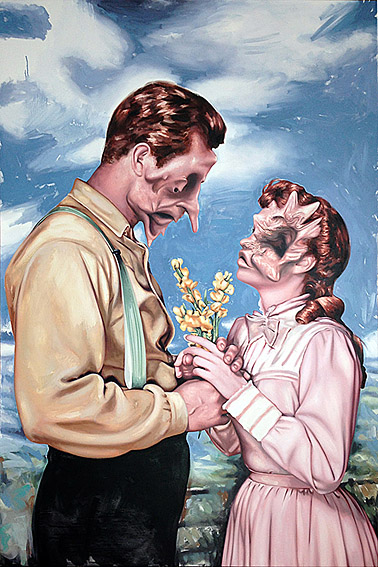 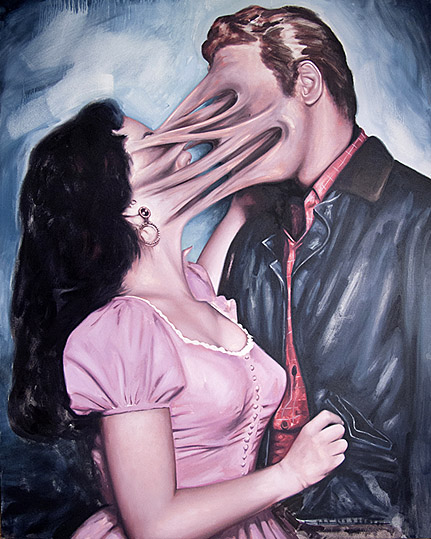 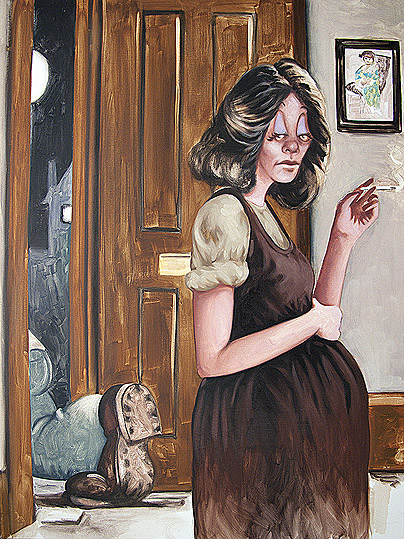 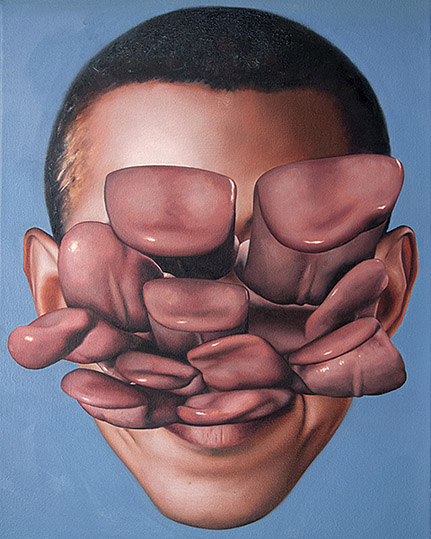 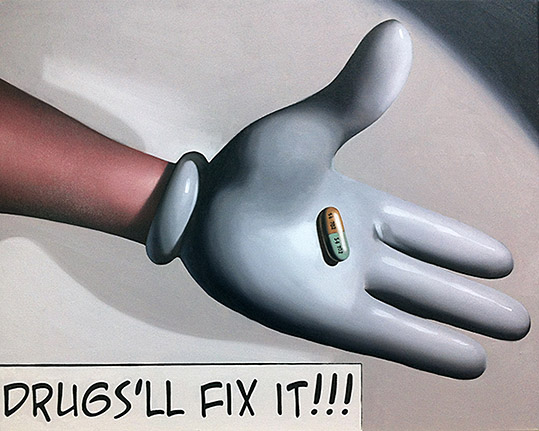 John, Mickey, their repellent co-stars and their underworld home are the protagonists and the setting of Creepshow, Nathan James upcoming pop-up exhibition of his most recent work in which pessimistic pop takes a knife to 50s movie poster art and reveals the ugliness and decay beneath the skin of celebrity. I chatted with Nathan to find out more about the dark themes and characters of Creepshow, his pop-up aesthetic and his opinions on money and celebrity.

“I think it’s about trying to look at what’s really going on…” says Nathan James, talking about a painting where Mickey Mouse exclaims “Drugs’ll Fix It!” whilst handing out a pill. “I’m interested in the stripped down underbelly of our culture. Like it’s closing-time at a sleazy nightclub; all the lights have come on and you’re forced to take a stark look at what you’ve been dancing with all night… a pharmaceutical advertisement broken down to its barest essentials. A spot lit, trusted hand holds out a magic pill that will wipe away whatever ails you. It promises a pharmaceutical solution to spiritual problems…”

Nathan’s work has changed a lot in the past couple of years. His earlier works were photo-realist paintings of collage-like pop images, bursting with pinks, lips and gloss. Now, however, colours are dimmer and the style is more painterly, expressive and aggressive. I ask whether he thinks his work is pessimistic and depressing and he laughs, saying jokingly, “Ha! Yes. I’ve tried to imagine the type of work that Eeyore would make and done that…!” He continues, “I think my new stuff is more personal. It deals more with themes of death, disappointment, co-dependence, jealousy… lots of the experiences that shape us as individuals. I thought it would be interesting to externalise the psychological trauma of the “sitter” onto their physiology. And 50s movie posters were perfect. They tap into that nostalgia for a lost golden age which, when turned on its head, adds another layer of subversion.’

Continuing on the topic of the shift in his artwork, we discuss the impact that economy and politics have had on his work. “The world has changed so much since 2008. I think it would have been weird if I just carried on making the same slick, glossy, pop-paintings of young, pretty ladies as if nothing had happened. For me, it became sort of an “uh-oh, party’s over” type moment and I began to wonder what the hangover would look like. Maybe this is my “walk of shame” phase?’ Nathan’s images literally turn inside out the celebrity pop of his previous work; what usually lies beneath skin is, in Creepshow, revealed and exposed. The crumbling economy has wounded the image of wealth.

“I think getting too wrapped up in money and fame must be corrosive to the process of creating anything real.” I ask him about his own relationship with money and work and he says: “Realistically, we’ve all got bills to pay and I would never begrudge any artist their success. But if that becomes your focus, it’s a creative dead end… I, personally, treat it like a normal job and work standard 8-6 type hours. Like most people, I try my best to provide for my family. But mostly, I just try to make honest work and not worry too much about what’s sold where or to whom.”

Our conversation moves onto the pop-up aesthetic he is adopting for Creepshow. “A few of the galleries I was working with had trouble imagining what the show of this work would be like. And fair enough – they signed on for one thing and, when it changed, they didn’t understand it. I think the artist-gallery paradigm has shifted so much from what it was a few generations ago. Artists now have to make things happen for themselves. I think the Internet has changed culture. It’s enabled people to their own platform without having to rely on elite approval. If what you have to say is interesting then it’s a lot easier to find an audience than it was 20 years ago. People are doing it for themselves. I love it!”

“There is a lot more freedom doing a pop-up show,” he continues. “I don’t have a lot of experience with galleries trying to direct my work in terms of sales but, recently, I did have one gallerist cancel what would have been an interesting group-show because there were no presales. I think that attempting to make work to appeal to a certain market is creative suicide. We’ve all got stories to tell. If you want to make something interesting, the most important thing to do is tap into that and explain it to people in a way that they can relate to. Great art takes the personal and makes it universal. It helps us understand the world we live in. If our world is shallow, money-oriented and celebrity-driven, then perhaps that is the type of art that will emerge from it.” But for now, in a world where money, wealth and fame seem broken, Nathan’s creeps seem most pertinently fitting – a suitably sinister result of a dark time.

Creepshow by Nathan James is on from 20 March to 7 April. Follow @NathanDJames and check www.ndjames.com for more information.

Youthful dystopia is a subject revered in music and film. From pontificating punks to ...

Awards for emerging artists; they’re hardly everywhere but they are certainly an established phenomenon. ...