I usually don’t respond to personal requests from bands, but this case seemed different. These guys had all been born on different worlds and after one environmental catastrophe or aggressive act they had had to abandon their home planet. They all ended up here on Earth, in Manchester to be precise.

As a way to make money and survive in our cutthroat world they decided to form a band. It made sense in such a musical city. This way they could feed and clothe themselves and also entertain us earthlings.

So I headed to the venue admittedly with some trepidation. I had never met alien lifeforms before and wasn’t sure of the culture I’d encounter or the etiquette required.

What to say about Henge? Well I was intrigued by what I’d heard. It was promising to see the place packed. There was a certain anticipation in the air. Many of these people had been before. Others must have caught on by word of mouth or personally invited as had I been.

A certain worry in my mind. Bands that are just built around a witty concept often tend to collapse under the weight of their own hilarity. I clamped firmly down my nagging doubts.

I had no reason to doubt though as Henge are quite brilliant. They really get into the stories they’ve woven around themselves. Yes they dress up but they play it all straight. They are not joking. They really are from planets beyond our solar system. The singer is more like a lead spokesman for the band of aliens. He does join in and even wield a demon axe sometimes. He looks a bit ancient interplanetary druid to me but has a glass orb on his head. The music is apparently programmed from the brainwaves inside this orb.

Yes we know it’s not real but we choose to believe. They are really good musically. If they weren’t then the whole edifice would collapse. It’s very infectious and quite dance-able too. They are the leader -backed with live drums and two brilliant aliens twiddling away on laptops and keyboards – different kinds of alien though. They’re are not from the same planet remember. Some alien ladies dressed as mushrooms came on as backing dancers during the set which was a lovely reference to how we should value our natural planet (or so I think).

They are here to entertain us humans. We humans thank them for it. We laughed, we danced, we felt part of something. We felt transported. 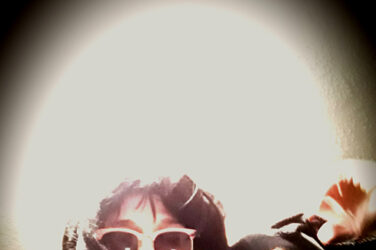