Our regular arts writer Philomena Epps decided to check out some key art shows whilst on a trip to Japan. Here’s the fourth of her reports on the 70’s in Japan show at the Hiroshima City Museum of Contemporary Art.

This retrospective of the artistic movements in Japan in the 1970’s documents a wide diversity of mediums, ranging from graphic design, architecture and photography to fine art and publishing.

The exhibition explores the decade as an exciting era for art and radicalism, a time rocked by student activism, the Expo ’70 riots and a break with authoritarian beliefs and tradition.

Distinctive, avant-garde books and magazines such as Film Quarterly and The Design Review iterate how groups of designers, photographers and writers began to work in unison. Focused magazines on youth culture or women’s pursuits were also published, such as Popeye and An-an. Fascinating breaks in architecture and interiors, such as the documentary film on Kisho Kurokawa’s Nagakin Capsule Tower which was located in Shimbashi, Tokyo, demonstrate the cultural shift in lifestyle and attitudes to housing.

The exhibition is dense, spanning half the museum’s exhibiting space, and aesthetically beautiful. The common themes of the posters, vinyl sleeves and magazine covers play with scale, colour, collage and type. The contrast between and the re-working of traditional imagery and values during the 1970’s are explored in great depth, focusing on a generation in flux and revolt. 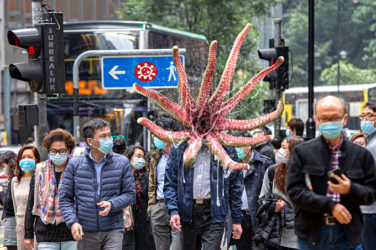 words Eve Upton-Clark At a time where a government-mandated lockdown is in place, working ...

I cling to bare branches of trees as I clamber around the edge of ...