If modernism died for our sins, postmodernism made a new religion out of them. Back in 1949, An Exhibition for Modern Living showcased the pared down designs of the future in the booming city of Detroit. These were objects forged from pure optimism, their ergonomic edges guiding us through a conveyer-belt world of convenience.

Sixty years later, Detroit is dead and artist Matthew Darbyshire solo exhibition of the same name presents us with modernism’s mutant progeny, the de-formed following dys-function in an aesthetic of abject pessimism. 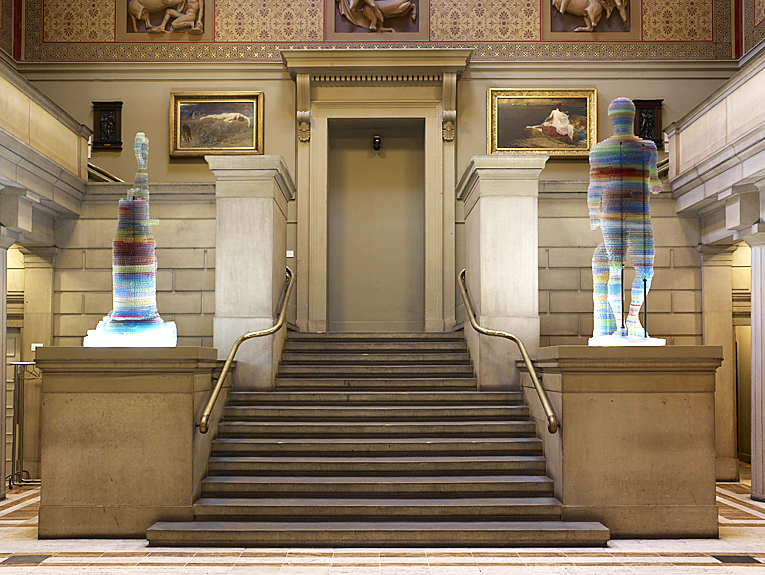 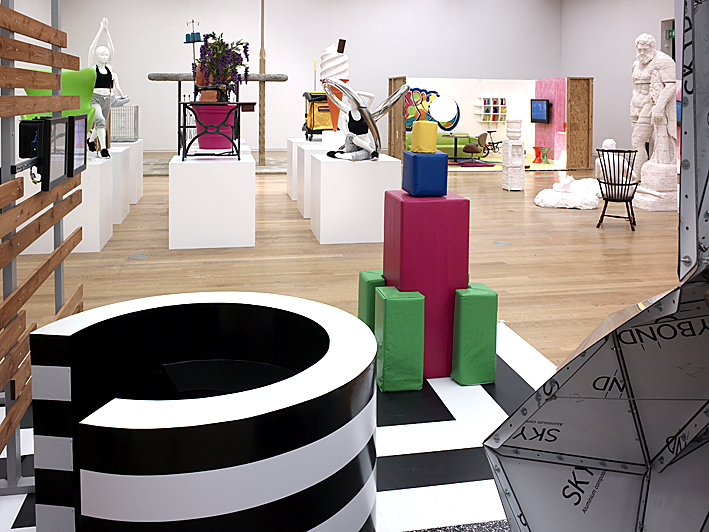 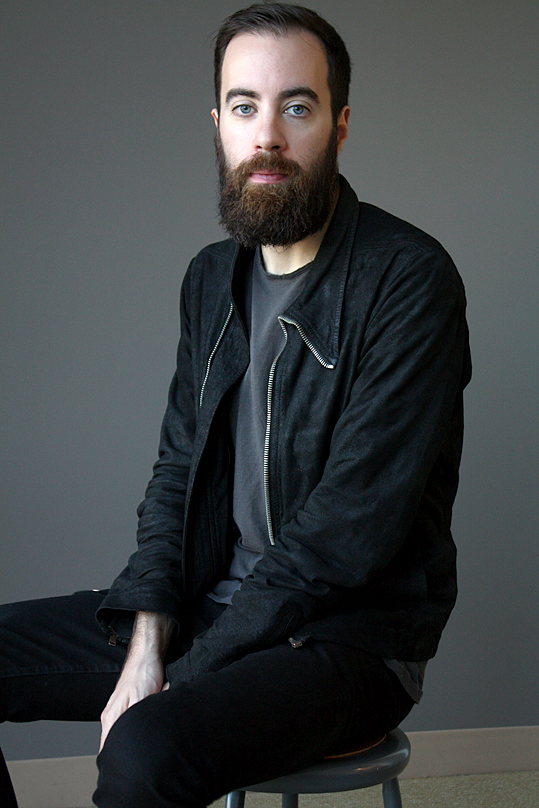 Where did we go wrong? It’s as if modernism’s phonetic utopia has been fed into Google Translate and an unpronounceable dystopia has popped out the other end. Hope, it seems, has been lost in the process. But has anything been gained? Could postmodernism’s funky, self-referential surfaces be just as beautiful, just as benevolent? This years’ Manchester Literary Festival sees novelist Ned Beauman asking just that, performing a specially commissioned response to Darbyshire’s exhibition that he’s called An Oral History of the Nov Lik and its Legacy. It’s a fabricated backstory for the kind of contemporary design we love to hate, and precisely the type of mischief we’ve come to expect from Beauman’s books. To up the ante, the artist and author won’t even have met until the day of the performance. Like all blind dates, it’s anyone’s guess how this will end up.

I spoke to Matthew Darbyshire as he made the final tweaks to An Exhibition for Modern Living, a show that fills the second floor of Manchester Art Gallery, comprised of an installation for every year in a decade of practice. “I haven’t ever seen two in the same room at once,” he tells me in a slightly dazed voice, sweeping his hand over the supersized sculptures, “it was an opportunity to take stock and think where to go after this.” But is it a retrospective? “I’ve been thinking of it as a survey,” he counters, “It hasn’t got the ego of a retrospective!” While he freely admits it’s “massively indulgent”, his intention is to encourage debate not to educate: “I’ve sweated blood over this stuff and almost bankrupted myself emotionally and financially, so I’m up for sharing it and seeing what we can decipher from it.”

Modernism’s utopia has been interpreted as a shiny sameness the world over. “It’s all magenta!” Matthew Darbyshire declares, his installations re-presenting the kind of surfaces we see everywhere, their veneers reflecting judgment onto the viewer. Which is probably why I feel like playing devil’s advocate. “But isn’t it just good design,” I ask Matthew earnestly, trying to keep a straight face, “You know, postmodernism is ubiquitous because people like it and it works?” Darbyshire blinks but keeps his composure. “The design is obviously good otherwise it wouldn’t have gone through all these permutations to get here,” he thinks aloud, “but I think a lot is lost on the way when you start flocking them and wrapping them and suffocating them in vinyl.” I suggest this process is an analogy for the way corporations layer meaning onto objects. “I definitely think of these things as coatings,” he agrees, “I’ve thought of it as masking, veneering, veiling – most of the new architecture goes up a framework panelled in laminates and veneers, masking what’s otherwise a flimsy synthetic skeleton to look like some of the other periods you might see.” Every city has them, modernist buildings where the ‘post-‘ prefix has been literally added on as what Darbyshire delights in calling “sexy pink frontage or an aqua turquoise tinted balcony.” The end result is identical urban spaces drizzled with these ‘decorated sheds’, referencing the optimism of modernism but whose air quotes only serve to undermine it.

“Taste is the bait and class is the snare,” Ned Beauman memorably declared in his Frieze review of Darbyshire’s 2002 show, also called An Exhibition for Modern Living. This was Beauman thinking aloud about Darbyshire’s thinking aloud, a piece that decried modernism’s ‘dismal optimism’ while condemning his own ‘elitist pessimism’. An installation of commercial design that could be read as either its celebration or humiliation, this was a show that asked uncomfortable questions; it just so happened that squeaky bums was Beauman’s speciality too, his novels making an art out of aesthetic anxiety.

Like all good fiction, Beauman’s work hinges on WTF moments that disorient readers with juxtapositions. Take the scene in latest novel Glow, where protagonist Raf boards a London nightbus to find a fox sat anthropomorphically on the upper deck. Or the opening line of his debut, Boxer, Beetle: “In idle moments, I sometimes like to close my eyes and imagine Joseph Goebbels’ forty-third birthday party.” It’s something that both Darbyshire and I experienced with Beauman’s brand new MLF piece too. “It sent me into a spin on the first read, “ Matthew confesses, “a bit like when you said ‘Is it just good design?’ – You’re momentarily stumped and ten minutes later, you start feeling really angry and ‘What the fuck! Of course it’s not that simple!’” In his Frieze piece, Beauman had called Darbyshire “a more devilish Pierre Bourdieu”; I think the feeling’s mutual.

Unlike Beauman’s Frieze review, this MLF commission isn’t about Darbyshire’s art, it’s a sort of equivalent to it, a translation of the visual subtleties into a verbal assault. Ned’s piece explains the origin myth of Nov Lik, an imagined contemporary of Bauhaus, responsible for what Darbyshire calls “these millennial tendencies that I’ve picked up on; colour schemes and materials and organic biomorphic forms that we think are so tasteful and modern.” It’s a different take on the concept of ‘Equivalence’ from Beauman’s 2012 novel The Teleportation Accident, the sobering realisation that nothing really changes from age to age. “It’s not necessarily pessimistic,” Beauman tells me over the phone, “because it is saying these ‘Golden Ages’ that we imagine probably weren’t as good as we think; but it’s also saying that our current moment probably isn’t as inferior as we think it is.” He goes one further with his new piece, which features an imp called nasledstvoto kradets, intent on destroying people’s legacies, thereby undermining the value of everything.

It’s a comforting thought for us FOMO (Fear Of Missing Out) sufferers out there, and it also suggests that if earnestness can be wielded like a weapon, it can also be turned on its users. Beauman characterises his MLF piece as a “critique of the critique” of postmodernism, a meta-meta-analysis designed for peak friendly fire effect: “The story is asking how we would feel differently about it if this style had a backstory that was just as eligible for admiration and superiority as straightforward modernism?” It’s a question that backs us onto the spikes of our own likes: “Would we still dislike it, in which case, we have to revise our criticisms? Or would we start to like it more, in which case we’d have to admit that many of our criticisms are more about defending an elitist position than they are about the work itself?”

Postmodernism’s poor translation of the messages of modernism is due in part to its amplification, its global reach. In Glow, the illegal drugs trade is described as ‘the first globalisation of the emotional life’. I suggest that literature’s power lies in its opposite effect; each reader experiences a text uniquely. Beauman agrees, but warns of a worrying trend in non-English literature to write in a ‘deracinated’, ‘bland’ prose “to make sure that not too much would be lost in translation.” It’s the same thing that has been happening to art for decades, a global gallery system with a multinational house style.

Ultimately, while hipsters and Trust Fund kids make a big play of being artisan and off-grid, both Beauman and Darbyshire craft a way of opting-in that feels far more radical. “This is me not going to live in a hut in Margate, and this is me trying to remain present but not completely give in and comply,” Darbyshire tells me, surrounded by his hand-crafted translations of mass production techniques. A survivor of Bourriaud’s 2009 Altermodern show at the Tate, he’s sailed free of umpteen iterations of the after-modern. Meanwhile, Beauman has been researching 1950s Cuba for his next novel; although “an incredibly good Googler”, he admits he’s happy to make stuff up in the absence of facts. He’s also enjoying the freedom of short fiction, though admits “the kind of stories I write are never going to win a prize – I imagine the ones they tend to reward are not the ones where the author has attempted to run some kind of weird experiment!”

Beauman has clearly responded to Darbyshire’s bait by laying yet another trap. Like the legacy-destroying imp from this fake oral history, Beauman’s fiction pulls down the twin pillars of taste – provenance and permanence – and dances in their dust. These deliberate mistranslations, from art into fiction and the past into the future, reveal truth to be an unfolding fiction, one we can all collaborate on. 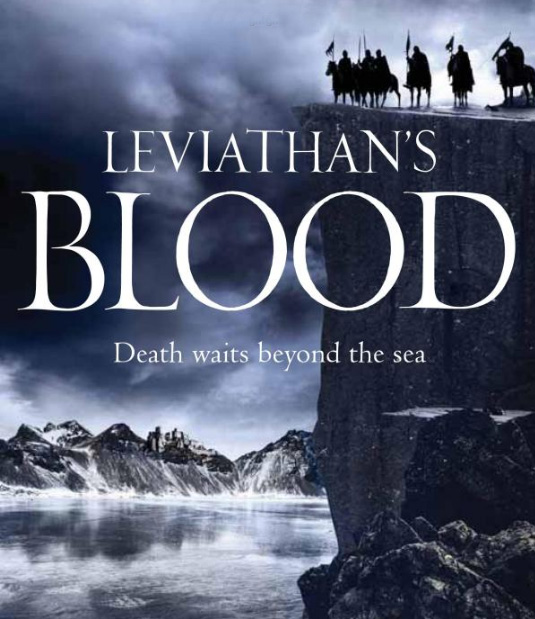 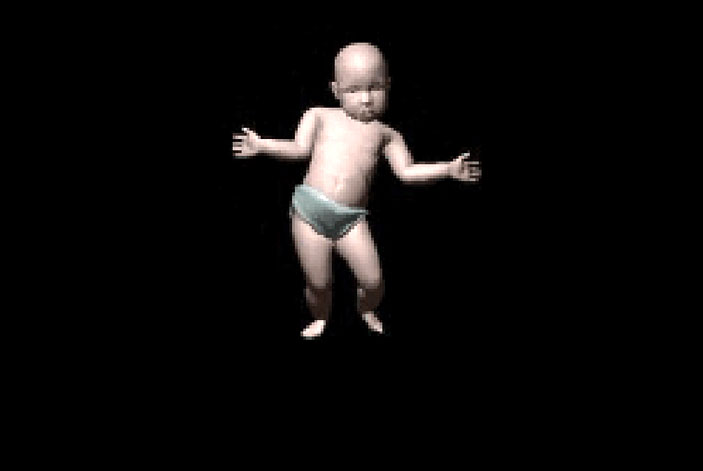