A golden age has unfolded here in the UK for foreign language television drama and as with any such prosperous time it seems never-ending.

Closer to home Welsh crime drama Hinterland has been the recipient of a cold shoulder, demonstrated by the BBC’s airing of the bilingual version outside of their Saturday evening prime time slot on BBC Four. For dramatic purposes this translates to a dismissal of the Welsh language in light of the acceptance the Nordic, French and Italian languages have found. 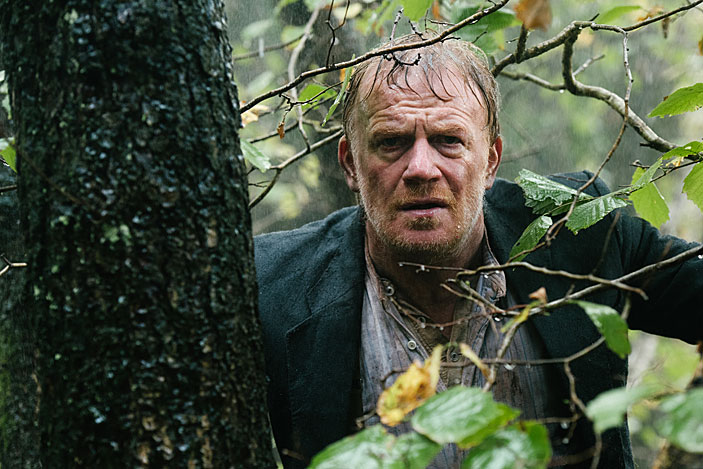 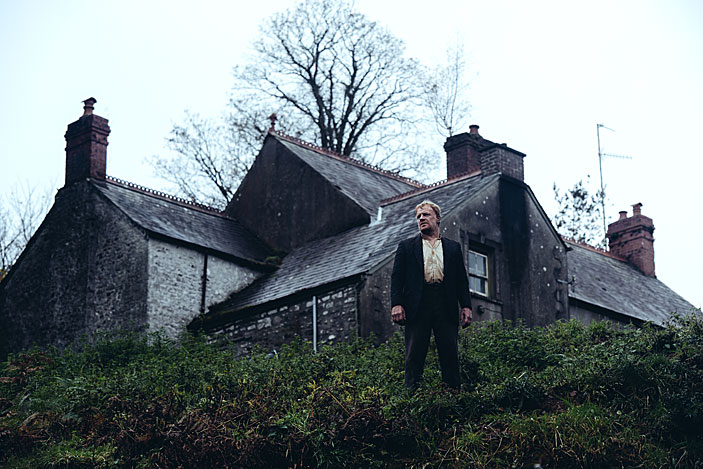 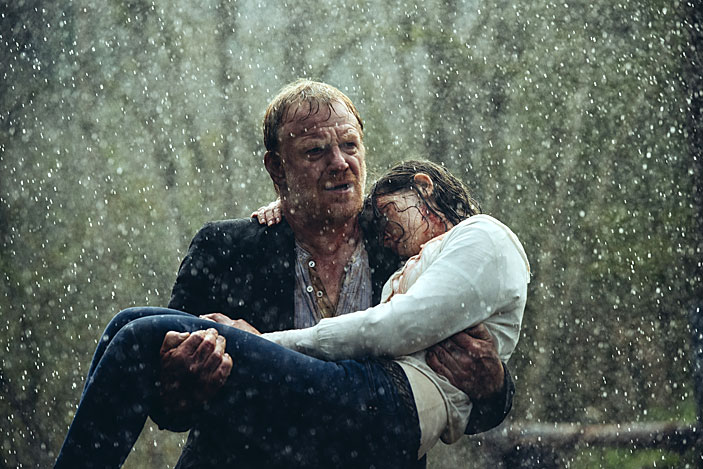 From Hinterland director Gareth Bryn and creator Ed Talfan comes The Passing, a brooding all Welsh language drama set in the Valleys. When Sara (Annes Elwy) and Iwan’s (Dyfan Dwyfor) car crashes into a river, Sara is rescued by the reclusive Stanley (Mark Lewis Jones), who gives the couple shelter at his nearby farm house. But this gesture of kindness; this intrusion upon his isolated world is set to threaten his peaceful and ordered existence.

The American academic and critic Christopher Sharrett – the conscience of serious film criticism – wrote in his obituary of critic Robin Wood: “…One needs to remain flexible to accommodate the critic’s constant réévaluation, recognizing that criticism involves an ongoing dialogue with both a work and one’s view of the world. The idea of the critic not having a formed opinion, rather our opinion constantly evolving an understanding of an individual film.” (Sharrett 2010: 12). Bryn has described the film has being: “Slightly untraditional in its structure” while further admitting: “The film is not an easy watch and we know that.” True to the nature of the slow burn sensibility, The Passing requires the generous patience of its audience that in return expect the reciprocation of a rewarding journey. On a first viewing Bryn’s assessment is fair, yet by forming a flexible opinion and upon revisiting the film familiarity allows one to uncover a film that contradicts its director’s admittance. This speaks to the influence of familiarity on the spectatorial experience and the way in which we digest stories. Sharrett’s words on the responsibility of the critic to remain flexible is therefore of grave importance and these words should also be adhered to by an audience. This observation is raised only because it offers an insight into the intricacies of experience and the perceived truths of a work from the point of view of its creators. Any review, critical appraisal or spectatorial experience is merely an incomplete understanding – a fragment of that singular moment in time. This poses a quandary to the critical establishment, but more broadly raises the question of whether cinema is more greatly misunderstood than understood as a consequence of the foibles of reactionary first impressions.

The Passing is structured around dramatic expectations, but as with any well executed drama the path the journey will take is an uncertain one. Any good storyteller understands that it is never not about where you end up, but how you get there. What route will Bryn and Talfan take to reach the conclusion? Will the focus be on Stanley’s defence of his homestead or will it be a cunning and cruel manipulation that sees him displaced? Or is there something more at play here? The expectation of the film’s propensity for violence through the positioning of Stanley and Iwan’s archetypal characters echoes the western film, which was predominantly built around such narrative expectation. But it is the means by which the character embraces violence that remains an important nuance because the moment of surrender contributes a wealth of understanding to the character, and none more so than in a tale such as The Passing that places as much emphasis on the emotional as it does on the physical. Yet the power of storytelling is to momentarily cease thinking along narrative lines to instead tap into themes that conjure up considered contemplations. And Talfan’s script features an effective observation of youth versus age, specifically of the possessive nature of youth to deal in extremes in which the emotional and physical are inseparable. But running deeper is the impression that social upbringing, our psychology and opportunity for experience shapes our sensibilities in intricate ways that casts age as a potential oversimplification.

With a steady control of the claustrophobic and the evolving relationship between its three leads, Bryn and Talfan toy intriguingly with sense versus actuality. While there is opportunity for Iwan and Sara to escape the gaze of Stanley that would seemingly counteract the supposition of claustrophobia, it does not, as it also derives from the emotional. As Iwan discovers through a futile attempt to reconnect with the outside world, the house is the centre stage of the drama, upon which a triangular relationship is destined to play out. The emotional intertwinement of the characters, the less than roomy inner confines of the house, the intimate bordering of past and present creates a claustrophobic tale structured upon the emotional, sensory and spatial. But it is one finely judged with moments of subtlety that are offset by crescendos of intensity.

The identity of The Passing is one deeply ingrained in the Welsh language, and the refusal of the bilingual route infers the respect Bryn and Talfan have for the inherent role language plays in forging a story’s sense of identity and feeling. One should never be to hasty to forget the importance of art in allowing language to find expression and exposure. The Welsh language is a rich one full of character that brings the words, emotions and the aestheticism of the film alive, but may equally be an agent of its demise. If there are tragic overtones to The Passing, then the most heartbreaking tragedy would its gathering dust in the shadows of a limited theatrical release, whereby it will be fated to exist only in the memories of those too few privileged to see it.

The Passing was released theatrically in the UK on Friday 8th April 2016 by Severn Screen.

The release of The Wicker Man- The Final Cut is the conclusion of director ...