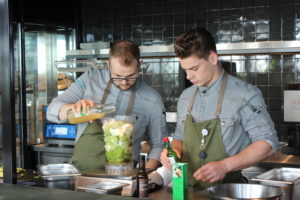 ‘Taste this. Champagne leaf. An anaesthetic. From the Amazon. Great for cocktails. Our sous chef makes sweets from it’

I’m not in a restaurant, nor a cafe: I’m standing on the roof of the 21-storey QO Hotel, in a self-sufficient, self-sustaining greenhouse. Amsterdam’s skyline surrounds us.

Mathijas, the gardener, hands me a jagged little leaf. A burst of tingling later, and my mouth is feeling both numb and fresh. I’ve not tasted anything quite like it.

Since opening in April 2018, the QO Hotel has won hearts, minds, and awards for its commitment to sustainable design. This greenhouse, for example, supplies the restaurant – while being almost fully self-sufficient. 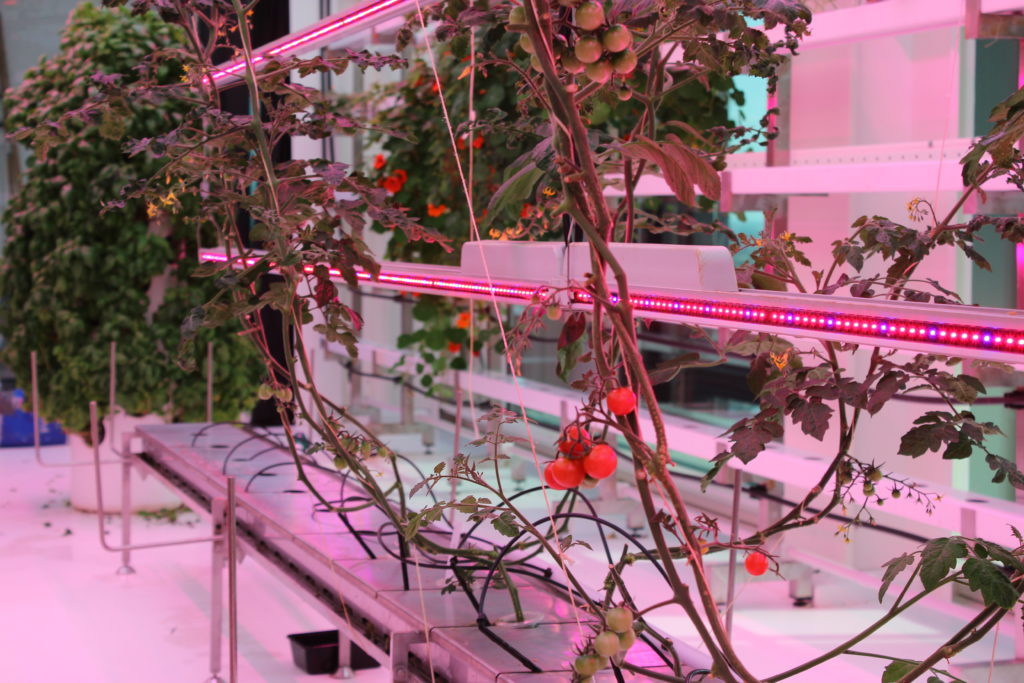 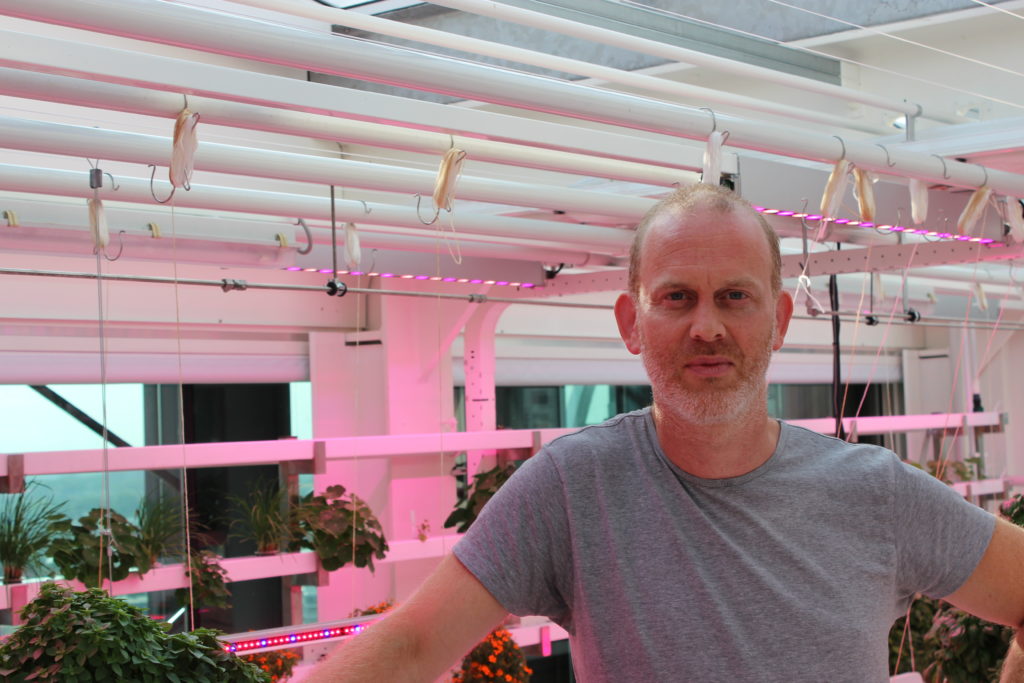 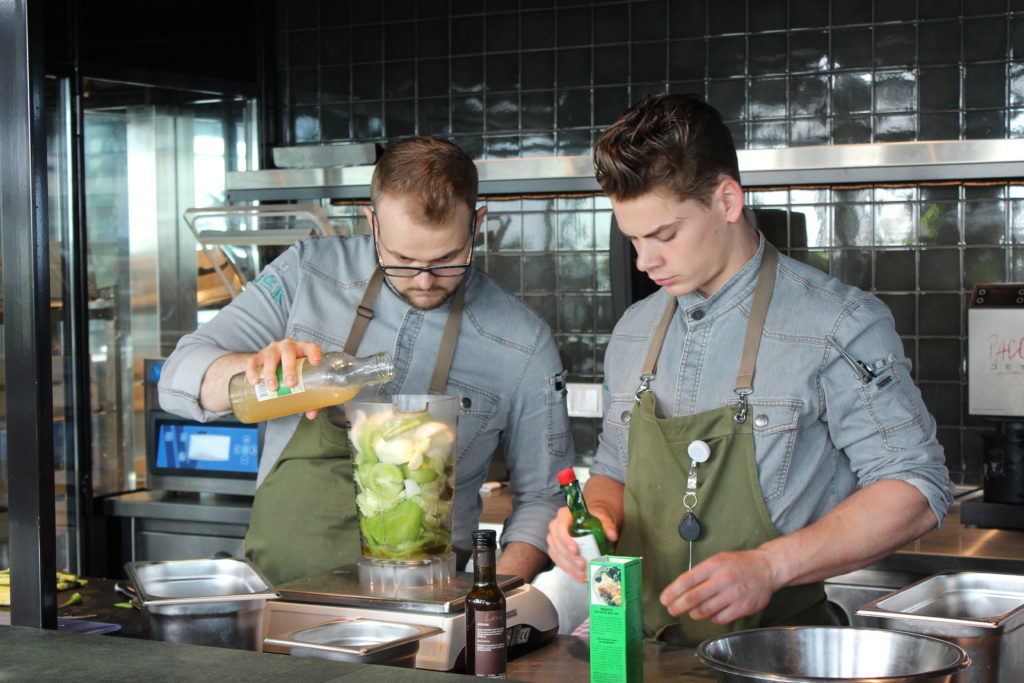 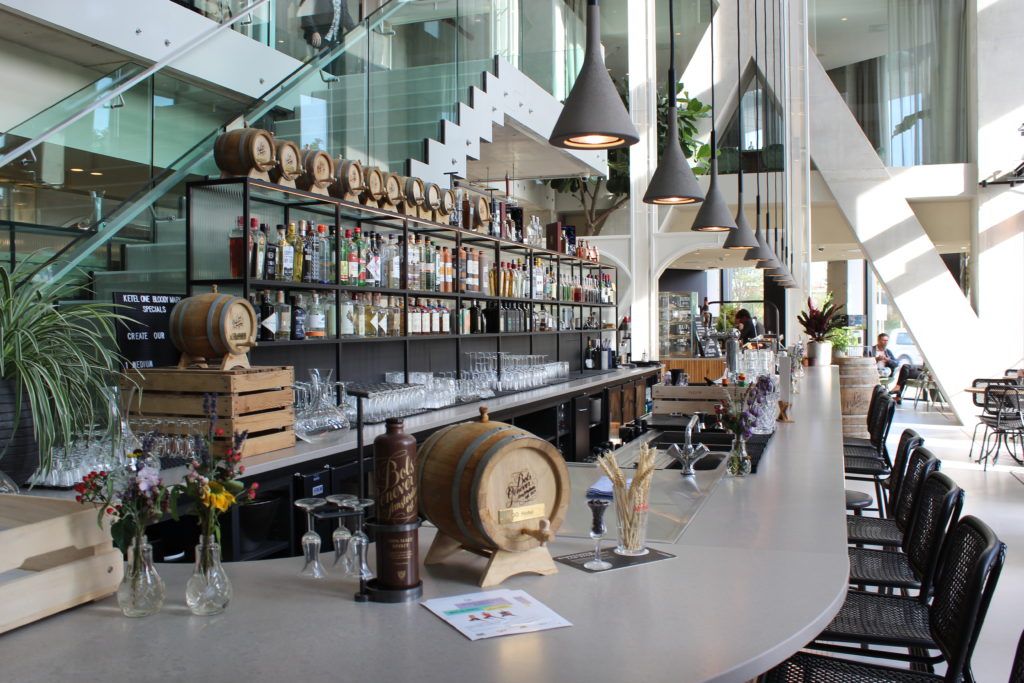 ‘All the technology you can see here’ says Mathijas, gesturing to the rows of LED lights, specialised jets, pumps and screens, ‘was designed specifically for this greenhouse. We told the agriculturalist who helped us design it that we wanted to grow about 30 different plants up here. He looked at us as if we were mad’

The ethos of the greenhouse flows right through the hotel. Instead of air conditioning, QO’s facade uses aluminium panels to control the climate of the rooms. Floor-to-ceiling windows and an atrium mean that most of the lighting comes from natural sources, reducing electricity.

‘We don’t want to preach’ says Marlon, the hotel’s marketing manager. ‘It’s not about shoving it down people’s throats. You could stay at QO and not really notice our sustainable efforts, and just enjoy the luxury. But we do want to spread the message’

Long associated with hedonism, Amsterdam is fast becoming one of the world’s leading centres of green technology and design. The city is now connected to Eurostar’s rail network, meaning that you can travel to Amsterdam from the UK without a big carbon footprint.

‘It’s not easy’ Marlon admits, ‘But we believe that this generation is different. They want comfort, they want style, but they don’t want to compromise their principles’

A stroll through the hotel’s gorgeous lobby shows off QO’s grandeur: splashes of gold on marble, plush pastel-coloured lounge chairs and checkerboard tiling all speak of luxury.

‘A lot of the sustainability elements you don’t see, because they’re built into the design’ Marlon explains. ‘The water from the sink and the bath is recycled and used for the toilet. But we also channel it through the concrete ceilings into an underground tank’

Buried 70 metres underground, the hotel’s innovative heating system uses heated water from the summer, which is pumped back into the hotel during the winter.

‘Before we do anything, we ask ourselves: is this really sustainable?

It’s laudable, but it also sounds like a difficult way to run a hotel with almost 300 rooms. Do the demands for environmentally-friendly design harm the hotel’s function?

‘Of course there are challenges. We serve an a la carte menu for breakfast. Some business people ask, ‘Where’s the buffet? I’m in a hurry’. But buffets have a lot of waste, and we want to avoid that. So we have to be creative’

Creativity is certainly on show at Persijn, QO’s restaurant. Here on the ground floor, the zesty produce of the greenhouse is transformed into colourful bursts of flavour. A blanched tomato, glowing red, sits in a lime-green pool of basil oil. Press a fork into its skin, and ribbons of mozzarella tumble out. A fillet of plaice is partnered by parsnip cream, endive and parsley oil.

Best of all are the desserts. There’s an apple. It’s been poached in its own juice and anise, filled with almond paste and perched atop a bed of crumble.

There’s also a chocolate coin: a round coffee-coloured slab, enlivened with seven spices and a layer of caramel. 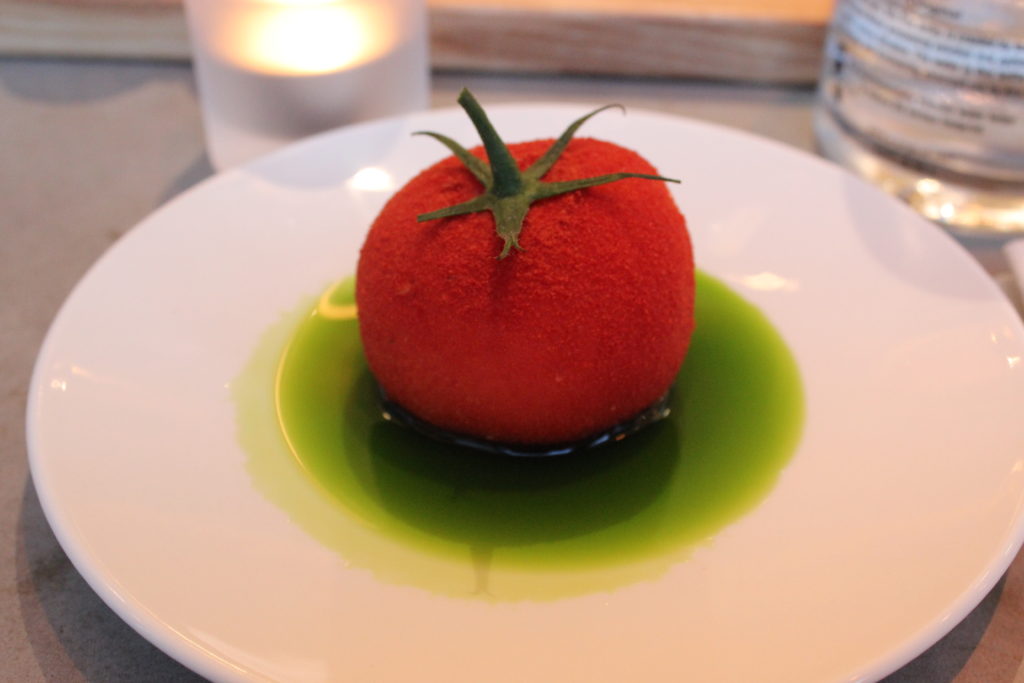 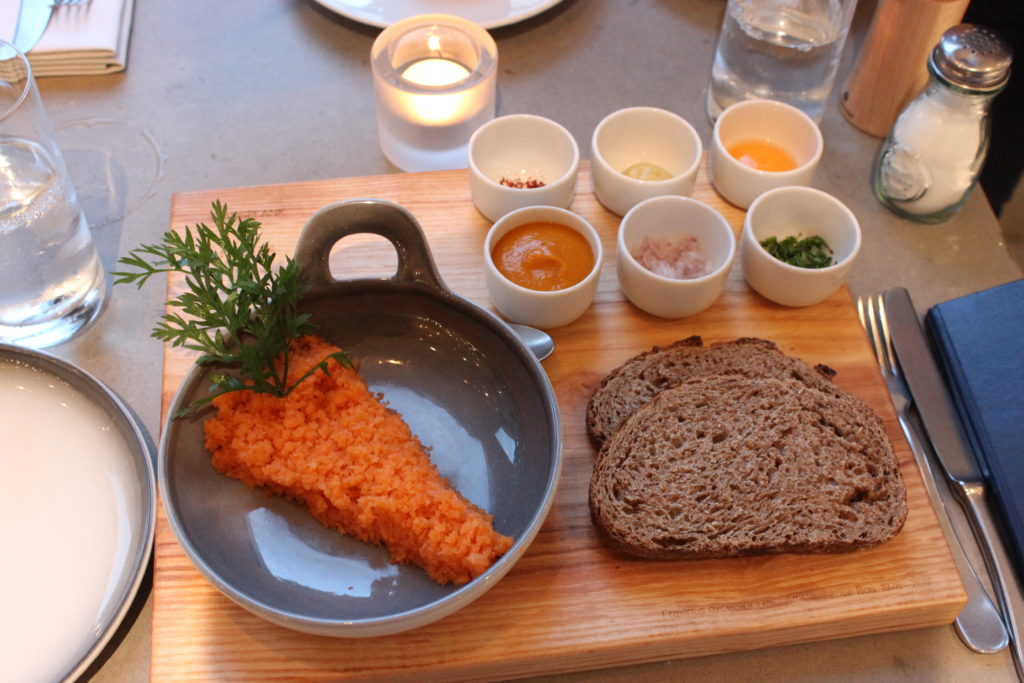 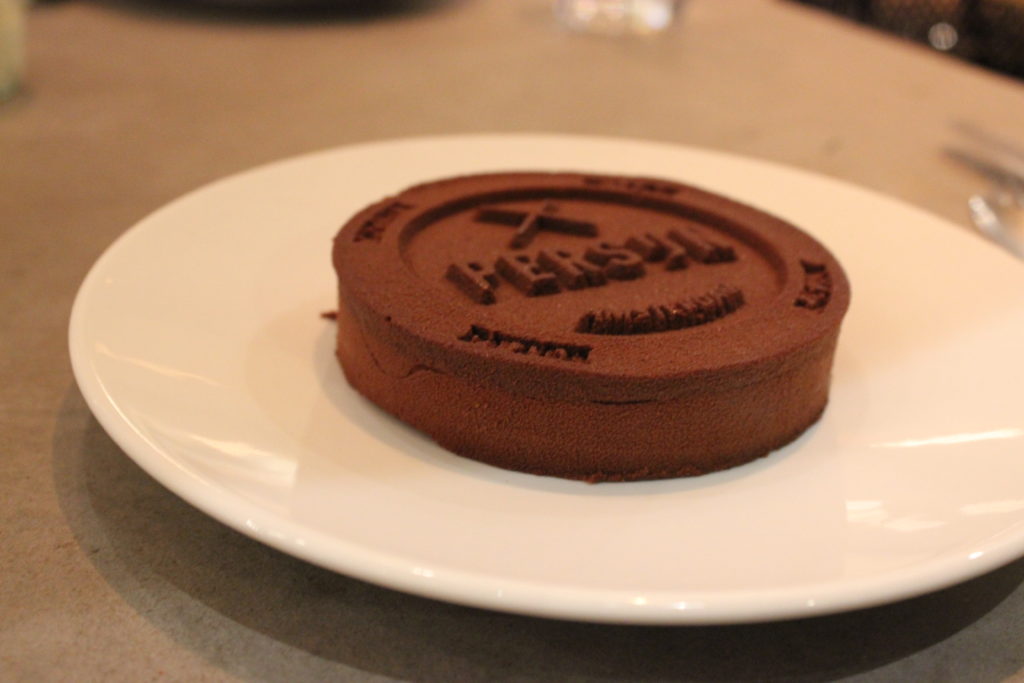 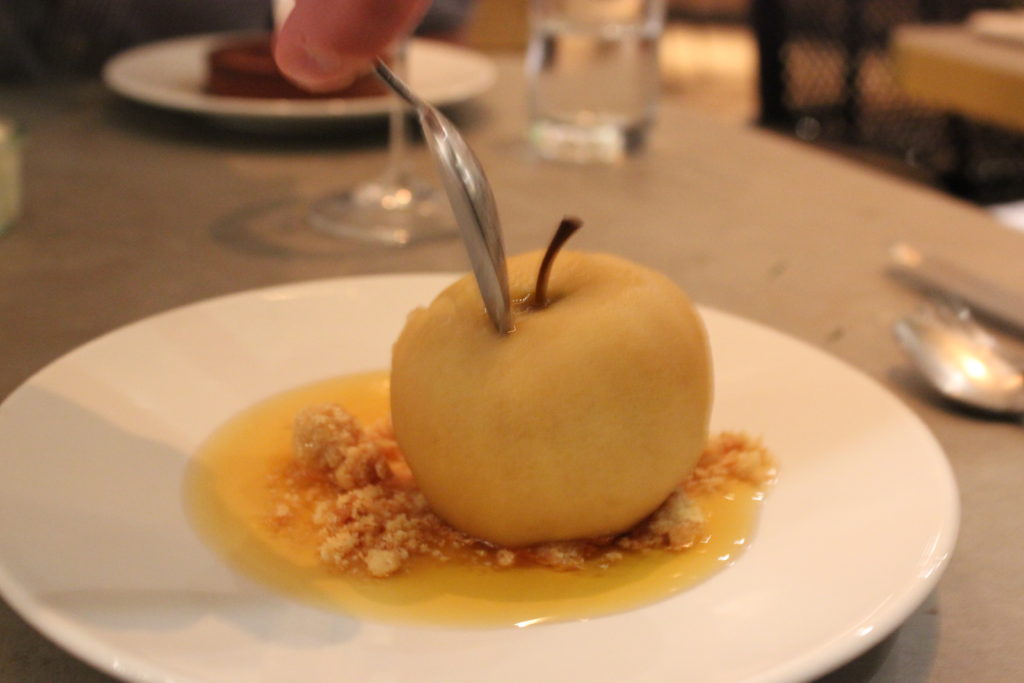 Persijn is one of those rare restaurants which unites artistic experimentation with sustainability, all while making it impossible not to clear your plate. But they’re not the only innovators in town. Over in the east, near Oostpark, we visit InStock, a restaurant determined to eliminate food waste.

‘It started low-key. We went to the supermarket ourselves, on our bicycles, and just asked them for the produce they hadn’t sold’ says Jill, InStock’s marketing manager.

She pauses for a moment. ‘You almost don’t want them to know, so you can see their surprise when you tell them’

Last year, InStock founded the Food Rescue Centre, a food sorting plant for produce that would otherwise be thrown away. Other restaurants have begun sourcing food from it.

‘If it helps more food get onto a plate rather than the landfill, then great!’ Jill says.

For all its credentials, InStock isn’t po-faced. Tonight’s seasonal menu is inspired by Russian cuisine. Why? Because Vince, the chef, is dating a Russian girl right now, and it’s probably a good way of winning over the in-laws.

Not that they don’t take their food seriously. Aubergine mousse is accompanied by a silky red pepper coulis and shaved egg yolk. That’s shaved egg yolk: InStock’s chefs cure and cook it at a low temperature, resulting in egg with the consistency of parmesan. Dried ricotta is made using the leftover coffee foam from InStock’s cafe.

Russian salad has long been a dish I avoid, but here it’s a total joy: a carnivalesque column of pickled cucumber, fried capers, fermented tomatoes and dill, with splashes of creme fraiche ice cream. 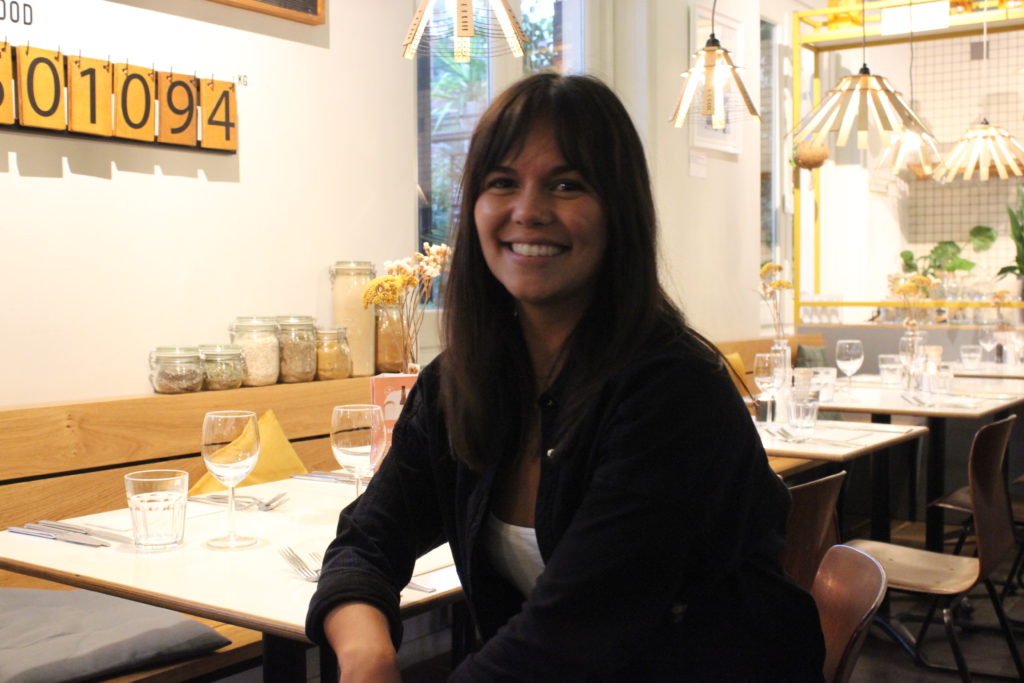 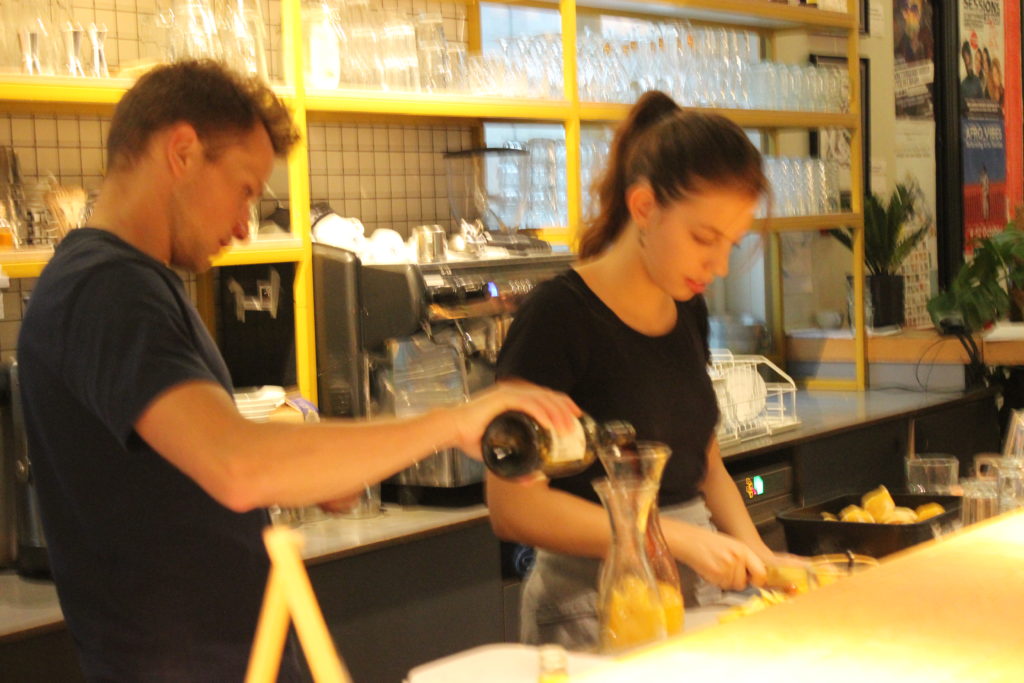 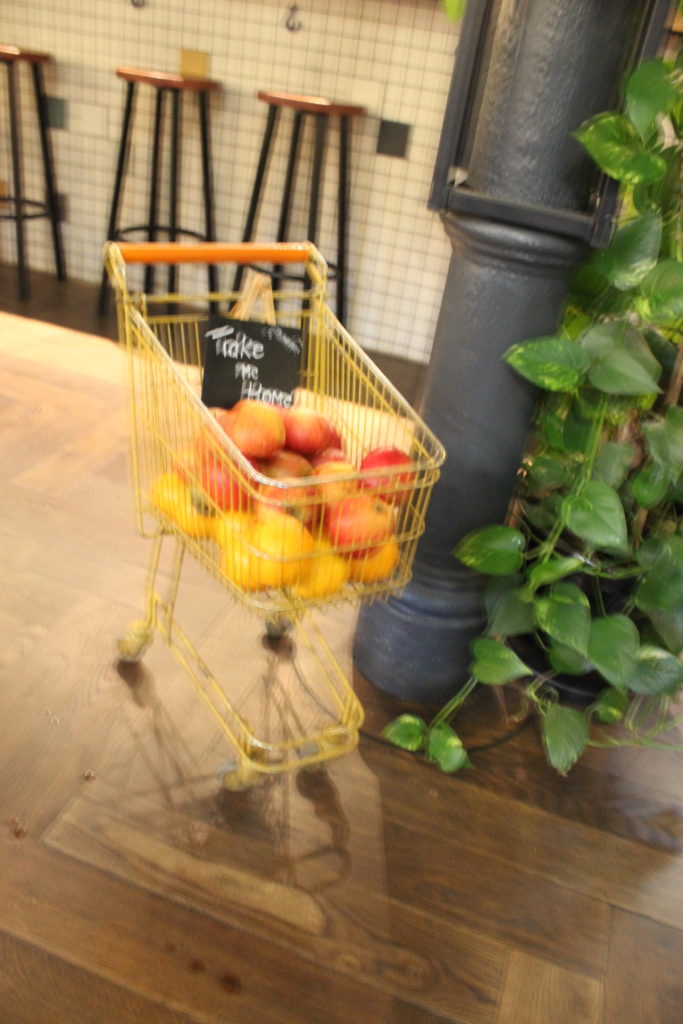 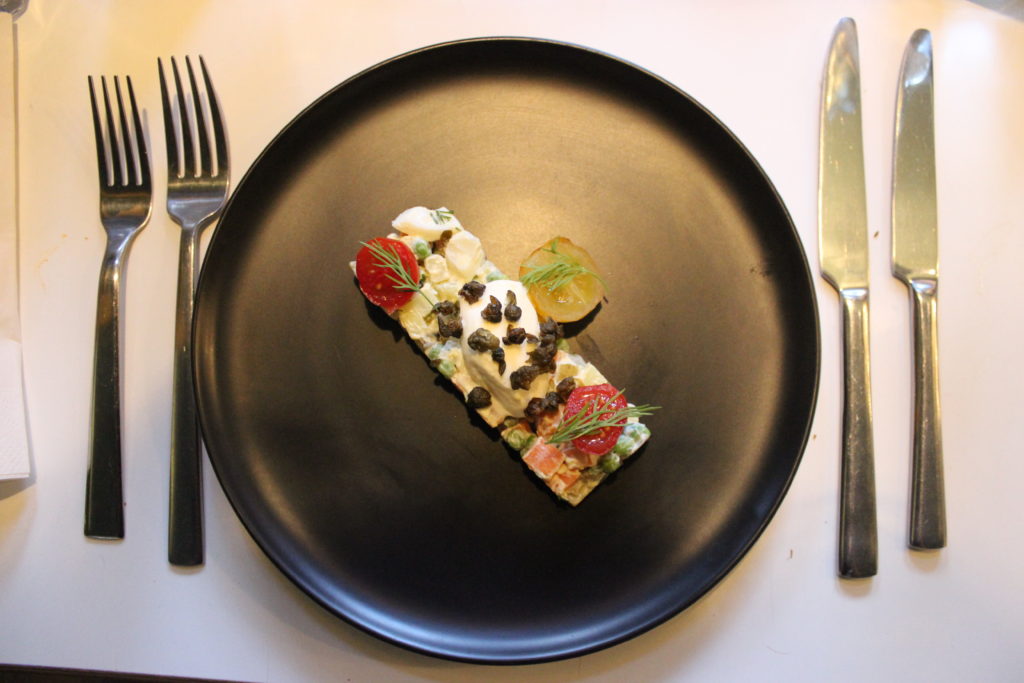 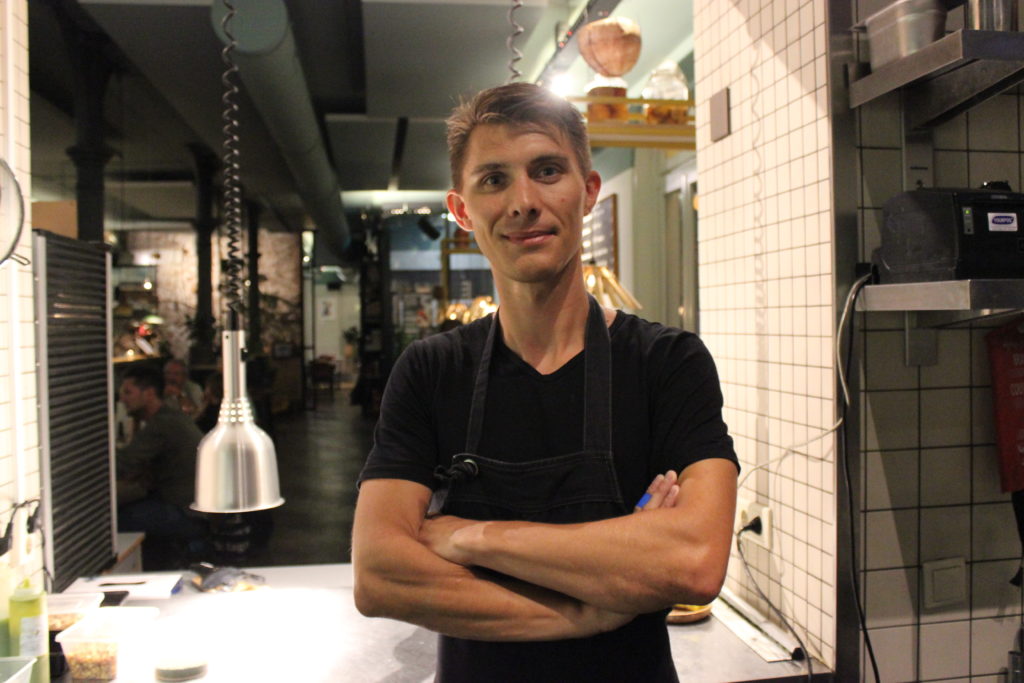 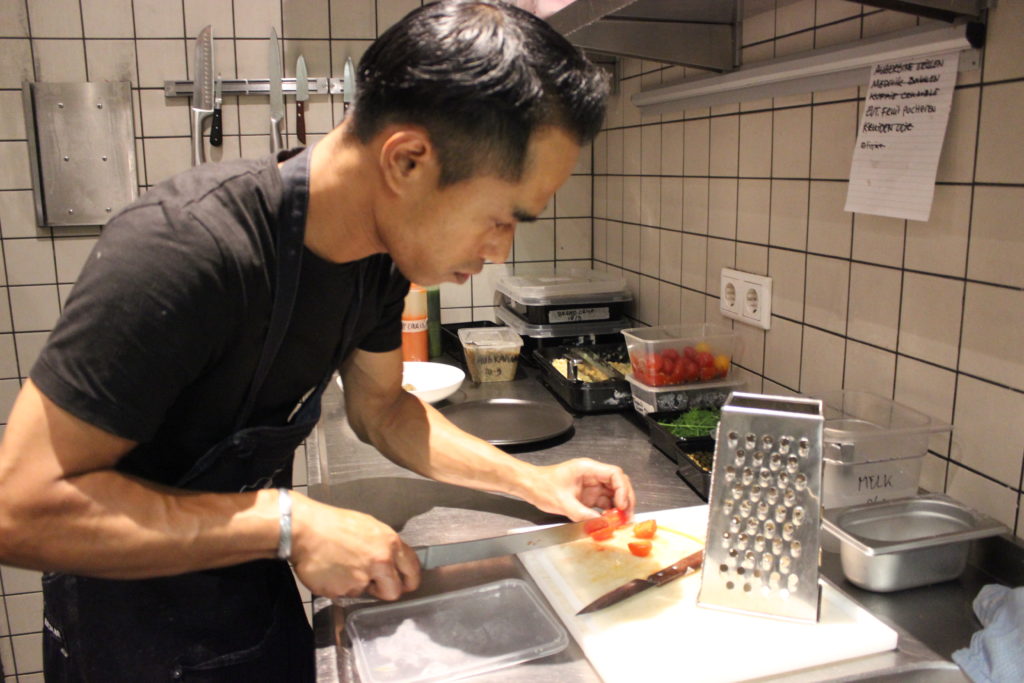 I can’t believe that this food was destined for the bin. So why is so much food going to waste?

‘It’s mostly due to superficial blemishes, but sometimes it’s overproduction’ Jill explains. ‘Supermarkets want their shelves to look full. But that means that they end up with too much food on their hands, and they chuck it away’

It’s win-win: supermarkets get rid of their excess food, InStock get a free source of ingredients, and diners enjoy reasonably priced, creatively executed dishes which don’t harm the environment.

‘A nice public debate has started’ Jill smiles. ‘Now that we’ve helped them see how much good food is going to waste, they’re hungry for change’.

The following morning, a Saturday, we head northwest to Noordermarkt, an organic farmer’s market. It’s absolutely heaving: at 11am, it takes a good thirty minutes to saunter down the single aisle of stalls. Fishmongers fry herring, cheesemongers slice Edam and Gouda, and baskets are heaving with groceries.

Attracted by an aromatic spanakopita, we get talking to Efi, founder of The Greek Deli.

‘Here, taste this’ she insists, thrusting a crumbly chunk of Feta at me. ‘It’s hard to make it organic, but it comes from a happy sheep on the island of Lesvos’.

It’s delicious: astringent, powerful and sour in all the right ways.

‘I buy the food directly from the farmers in Greece’ Efi explains proudly. ‘They know their produce through and through’

Clearly, it’s working. Our conversation is repeatedly interrupted by eager customers, many of whom are obviously regulars.

‘Efi, she’s amazing’ one woman gushes, switching from Dutch to English. ‘She’s also an exhibiting artist, using glass. And her food is incredible

We taste juicy olives, delicious dolmades, and fragrant honey. Efi expertly handles the customers, while feeding us a treat or two like a master matron commanding her kitchen.

‘I give the price the farmer’s want’ she explains. ‘A few of them have never even exported before. They’re all organic or ecological’ 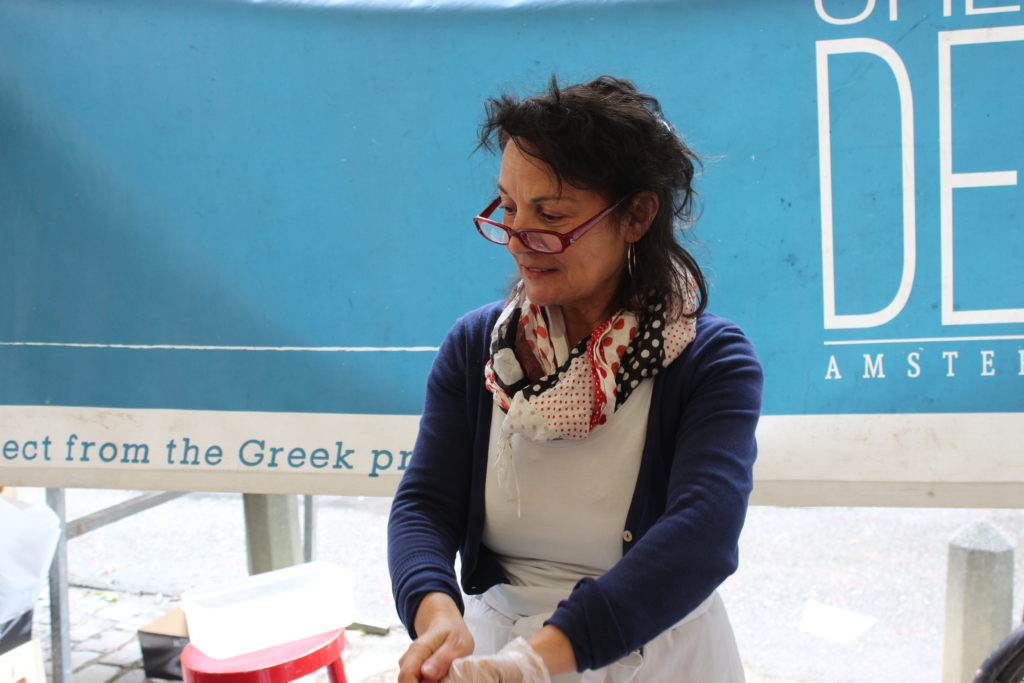 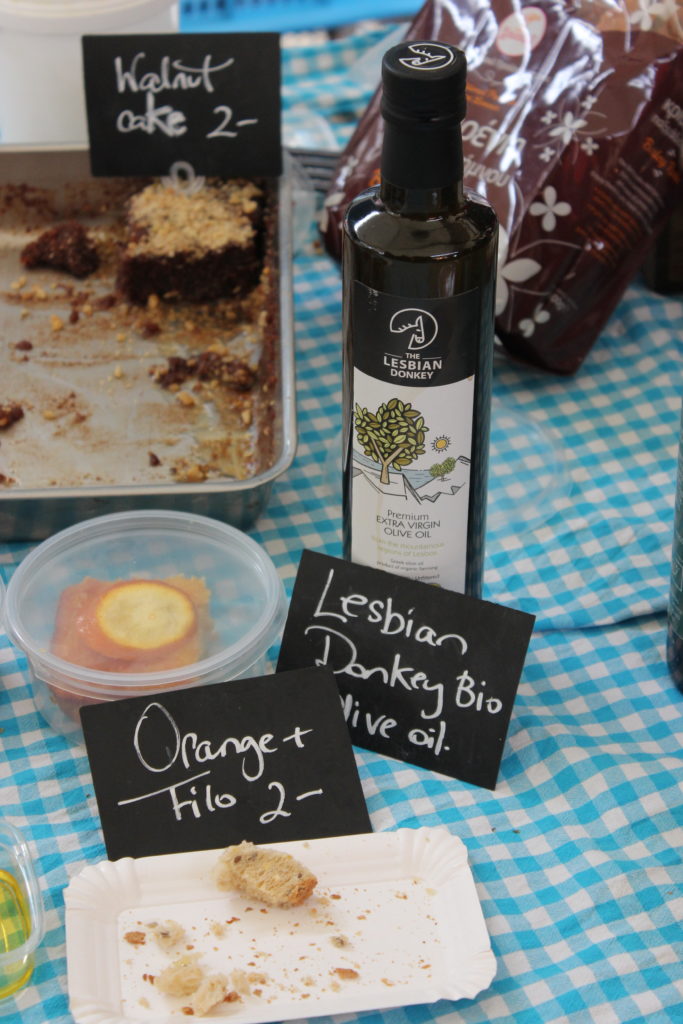 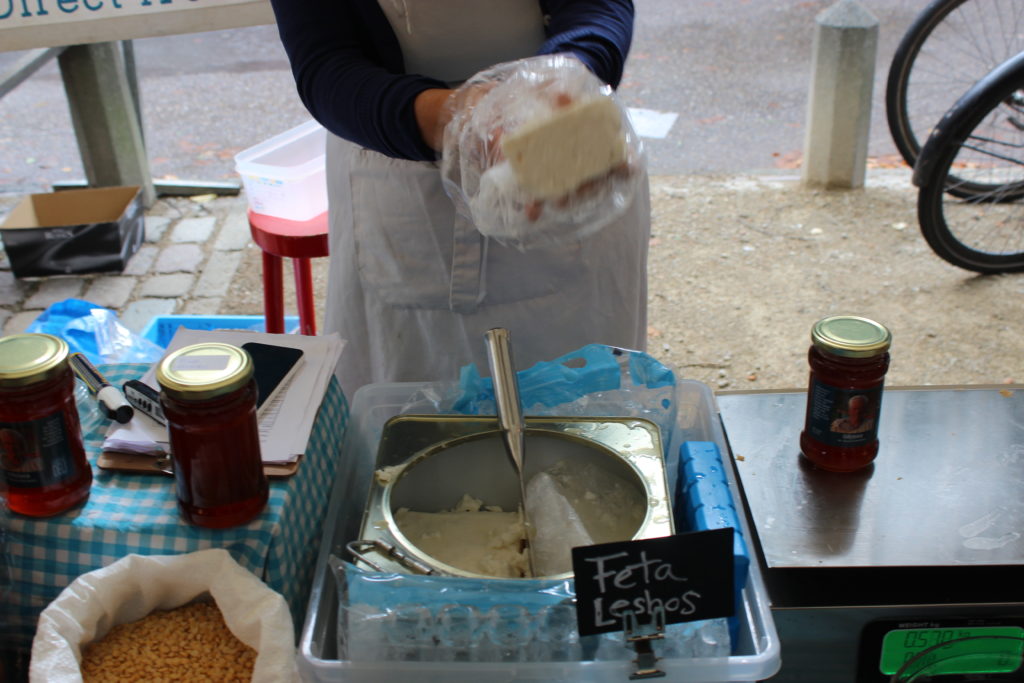 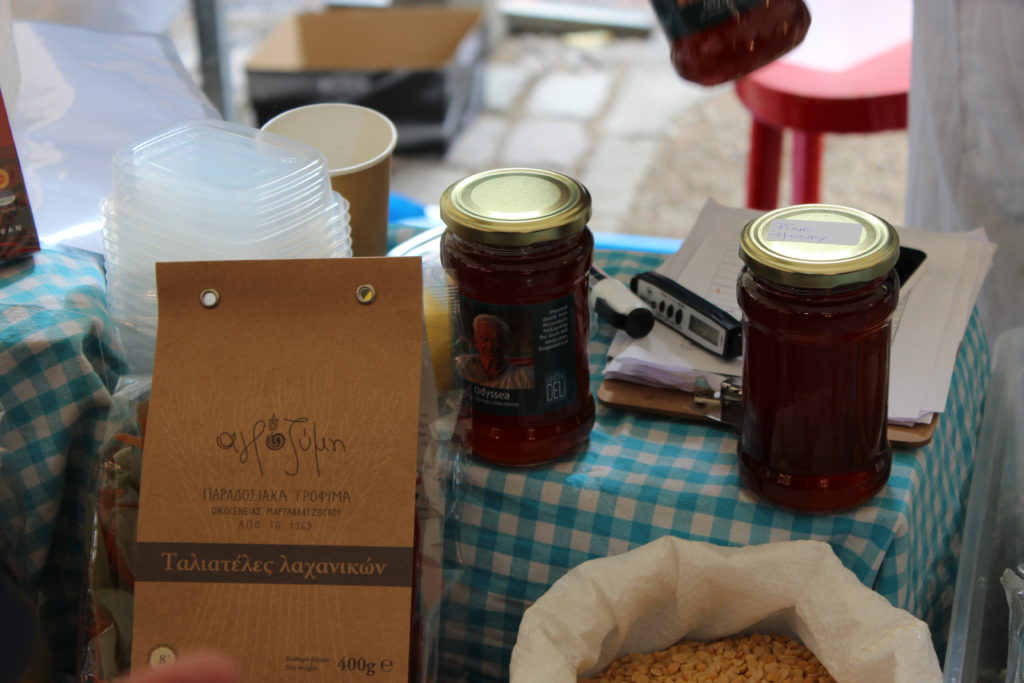 Finally, Efi hands over a bulging sackful of Greek goods to the last customer.

‘We have to change our relationship with food’ Efi begins. ‘With high quality organic produce, a little goes a long way. We have to learn to eat better and less’

So are Amsterdam’s foodies on board with her mission?

‘Things have changed, definitely. It’s getting so much more conscious. Most of my customers now bring their own containers, which cuts down on plastic waste. We have to help each other learn to make positive changes’

Across the channel, in Amsterdam’s Noord district, Efi’s ethos has found a home. De Ceuvel is an award-winning co-created community space, built by volunteers in what was formerly disused docklands.

All of the enterprises here are ecologically-driven, and many of them are housed on canal boats. There’s a seaweed farm, herb and vegetable gardens, a bar, and a workshop space.

We step into De Ceuvel’s cafe. Everything has been salvaged or repurposed, from the chandeliers made from bicycle wheels to tables made from recycled parquet flooring.

Kombucha, smoothies, locally-sourced coffee – the menu is as you’d expect, except for ‘Schipol geese’. I ask the waitress about it.

‘We can’t really offer meat, because it’s not sustainable’ she explains. ‘But at Schipol Airport, hundreds of geese are shot to stop them from flying into the aeroplane engines. The geese were going to waste, so we decided to add them to our menu’ 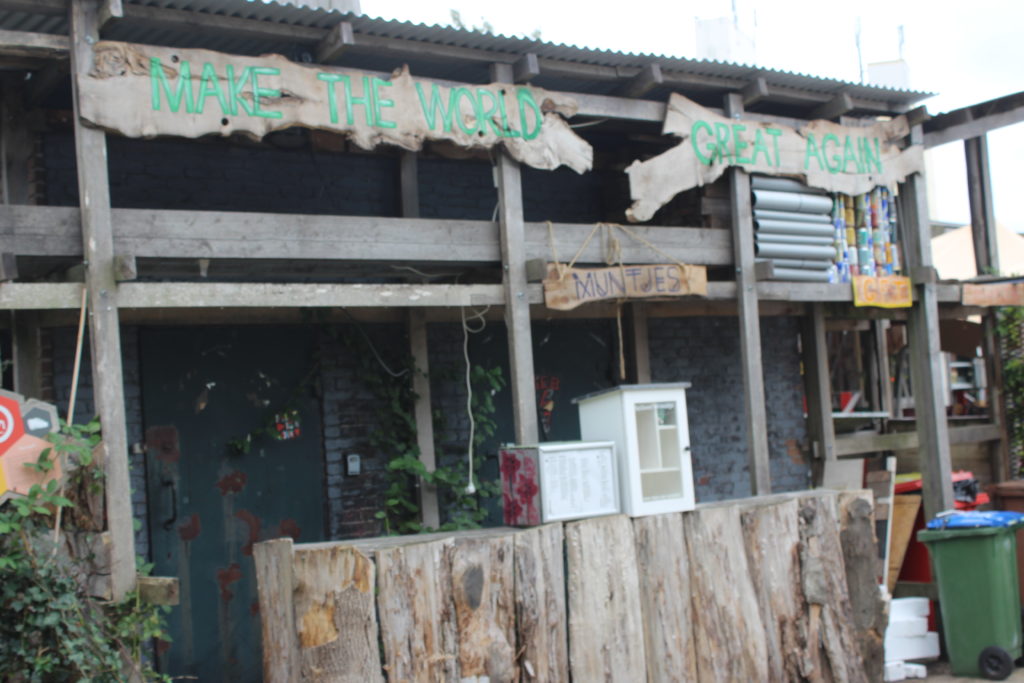 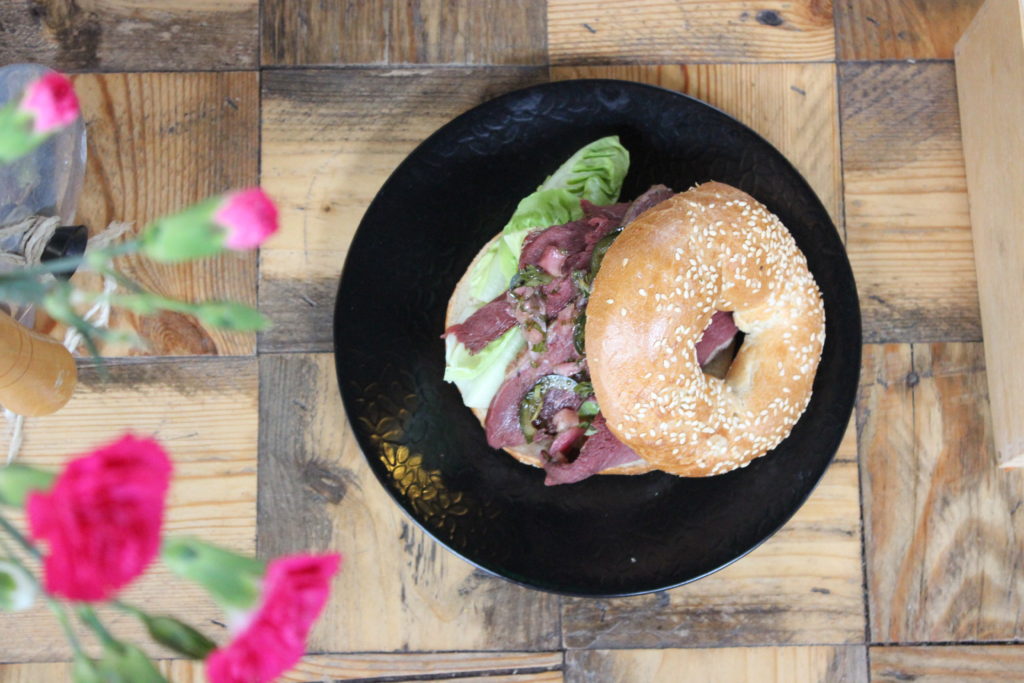 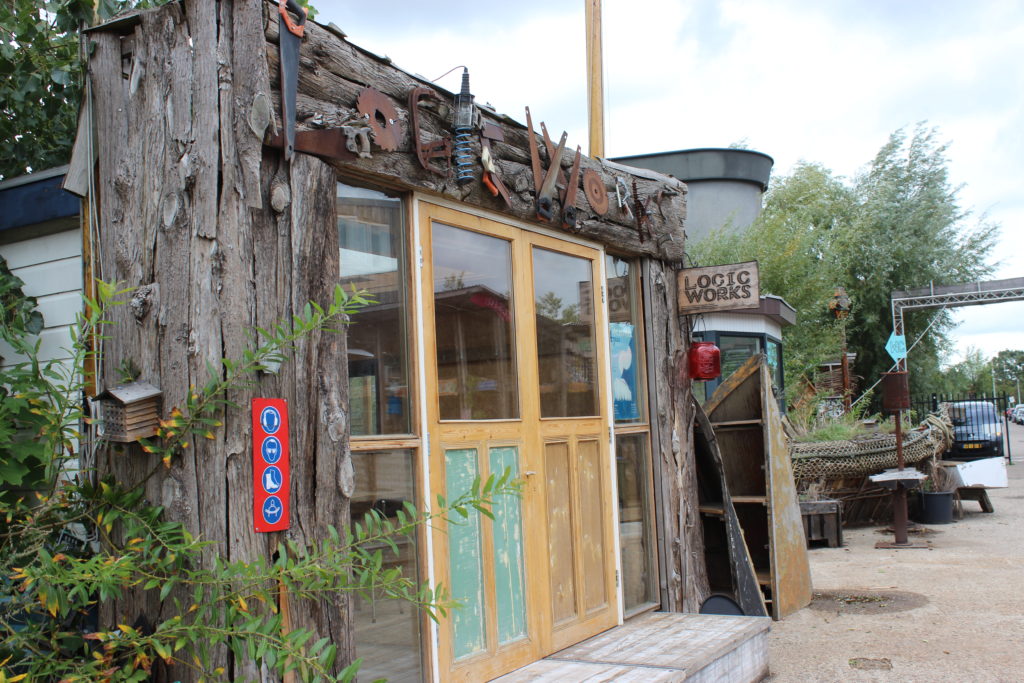 It’s an inspiring story, and we order the smoked goose bagel despite being warned about the potential to find shrapnel inside (‘It’s only happened once, but…’).

When the sandwich arrives, my hitherto-hungry photographer suddenly becomes wary. But I dive in. The bagel, studded with sesame, is delicious. Plum-coloured strips of smoked goose bring that rich, gamey flavour, peppered by bursts of rocket.

I’m suddenly reminded of QO’s rooftop greenhouse. Although they probably can’t rear goose up there, the spirit behind De Ceuvel and the QO is the same: a courageous commitment to sustainability, reshaping Amsterdam for the better.

To find out more about what’s going on in Amsterdam and to book your trip, visit iamsterdam.com/en

Get your ticket to Amsterdam with Eurostar from just £35 one way.

Book your stay at QO Hotel from £109 per night 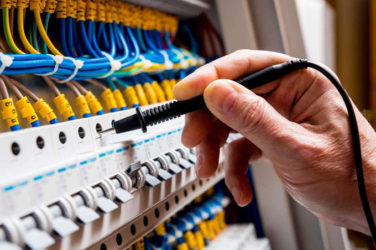 words Alexa Wang Whether you own a home or live in a rented apartment, ... 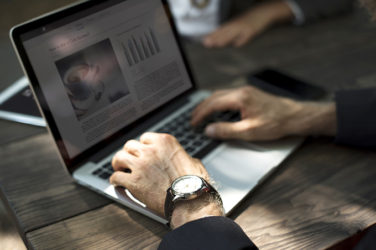 Tools Freelancers Should Invest In 2021

words Al Woods The word freelancer evolved from freedom. Freedom to do what you ... 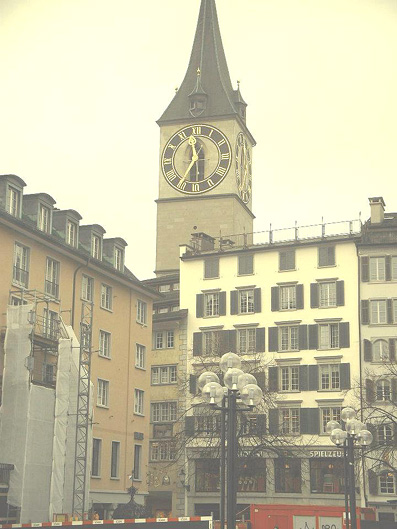 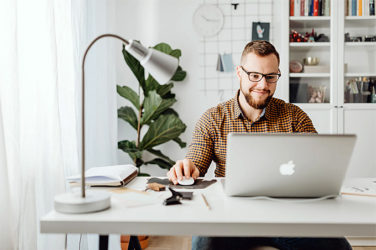 How to Protect Your Privacy and Keep Your Information Secure

words Alexa Wang The Internet is arguably one of the most important inventions of ...