With Perpetual Surrender, Toronto’s DIANA have produced my favourite, most huggable album of the year, and they took time out of their first European tour to chat to me in my home town of Sheffield.

On the day of the interview, I had a eureka moment. I decided for sure that Perpetual Surrender is a concept album of songs from an unborn child to her mother.

Ok, you’re going to have to bear with me for this. Here’s the science bit: Listening to the album is like being in a womb, with sounds seeping in from outside through watery, amniotic filters and sliding basses that sound a bit like whale song blaring out from one of those naff CDs you get in antenatal classes. Singer Carmen is drifting in an internal sea, hence the sound of waves and that gorgeous buoy bell ringing at the end of Perpetual Surrender. The command to “lay your hands on me” in Born Again is to the midwife, and there are even vocal effects on New House that sound as if she’s passing out through the uterus…

I may sound certifiable, but this concept has been done before by someone the band admits is an influence. Kate Bush’s Breathing is a five-minute epic sung by a foetus to its mother in the aftermath of nuclear war. It’s melancholy and melodramatic and drenched in emotional layers of sound, just like Perpetual Surrender. So stick that in your pipe and smoke it.

When I meet DIANA before their gig at Sheffield’s Bungalows & Bears, I share my theory. “It starts with the sperm, which is a Foreign Installation,” I explain. “And at the end,” I try to seal the deal, “you’re Born (Again) through the ‘Curtains’…” Their faces erupt into scandalised laughter. “And Anna’s the name of the baby,” suggests Carmen, indulging me. “That’s hilarious – You should have executive-produced the album, man!” says Kieran. While it made sense at the time, I can tell it’s not what the band intended. “That’s the beauty of it,” adds Carmen nicely, “it’s whatever you want it to be.” As well as harebrained ideas, I use the mic the wrong way round for half the interview, so I’m lucky the band are so easygoing; Bono would have pushed me out of his helicopter by now.

Stretching the analogy, there’s an unmistakeable ‘umbilical’ quality to the lyrics – the sense of being attached to someone and not knowing if you want to be. Did I at least get this one right? “That’s a big one,” Joseph agrees, “That’s in a bunch of songs – New House, Strange Attraction, Perpetual Surrender, Foreign Installation – there’s so much of that in life, being tethered to somebody even though you know logically you want to be free of that person, but for whatever reason you just keep going back…” So, you’re in a state of ‘perpetual surrender’ to them? “Well,” counters Kieran, “Perpetual Surrender is about respecting the tether…“

The band’s sound palette is purloined from OTT 80s pop – raunchy sax and sensuous synths – and makes the mood unapologetically emotional. Michael Mann’s 1986 film Manhunter sums up the era’s emphasis on feeling. This interview actually came about when I saw DIANA at POP Montreal and likened them to the film, according to Joseph “one of the best compliments we’ve ever received.” Then, I emotionally blackmailed them into giving me an interview. In the film, everything’s saturated with sound and colour, drenched in feeling, just like the band’s lush harmonics. “I remember when you said that about Manhunter, I was like, yeah, amazing!” says Joseph, “I fucking love that film, it’s so many things…It has really weird highs and sharp edges, [it’s] so over-acted but at the same time it’s really tasteful and artful; and at the end the residual tension sticks with you. If our album can leave people feeling that way, that’s amazingI“ Manhunter is above all a melodrama, where the music and mood are all-powerful. For me, the only other thing that comes close is Twin Peaks, where it’s almost like the show is written around the music. People talk about songs soundtracking their lives, but there are so few albums that work together like the songs do on a soundtrack. Perpetual Surrender is one, pulling you into its swirling melodrama; and melodrama is usually a feminine domain.

“If the music had a gender, it would be female,” agrees Carmen, the face of DIANA, dominating the stage when they perform and practically the solo star of their videos. In interview however, the band has the opposite dynamic, Carmen sitting a little grumpily with her hood up and letting the boys do most of the talking. I’ll let her off – she is a singer after all. Second video Perpetual Surrender is composed solely of shots of Carmen’s face and body, folded like origami and manipulated by unseen hands. While sometimes the chance effects are prettifying, others are less so. “Yeah, they’re pretty hideous,” she admits. Women in pop never look anything less than perfect, so permitting the director to fold up her face any way he liked was really brave. Carmen sees it as a sign of things to come. “This is the era where I see the end of physical perfection. The TV show Girls went a long way to breaking down that barrier. There are less perfect female role models in the media all the time. [The video is] like anti-Photoshop. I’m really happy and proud of it.”

“Over-saturated and underwhelmed” croons Carmen at the start of the album, and I can’t help thinking it’s a comment on 21st Century popular culture. “It was about trying to take the traditional song form and use sounds you’ve heard before,” says Joseph, “but subvert it and make it new and interesting.” Although not overtly a ‘message’ band (are there any left?), they admit to having an ideology. “Pop music has gone so easy, every part of it is too easy,” argues Kieran. “It’s good to challenge and enlighten people at the same time, to demand a little more…As our friend Nick says, ‘you have to put the pill in the ice-cream.’” I suggest the album is like a Trojan horse, using pop melody to smuggle deeper feelings into the minds of listeners. “I like that analogy,” says Kieran, “It’s about writing music that respects your audience. Making the album, there was a shift in ideology from other bands we’ve been in, where I felt for the first time we were making something that was right and meaningful to us.” Joseph agrees, “I want to connect and relate to people in an interesting way, make them feel something that maybe they haven’t felt before but [which] is familiar or new or interesting.”

Previous reviews have called them a ‘guilty pleasure’, a back-of-drawer genre it’s only now becoming fashionable to admit you enjoy. I ask if lush 80s pop has always something the band has confessed to liking. “No,” says Joseph categorically, “When I was in Grade 9 [14-15] I got into punk so I sold all my hip-hop CDs. There were times I was much less secure, for sure, but throughout all that I’ve always loved that type of emotional music – George Michael, Michael Jackson – it’s emotional, catchy, poppy. It’s something I’ve always gravitated towards.” Kieran came at it from a different genre altogether, adding a new set of sounds to the palette. “I’m really drawn towards the craft of songwriting. I listen to a lot of Country, which is almost just the songwriting. It’s so under-ornamented. For me, whether it’s Paula Abdul or Hank Williams or something much more sophisticated, I love the emotion. My dad’s a huge Elvis fan and I love it when he’s playing that. You feel it all the way through. Emotional’s not a dirty word.”

“It’s not necessarily a feminine word either,” says Joseph, arguing against the gender pigeonholing of the band. “It can be a man in touch with his emotions like Roy Orbison or Elvis…It can be very masculine to not be afraid to put your emotions out in a very open way.” As someone who cries way more than my girlfriend, can I get that on a T-Shirt? There’s the matter of their name though, which despite the “vaginal artwork.” Is, dare I say it, frigid? “You’re saying that coz you’re British” admonishes Carmen, and Joseph pips in “Lady Diana was sexually liberated!” I stand corrected. Perhaps she was actually the sexiest Royal ever? “Well,” confesses Carmen, “Prince Will’s pretty cute…” No, the band contend, DIANA is a sexy name, just not stripper sexy. “And she was a Roman Goddess,” adds Kieran, before laughing, “It’s no big deal.”

Perpetual Surrender is like a secret, sexy file on your computer that you open when no one else is looking, or a soft -sprung bed inviting you to sprawl across it when you’re alone in the house, and these stolen moments are what make life worth living.

Perpetual Surrender is out now on Jagjaguwar 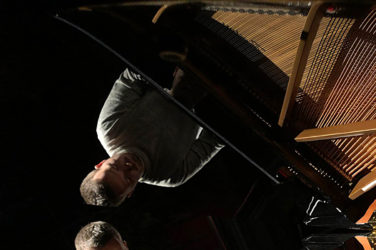 Fort Romeau Kingdoms New Album Review by Matthew Kinlin There was likely to be ...