On the surface, the area around Waterloo station might not seem like such a strange or dark place. However, upon looking hard enough, a bizarre current is noticeable, pulsating through the streets; the remnants of cardboard-city tucked away in the subways, free-runners prancing about the rooftops and, deep underground, a cavernous space dripping with history, silently gathering dust beneath the relentless tumult of the city. This space, The Old Vic Tunnels, is perhaps Waterloo’s best kept secret, and is currently being transformed by producer Tim Wilson, founder of Heritage Arts Company, and his team to become the venue for VAULT London Arts Festival, a three week festival brimming with exciting events where opera, film, theatre, music, dance, partying and comedy are transformed into unexpected and intriguing new forms. I met with Tim for a cup of tea to find out about his inspiration behind the project.

Surrounded by countless teapots and cups, Tim shakes my hand apologising for his paint-stained fingers. ‘Took some time off for some graffiti!’ he says, laughing. ‘Haha, no, just been spending the morning spray-painting ‘VAULT’ on the back of t-shirts.’ He smiles and sips his tea, leaving slight black fingerprints on everything he touches. Tim’s excitement for the opening of VAULT is clear as we discuss what the audience might expect from it. ‘Oh you’re going to have a great time!’ he says when I tell him I’ll be going to one of the ‘Hammer’ film-screenings, ‘the cinema’s probably one of the most terrifying tiny little spaces to watch a horror film! The Flicker Club’s gimmick is the reconnecting of films with their literary origins. They have a personality connected with the film you’re watching reading from the source-text at the beginning. Adds a bit of spice to the whole film-going experience.’

Most of the events in VAULT seem to reinvent genres in this manner, or old works, such as Silent Opera’s silent-disco inspired production of La Boheme, The Kindle Theatre’s re-telling of Clytemnestra through heavy-metal and Rollmop’s digital story-telling event. ‘There’s something great about combining the old and new.’ Tim says, taking the teaspoons on the table and rearranging them in a diagram ‘Old work, new work,’ he says pointing to one spoon, ‘and old audiences and new audiences’, pointing to another. ‘This bit’s really tough: new audiences with new work, but this bit…’ Tim points to where the spoons cross, ‘is what we’re doing: new readings of old work, so everyone knows what we’re talking about.’

I ask him about the festival evoking darkness and horror and he replies ‘Being underground in the tunnels does evoke some sort of darkness. In these sealed industrial zones, there’s a sense of the walls closing in… It’s a brilliant sort of place to be making anything. The space makes things seem more sharply and precisely defined. It’s a wonderfully immersive environment. I think to read it as horror is the first of many layers,’ Tim says thoughtfully. ‘I was watching the Kindle Theatre’s Furies’ rehearsal yesterday and there’s this heartbreaking moment where one of the characters sings ‘my love is lost forever’; she’s on her knees, and at the end of the song a train came over and it sounded like her heartbeat! It was one of those electrifying coincidences where I thought, I hope that’ll happen for every show! That it’ll fit in in that perfect, unpredictable way.’

Before parting, Tim gives me a tour of the tunnels, leading me through the impressively expansive main space, the cinema where rows of velvet chairs are gathered under a low-arching, brick ceiling and the pink-draped set of the Silent Opera. We shuffle through piles of autumn leaves in another space filled with trees and eventually emerge back out onto the streets of London. Before saying goodbye, I ask Tim what type of audience he thinks VAULT will appeal to and he cheerfully says ‘If I was going to bracket them, I’d say, um… humans! I know it’s a cliché to say this, but there really is something for everyone.’

You may remember our story about the NOW TV Movie Festival a few weeks ... 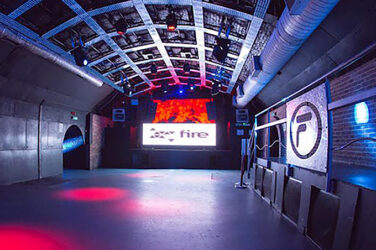