Some adventures belong in the pages of fiction or on the silver screen, and this adventure headlined by these three kings is one such adventure. “Why live when you can rule” is the statement or question that adorns the poster for Jordan Vogt-Roberts’ The Kings of Summer movie release. 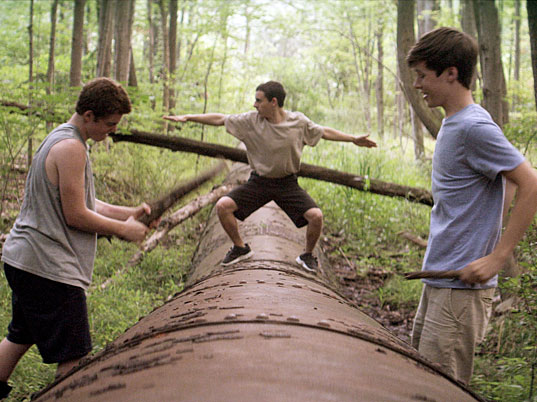 Is it an explanation for the choices these teenage kings make, or is it questioning the film’s audience who occupy the world they happen to forsake? The Kings of Summer is Jordan Vogt-Roberts’ debut feature. It tells a classic American tale of youthful rite of passage wherein three friends assert their independence from their parental home by secretly heading off into the woods to build a house.

The Kings of Summer joins a sub-genre that comprises a collection of seminal films, from Nicholas Ray’s Rebel Without A Cause and Francois Truffaut’s The 400 Blows. Include in that list New American Cinema’s The Last Picture Show and American Graffiti, as well as the classic eighties Stephen King adaptation Stand by Me.

The adage “Art imitating life” suitably describes this latest addition to the sub-genre. The collaboration between Vogt-Roberts and writer Chris Galletta – his first screenwriting credit – illuminates the habitual nature of art to imitate life, the film and the house in the urban wilderness one in the same.

The Kings of Summer is an accomplished first script which successfully fuses popular culture references with a hyper fast paced, cynical and highly humorous dialogue. Galletta and Vogt-Roberts skill however is in giving the comedy a sense of weight by offsetting it with drama and pathos. As such the film dwells both on the coming of age dream and the coming of age nightmare. Of course this is a genre that is laced with dark undertones mixing optimism with cynicism or happiness with sadness.

Alongside the re-release of the classic 1982 cult gem The Last American Virgin by ArrowVideo on September 16, The Kings of Summer contributes to a fitting double bill the continuation of the coming of age drama following the re-discovery of a now cult classic.

Vogt-Roberts  film shares much in common with The Last American Virgin, though there are definite distinctions that separate the two. The Kings of Summer offsets The Last American Virgin by retreating from the urban setting, which is the catalyst for the youthful rebellion, and it is here that it looks back to Bertolucci’s The Dreamers. In the attempt to forge a new existence rather than accept the one forced onto them, lessons are learned about family, friendship and fundamentally the act of belonging. It is a reflection on human connections whether or not forged by free will that captures the angst and claustrophobic feelings of youth, and depicts the inevitable confrontation with emotions innate to the coming of age journey.

The insults, wit and poor man’s sarcasm flow at times as fast as a collection of Arnie one liners, but at all times the cast embrace the comedy, drama and pathos of the material. Vogt-Roberts assembles an impressive cast of actors who make it their film, and in so doing shoot dead the auteur theory. As well directed, written and performed, this coming of age story is a product of collaboration.

The Kings of Summer is released on Blu-Ray & DVD by Studio Canal on September 30th.

The Last American Virgin is released on Blu-ray & DVD by Arrow Video on September 16th, pre-order from www.arrowfilms.co.uk. Diane Franklin’s official autobiography The Excellent Adventure of the Last American, French-Exchange Babe of the 80s is available now from http://www.dianefranklin80sbook.com/.

The Kings of Summer DVD Review by Paul Risker