Vogueing with The Prince of England

As skinny as a coat hanger and as lithe as an eel, this is underground dancer Nikolas Snode – widely known among the cognoscenti by his sobriquet Prince of England – who kindly introduced me and Spitalfields Life contributing photographer Patricia Niven to his eclectic and glitzy circle of friends on Saturday, for a thrilling night out at “On the Rocks” in Shoreditch where he is one of the shining stars of the current renaissance in Vogueing. “You’ll see craziness!” he promised.

by The Gentle Author of www.spitalfieldslife.com; photography by Patricia Niven

Arriving at one in the morning, it was as if we had walked into a magical dream. We drifted in elated disorientation in half-light through the billowing coloured smoke and lasers, encountering all manner of ethereal creatures, until we discovered the catwalk where colourful spirits strutted and tottered with endearing whimsical idiosyncrasy as they assumed the fashion model poses that are the constituents of Vogueing. Yet the atmosphere cleared in an instant when Prince appeared in disco pants and a hoodie, demonstrating the hair-raising ability of a young John Travolta to draw attention on the dance floor. With a spring coiled up inside him, the core of his being was manifest and everyone watched rapt as he uncurled his spindly limbs with heart-stopping control.

“I am an Old Way Voguer. It’s all about exteriors and it’s fierce. It’s a mixture of military and martial arts and hieroglyphics. It’s all about lines…” he declared to me with a thin crooked smile of jollity afterwards, still coming down from his performance yet raising his narrow eyebrows as his eyes shone in eagerness to proclaim the credentials which connect him to the origin of his chosen form of expression.

“My mentor is Archie Burnett of the Legendary House of Ninja, who was taught by Willi Ninja – known as the godfather of Vogueing. They have a community in New York, like a faith house, where Black and Hispanic kids who are thrown out of their homes can go to stay and learn dance. But since I am in the UK, I skype them twice a week…” he revealed. Inspired by this direct connection to the House of Ninja and so thin he looks like a drawing of himself, Nikolas has constructed a life devoted to heroic excellence in Vogueing.

Undoubtedly, Vogueing has unlocked something extraordinary in Nikolas, and I was delighted to be welcomed by his affectionate community of cartoon princesses of indeterminate gender and pop urchins in outsize singlets – who meet to party together in the early hours, and enjoy being playful in the free expression of their imaginative selves. They are the admiring courtiers and he is their Prince, with the redoubtable Scottee as the court jester in a lacy body suit, in this glamorous secret night kingdom in the Kingsland Rd. “You’ve got to be given your name, you can’t choose it.” Nikolas explained to me cheerfully, “My friend, Supple, the Dance Scientist, said to me, “You should be Prince of England because there is no-one more English than you in the underground scene,” and now everyone knows me as Prince. It’s cool because I never pitched it and I quite like it.”

Then, with an excited gleam of absurd humour, Nikolas, the Evangelist of Vogue, regaled me with the legend that Vogueing began when the New York Prisons banned pornographic magazines and inmates had to make do with copies of Vogue instead. Frustrated by this, they began re-enacting the models’ poses and staging pose-off contests which became dance battles. Refined by drag queens in the ballrooms of Harlem, the style eventually reached mainstream exposure in the nineteen eighties, though -“Madonna’s song is not even a Vogue song, you can’t easily Vogue to it!” Nikolas qualified authoritatively.

Even at twenty-two, Nikolas is already a seasoned professional who was in Les Miserables for ten months in the West End when he was twelve, and spent his tender years as a working child performer, before emerging as a major talent on the underground dance scene. And with plenty of willing students, Nikolas teaches Vogueing and its counterpart Waacking – a style that draws its vocabulary of movement from silent films. “Most people lack self-confidence and everybody likes to walk like a model, so Vogueing can help increase confidence.” he informed me persuasively, preaching the Gospel of Vogue, “Although Vogueing came out of the drag scene in the first place, the culture of Vogue became so bitchy in the nineties that it put women off, but I am trying to encourage them back – because the idea is to feel good about yourself, not to put others down.”

Fascinated by the possibility that dance can liberate people, I was touched by the delight I saw around me that night among those who take such joy in exploring ambiguous identity. Yet equally, I was aware that there was also an element of masquerading in which gestures can be assumed. “I’m a straight guy who does it” admitted Nikolas shyly, without wishing to sound apologetic, “Although many people would probably assume that I am gay – but I do it because I like the power of it. My mentor Archie was the first straight person to join a Vogueing House. He has a good phrase, he says, “You don’t have to be Chinese to enjoy Chinese food!”

written by The Gentle Author

The Festival of Britain 1951

Pat Flynn’s ‘Half Life of a Miracle’ show is currently appearing at Manchester Art ... 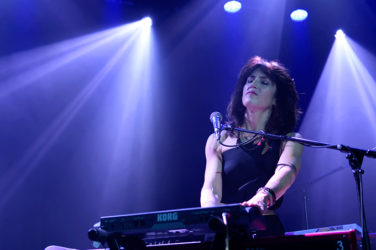