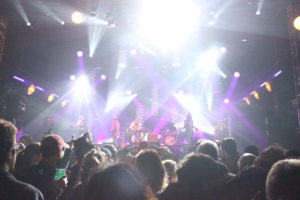 I didn’t know it, but it turns out I’m a big fan of Tibetan Acid House. In fact, before seeing Ko Shin Moon at Transmusicales 2018, I didn’t even know it was a genre. Who would listen to, let alone play, such a wilfully obscure form of music?

But on a deep dark Thursday night in December, it’s undeniable: Tibetan Acid House, with a sitar and synthesiser and a Moroccan oud, is real. And it’s good.

It’s my first show at Transmusicales, one of France’s most prestigious and experimental music festivals, and by the end of the festival Ko Shin Moon and their Tibetan Acid House seem comparatively ordinary. 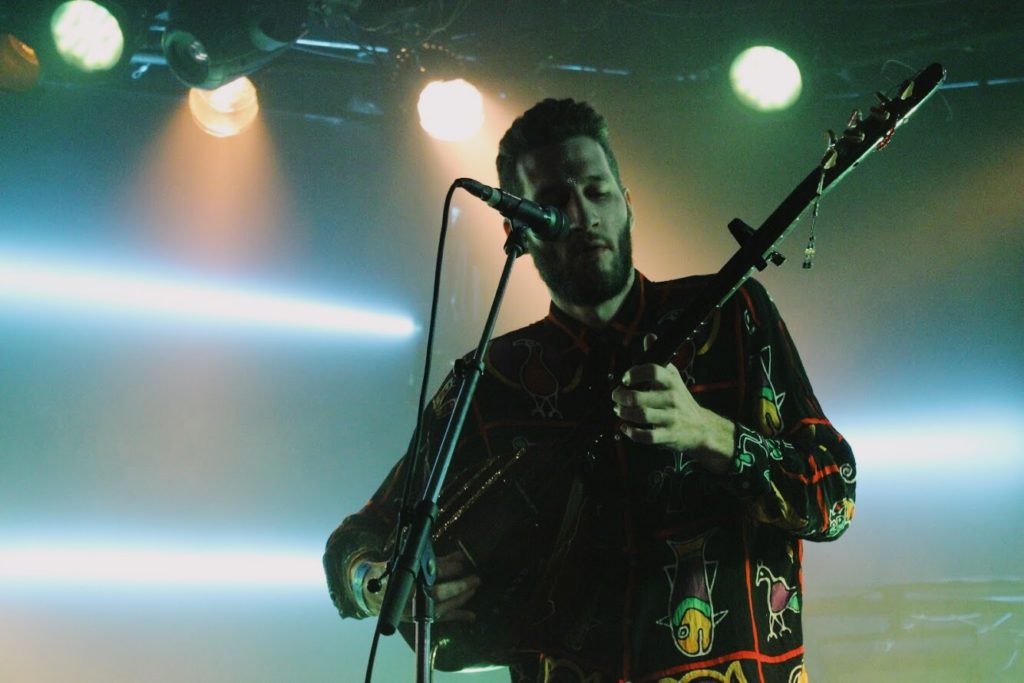 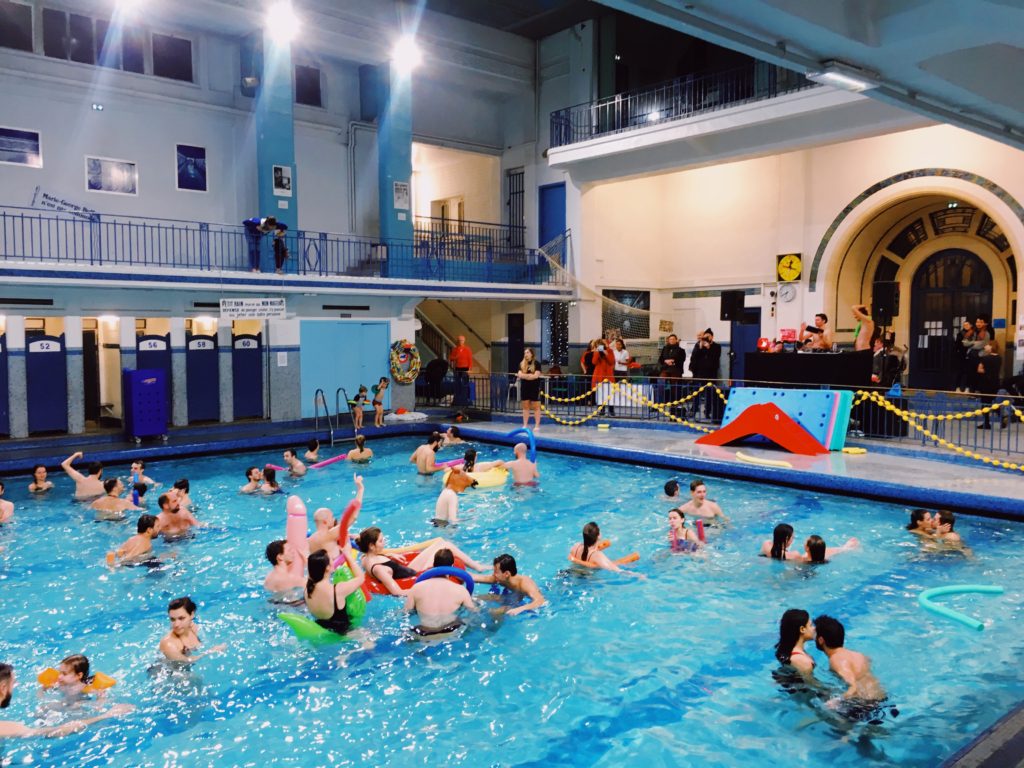 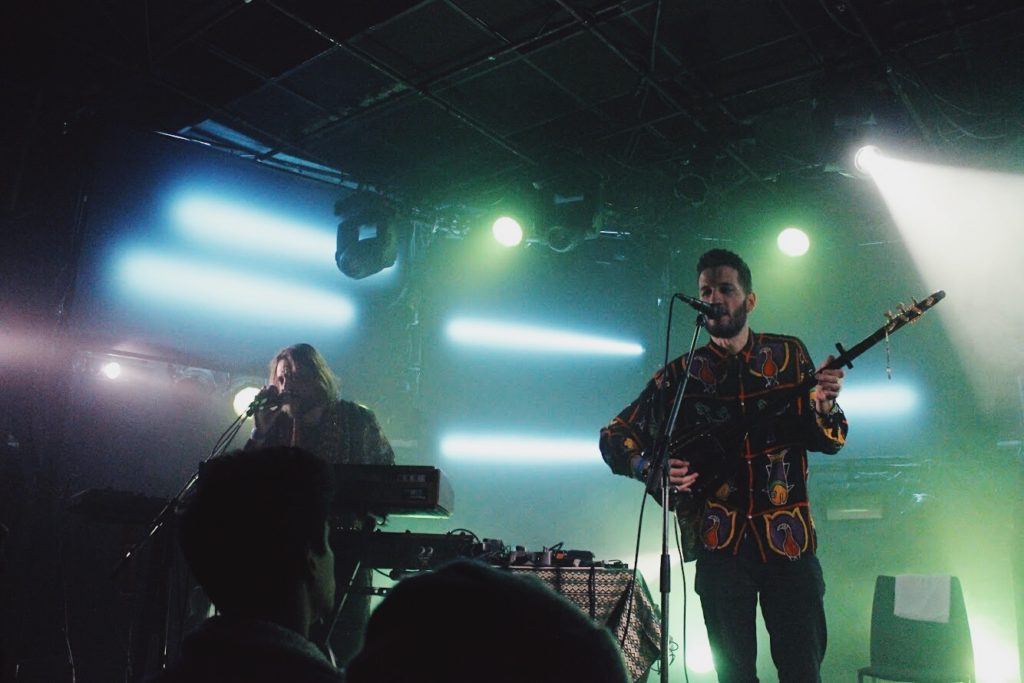 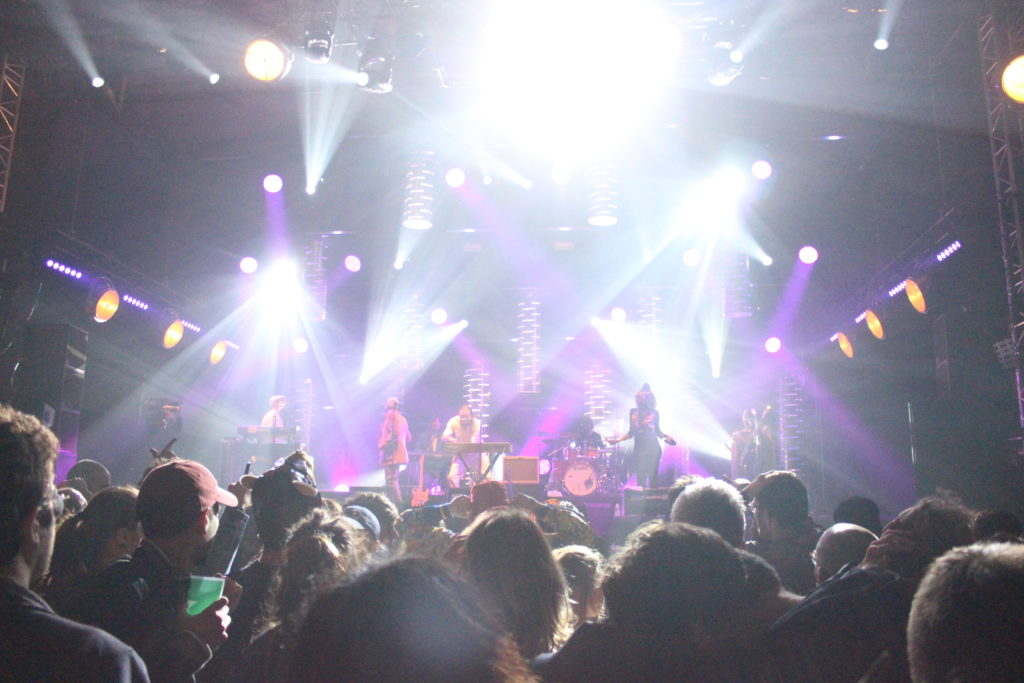 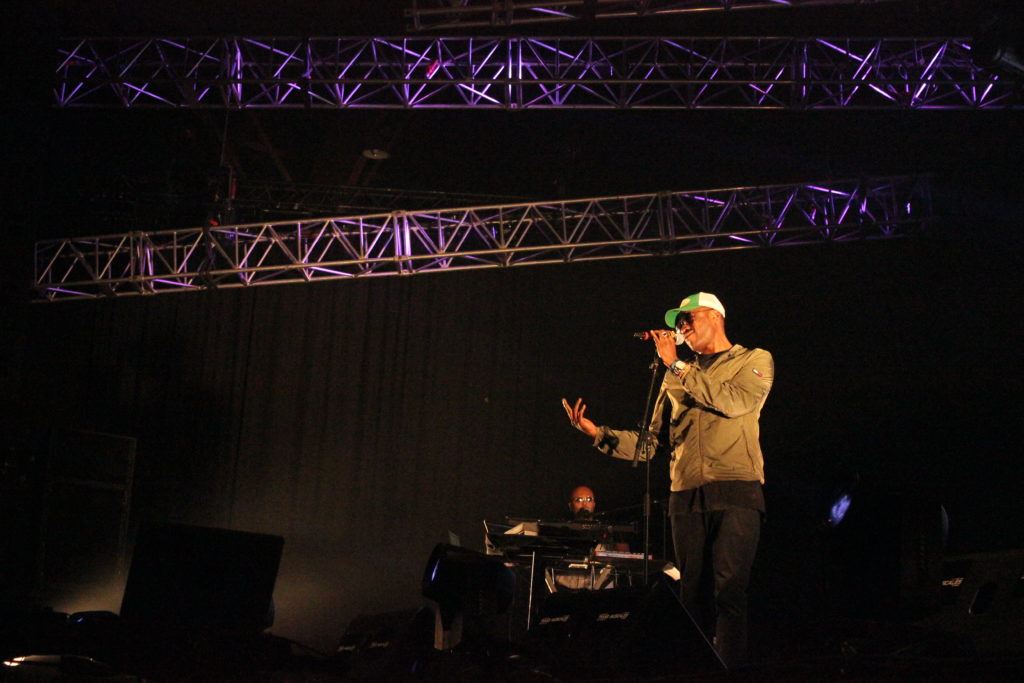 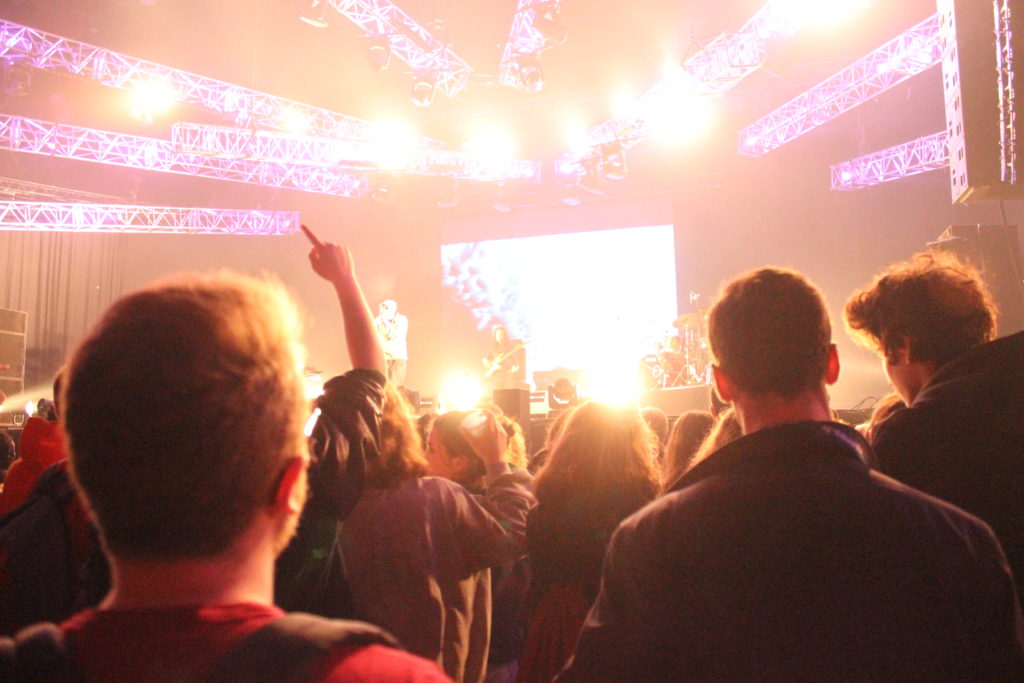 Here in Rennes, Brittany’s biggest city, the weather is also decidedly Tibetan. The beginning of December might not seem like the best time to host of music festival, but Transmusicales has always been different. It was founded in 1979 by a group of music students who chose December because there weren’t others festival to clash with – and, more importantly, no upcoming exams.

Since then, Transmusicales has gained a merited reputation as a kind of finishing school for music pioneers. The Chemical Brothers enjoyed their international breakthrough at Transmusicales 1995. Daft Punk made their festival debut here in 1996. Bon Iver in 2008.

Most of the action happens at the Parc Expo, a huddle of warehouses on the outskirts of Rennes. This anonymous business park, bracketed by the sighing motorway, gives no clue as to the extravagantly eccentric performances unfolding within.

Our shuttle bus pulls up outside, unleashing a horde of revellers upon the Parc Expo. Each warehouse is a stage. A central warehouse serves as a food hall and bar. This being France, the foodhall offers oysters, andouille and a wine-pairing for each meal. Diners sip beaujolais and discuss the music, punctuated by the distant throb of a big bassline.

So, what do you fancy tonight? Some fractal trip hop with Fleuves, or perhaps a splash of West Coast funky-pop synth wow? Either way, it’s going to be tough choice between K.O.G. & the Zongo Brigade or Muthoni Drummer Queen. Remember, though, no hot mayola music until you’ve finished your Tibetan Acid House.

Of course, this sounds made up. This sounds like a conversation between two freshers, trying to outcompete one another in indier-than-thou hipster fisticuffs. Come on, you call that experimental? My favourite album is only available as a range of hand-cut mineral stones, to be dissolved in lapsang souchong. So there.

Despite listening to what others might charitably label ‘unusual’ music for years now, when I first look at the Transmusicales 2018 line-up I fail to recognise a single band. Nelson Beer, Atoem, Madmadam? Nope, nope, and nope. Over a hundred bands, and all of them new to me.

But having no familiarity with the music is liberating. There’s no chasing favourite bands around, no I-hope-they-play-this-specific-b-side-from-their-first-LP, no let downs. Just you, sixty thousand free-thinking French, and twelve musicians trying to coax a melody from what appears to be a samovar.

Our first night at Transmusicales is an education. After witnessing Ko Shin Moon and indie first-pumpers Bigger at UBU and L’étage, two city-centre venues, the music gets much stranger at Parc Expo. Every band we see is different from the last.

There’s Ben Lamar Gay, a jazz cornettist from Chicago’s South Side hip hop scene with an ensemble featuring clarinets and Afrobeats. ‘Thanks for lettin’ us get weird up here, y’all are amazing’ says Gay as he launches into another ruminative, hypnotic rhythm towards his set’s close.

Huddling against the cold, as midnight approaches we traipse through the crowds towards Hall 3, where someone called Vurro is playing. We arrive mid-set, circumventing the crowd to get nearer to the front. Our view of the stage reveals a barebacked man wearing a horned cow’s skull over his head, simultaneously playing the drums and piano.

We blink. Is he wearing – is that – ? But, before we can get our bearings, Vurro waggles his head from side to side, so that his horns hit the cymbals on either side of his piano. It’s absolutely brilliant, and the crowd love it. Vurro’s crowning moment arrives during his encore, where he whips up the crowd with a rousing rendition of the William Tell overture.

From the ridiculous to the sublime, we march back to Hall 9 for The Nagharsh Ensemble. Thought a one-man band in a cow’s skull was out there? The Nagharsh Ensemble have written music to the poetry of a 15th century Armenian priest M’krtich Naghash. Do they do weddings, one wonders?

But they’re not just a great way to score hipster points – The Nagharsh Ensemble are utterly breathtaking. Three female choral singers gallop urgently through the songs like hunted stags climbing to safety, their voices rising steadily to crescendos which have us open mouthed in delight. They’re accompanied by composer John Hodian on the piano, an oud and a duduk.

Each song builds to a stunning climax, taking ten minutes or more at a time, and the effect is transcendental. The Nagharsh Ensemble receive the biggest applause of the whole festival. Hodian urges the crowd to find out more about their music – ‘I’ll be over in the food hall afterwards, and I’d love to tell you more about this incredible man’s poetry’. Writing complex, emotionally powerful ballads to the poetry of a 15th century priest: it’s such a labour of love, and a fitting final act for our night.

The following morning, a Saturday, gives us a chance to explore the city that birthed Transmusicales. Rennes has a reputation for conservatism – sixteenth-century wooden buildings, traditional markets, a focus on agriculture – but there’s an undercurrent of radicalism. It’s one of the biggest student hubs in France, with two large universities and one hell of a student night on thirsty Thursday (jeudi soif). It also hosts a biannual graffiti festival.

Our hotel, Le Magic’Hall, blends Rennes’ two sides. Housed in a former marketplace, Le Magic’Hall has been transformed into a habitable homage to the arts. Rooms are themed around cinema, music, theatre, or dance (mine has a King Kong mural), and there are even recording studios on site. The communal space is one which we’re loathe to leave. Comfy chairs, communal tables bracketed by bookshelves stocked with oversized art books, and private booths for tea and coffee. C’est magnifique.

As nice as the hotel is, we’re needed elsewhere. Across town, at Rennes’ magnificent municipal swimming pool, there’s a rave dans le piscine. Walking beneath the art nouveau facade and through the mosaic hallways, we’re confronted by a DJ playing to a vast pool of partygoers, who smash inflatable penises and foam floaters against the water to the beat of We Will Rock You. Obviously, we dive in.

It’s almost enough to make you nostalgic for some humble Tibetan Acid House.

Plan your visit to Transmusicales 2019 with Brittany Tourism

How to get a free psychic reading 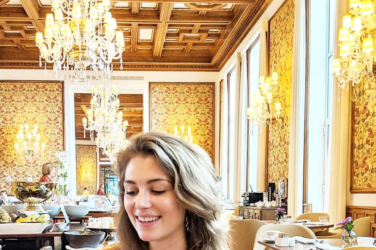 City breaks don't come much slower than Porto and the nearby Duoro Valley, writes ...

We like the whoosh of brooding energy that bursts forth from Saint Agnes’ latest ...