On August 31st Van Morrison will be having a birthday bash on a street he immortalised in song. As part of the EastSide Arts Festival in Belfast, Van Morrison is set to celebrate his 70th birthday with an open air concert on the leafy Cyprus Avenue.

Morrison recorded the seven minute ‘Cyprus Avenue’ on September 27 1968 at Century Sound Studios in New York City, with over dubs added a month later. In November of the same year the album Astral Weeks which included ‘Cyprus Avenue’ was released. It was Morrison’s first solo album since his departure from Them, a band that had catapulted the notoriously moody Morrison to stardom. 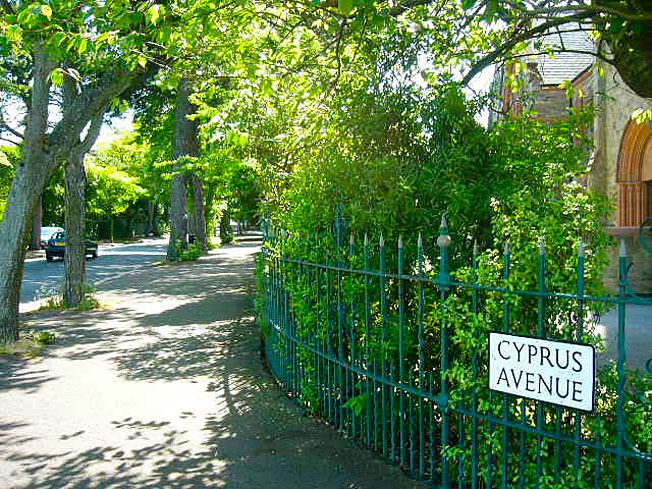 Astral Weeks is an album packed with musical delights such as ‘Madame George’ ‘Sweet Thing’ and of course the title track ‘Astral Weeks’ but, it is ‘Cyprus Avenue’ which stands out as something very simple yet beguiling.

The song tends to combine all sorts of musical genres such as blues, classical and jazz. We hear double bass on behalf of Richard Davis, harpsichord from Larry Fallon and acoustic guitar played by Morrison. Davis delivers the Jazz sound, Fallon the classical feel but it is Morrison’s bluesy vocals that blast through the song.

Morrison’s voice is heaving through a stream of conscious. He brings us to a place and time in Belfast where as a teenager he ventures across the tracks to view a life he can only dream of and a girl he wishes he could be with. He watches her walk down the tree lined Cyprus Avenue as he sits in a car, letting his mind wander as he fantasies her as a lady of high grandeur commandeering the street of high affluence.

Unlike other songs of Belfast at the time, ‘Cyprus Avenue’ is drenched in romanticism. The tree lined street comes out of a more innocent time, before the bombs and guns defined the city of Morrison’s birth.

Morrison grew up on Hyndford Avenue in a terraced house under the shadow of the yellow cranes of the Harland and Wolff Shipyard. Although Morrison grew up near Cyprus Avenue, Morrison sings of it being worlds away.

Cyprus Avenue provided Morrison with a template of what success could bring him. Through the song he observes the upper class life of Cyprus Avenue through melancholic eyes. Morrison finds himself ‘conquered in a car seat’ dreaming of that ‘mansion on the hill.’ He wails all of this through his working class tongue which is heaving in frustration.

A girl catches his attention throughout the song yet it serves as much more than just a love ballad, the girl Morrison sings of, or rather pines for, is a symbol of the good life those on Cyprus Avenue live and in this we hear class differences and difficulties haunting the lyrics.

The romantic theme of the song is overshadowed by more complex feelings of wanting to belong somewhere the song’s narrator can’t. He heads back from Cyprus Avenue to walk along the railroad track drinking wine but he sees that girl from Cyprus Avenue again and finds himself ‘caught one more time.’

The lyrics paint a fleeting picture of adolescence life while the sound is just intoxicating to the ears. This integral piece of the iconic 1968 album Astral Weeks is a tasty delight blended in jazz, blues, classical and celtic roots.

During the 1970s it became routine for Morrison to close his shows with a rousing rendition of ‘Cyprus Avenue’. It probably reminded him of his roots wherever he was performing in the world, but now he is back where it all began, and there to celebrate his 70th birthday, along with a knighthood, in his own words; ‘its too late to stop now!’