Geoffrey Farmer’s The Surgeon and the Photographer is being shown in its completed form for the first time in the UK at the Barbican’s Curve gallery. The Curve is a unique 90-metre exhibition space that wraps around the back of the Barbican concert hall.

Open since 2006, contemporary artists have been commissioned to respond to the distinctive architecture of the space. Developed by Farmer over a three-year period, The Surgeon and the Photographer consists of 365 puppet-like figures that form a procession through the gallery. The figures are accompanied by a sound composition that plays throughout the space and a new film commission.

Farmer’s artistic practise resonates particularly well with the Dancing around Duchamp cross-arts season at the Barbican Centre this spring. Farmer’s puppets are composed of collaged images from old magazines and books and fabric forms. They create a witty dialogue with Dadaist photomontages, the traditions of assemblage and the concept of the ready-made. The exhibition in the main Barbican gallery, The Bride and the Bachelors: Duchamp with Cage, Cunningham, Rauschenberg and Johns, explores Duchamp’s legacy and influences. The element of change employed by Cage and Cunningham is also cited as a significant inspiration for Farmer’s film and sound project.

Similar to other Farmer works, The Last Two Million Years (2007) and Leaves of Grass (2012), The Surgeon and the Photographer (2009-12) is indebted to photographic reproductions. In order to create these three works over the last six years, Farmer has clipped tens of thousands of images from old books and magazines. In The Surgeon and the Photographer, the faces, masks, limbs and accoutrements were all cut from books and magazines from a closing down second-hand bookshop in Vancouver. Farmer has commented, “The bookstore in Vancouver resembles a ruin. It is lawless, a labyrinth of book piles and collapsing pyramids. One day while flipping through a book there I had a simple thought about its relationship to my hand”. Farmer began to consider his hand in relation to the scale of the images in the books. The 365 figures create a “puppet calendar” – one for every day of the year. They are arranged on plinths in small and large groups to suggest crowds, or even as portraits of days and months. These vignettes demonstrate Farmer’s craftsmanship and artistic skill. They are sensitively and carefully arranged. The sculptural forms also have a strong animist sensibility. Inspired by the Pacific Northwest culture of the occult, Farmer has created deities, shamans and shape-shifting characters. The dark walls and low lights help produce a feeling of intimacy in the space, the viewer feels encouraged to tread quietly, instilled with a sense of reverence.

A computer-controlled montage, Look in my Face; my name is Might-have-been; I am also called No-more, Too-late, Farewell, is projected at far end of the gallery. It is a newly commissioned work, depicting whole pages from which elements have been cut for the puppets. It is also only here that the viewer realises that these images change in unison to the sounds they have heard throughout the space all along. This library of different sounds includes the click of a camera shutter, scissors snipping, and the tick of a clock. The sounds amplify a sense of chance, time and distance. The relationship between the puppets and the video work is inspired by Roland Barthes proposal in Camera Lucida (1980) that cameras “were clocks for seeing”. They mark the passing of time and the attendant sense of loss, from the moment a photograph was taken to the present.

The title of the exhibition, The Surgeon and the Photographer, refers to Walter Benjamin’s seminal 1936 essay ‘The Work of Art in the Age of Mechanical Reproduction’. Benjamin compares the magician and the surgeon, and then makes an analogy to the work done by the painter and the cameraman. In a society where contemporary art is criticised as regularly as it is churned out, Farmer is both critically engaged and aesthetically proficient. There are conceptual roots to his practise, but his belief in material exploration and physical production as a form of research allows the work to maintain a playful and appealing quality.

Farmer’s approach is process orientated and research based – drawing on storytelling, popular culture, history and literature. The images are sourced from books on subjects such as art, natural history, ethnography and popular culture. The exhibition is an interesting and poetic reflection on photography, process and reproduction.

The exhibition ‘Geoffrey Farmer -The Surgeon and the Photographer’ is open until 28th July 2013. 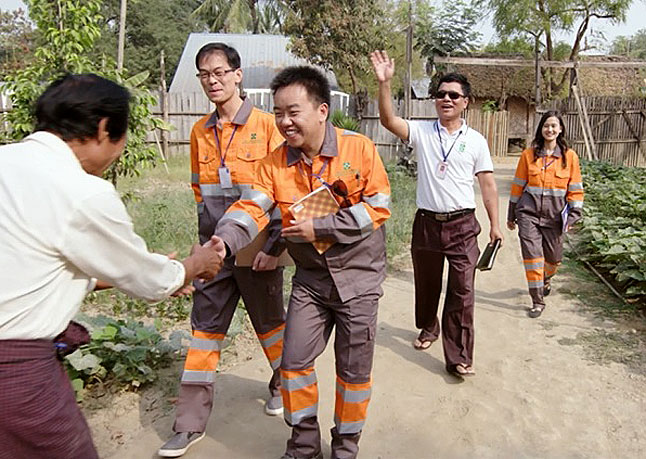