‘Love is stronger than time’ – Die Liebe ist Stärker Als die Zeit – is the assertion underpinning Friedrichstadt-Palast Berlin’s latest theatre production, ARISE. The motif suggests to us that no matter what happens over the course of our lives, Love WILL ultimately prevail.. right?

The question of Love’s strength is chronicled in ARISE. It’s the story of an artist named Cameron (Frank Winkels), who upon losing his muse is left frustrated and angry. He blames Time for stealing his inspiration and leaving him deprived. Whilst sitting in the audience, I couldn’t help but recall my own experiences of when I too had bitterly held Time accountable for my lacking and inability to achieve what I wanted. My personal recollections formed a mental entourage to Cameron’s struggles as we watched on until he eventually turns a corner, rediscovers his purpose and makes peace with Time – with a lot of dance and music along the way.  ‘At the end, ARISE is about believing in light coming through after every darkness’ says Dr. Berndt Schmidt, General Director and Producer. Heart-warming and hopeful, these words are especially welcome and ring true collectively more than ever.

Throughout the show mulling over the Love vs Time question one thing did become very clear. The powerful movement and expressiveness of the performers showed without a doubt that their Love of theatre has absolutely prevailed over the Time of Covid. Fortunately, these big abstract thoughts  ARISE may trigger, actually have a very big real-life space to match because the iconic Friedrichstadt-Palast theatre exhibits the largest stage in Europe. So, if you can bring yourself back down to earth and put the concept of Love on hold you’d be able to look around the room and observe the impressive physical theatre space on offer. Here, the Palast continues to deliver in aptness, ad you’ll notice not only is the show’s theme very relevant for a post-Covid mindset, the Palast itself is very on-build for Covid health and safety checklists.

The theatre has ventilated seating, with vents behind each seat circulating fresh air throughout the performance. This creates the same effect as an outdoor venue, whilst actually remaining dry and warm inside. There are empty seats deliberately placed between parties of bookings and an empty first-row too, accommodating social-distancing between actor and audience. Asides from this resulting in the luxury of being able to have your bag sat conveniently next to you on the empty seat (rather than stuffed under your feet) there is a secure feeling that any Covid concerns have been efficiently allayed.

But once the curtains go up, all these practical concerns are quickly forgotten: the production engulfs you, seizes you, and demands your undivided attention. There’s so much going on. I didn’t know where to look first, because I felt as though I had to be tactful with my glances. If I looked at one spectacularly bedazzled and jewel-adorned dancer for too long, I might be missing out on an equally beautiful scene happening simultaneously on one of the two raised platforms on either side of the stage. You can feel the eyes of the audience flitting between all the sights every few seconds, taking in as much as possible. Usually I might have been concerned that this constant heading turning on my part might have looked like a bizarre twitch and unnerve those around me. But, I doubt it because they were likely doing the same thing – not that I had any time to actually check this theory because I couldn’t add another element of head turning to my viewing cycle. When it was time to applaud, there was another quick chance to try and take in the various costumes, resembling something I can only imagine came straight out of Aladdin’s Cave. Tassels, epaulettes, fishnets, sequins, feathers, studs, wings, headdresses, and all manner of accessories which I wouldn’t even know what to call. All very over the top and spectacular.

The array of talent and variety of acts on display throughout the show is impressive, although how the Russian Swing Act Troupe and acrobats tie in with the actual story line of Cameron and where he was in his odyssey, I’m not sure. Whether it’s a stubborn attempt to rebel against Time and delay his potential or not, the acrobats of the New Flying Careers brought the audience right back to the present moment. Just before your thoughts have a chance to get too deep, quietly pondering on the strength of Love, you find your eyes glued to a trapeze artist who has just leapt into the air, and taken the air out of my lungs right with them. Suddenly thought is banished, and you’ve no choice but to be entranced by the display of trust as they fling themselves around and catch each other by their legs or arms – all in mid-air, of course.

Once all the flying performers have been safely caught, I too catch my own breath. More aerial awe ensues. There are clever set pieces, too. Gradually, the audience slowly realises that the stage had also just been extended to include the space above our heads, as two dancers descend across the theatre directly over us, suspended from ethereal wires, all whilst twirling beautifully in their hoops. A gentle Mexican-wave of chins-to-the-ceiling rippled across the audience as we lifted our heads to take it all in. Oh, and a pool appearing in the middle of the stage, deep enough for a mini synchronised swimming display? Not a trick of the light! So, is Love stronger than Time? Maybe, but if you see ARISE you’ll certainly be persuaded to think so – at least, for the time of the show.

ARISE will be showing at Friedrichstadt-Palast, Berlin, until 27th February 2022. Find tickets here.

Stay at Motel One Berlin-Hauptbahnhof from £79 per night.

Redesigned in 2019, Motel One Berlin-Hauptbahnhof was redesigned in 2019 inspired by the iconic local station and its surroundings: expect transport-themed installations, intimate train compartment booths and memorabilia documenting the Hauptbahnhof’s evolution from neighbourhood stop to global transport hub.

Motel One Berlin-Hauptbahnhof is right at the centre of Berlin’s throbbing metropolis – and just a 25-minute walk (or 8 minute drive) from the Friedrichstadt-Palast theatre.

How to Plan a Wedding Menu 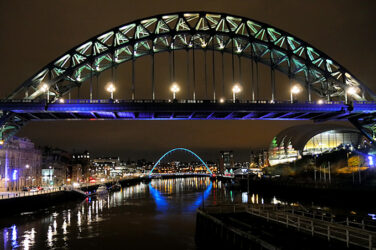 Travelling to Newcastle: Everything You Need to Know

words Al Woods Newcastle is a famous city located in the North of England, ...

A BIGGER SPLASH is a dazzling, sensuous portrait of desire, jealousy and rock ‘n’ ...