What can we learn from starman & maverick David Bowie? – words Phil Beadle

There’s a section in the foreword to my book ‘Rules for Mavericks’ in which the great music writer Chris Roberts writes a four-word, verbless sentence in description of a recently deceased musical artist (this from the perspective of having interviewed that artist four times).

The sentence is, “The free male, unique.” It refers to one David Bowie. As is often my experience with engaging with Mr Roberts’ way of putting words together, I’ve had these words rolling round my mind and my tongue since first viewing them.

There seems to be something uniquely European about this description. It fires questions: is this mildly odd grammatical construction the most concise of summations of a life well lived? Do they flatter Mr Bowie? What is a free male, and if he (or she) exists, what can be learnt from him?

The answer to this last question always seems to coagulate around a song title: ‘Changes’. Many tired monologues will be written over coming years (as they have been in previous ones) about Bowie’s ability to anticipate trends (through, in reality, he was more responsive to fashions than the ignorant might imagine) and about the fact that he changed his clothes regularly. But there are deeper, more profound lessons to be learnt from him other than his co-option of the young, his subtle version of plagiarism and his understanding that what you look like is a key part of the job.

If we take a chronological look at his life as a structure with which to view such lessons, we can see that what is to be learnt from the life and art of David Bowie is not necessarily to be found in examining his successes: it is more to be located in how he dealt with failure and the fact that even an artist of his significance, in possession of such fat fistfuls of cultural and fiscal wealth dealt with rather more of it than he might have thought was just.

His very earliest failures, and they are fairly rank, reveal to us that, while imagination will eventually transcend circumstance, we all have to start off as gauche young men or women scratching for acceptance in an art form that eludes us. The skiffly blues of David Bowie and the Lower Third’s single is a borderline release-worthy first real attempt that the starman himself ruefully and sarcastically acknowledged as being, “a beautiful piece of solipsism”. But even within the tinny noise of any juvenilia the artist he might become reveals himself as the future present. The second line of ‘I Can’t Help Thinking About Me’ is, “My head’s bowed in shame; it seems I’ve blackened the family name” which, while juvenile, is smarter than the usual opening gambit to an ignored minor single from 50 years ago.

Following this, David Bowie, like all of us, continued to search for originality through the imitation of others (though this time more successfully). His ‘Anthony Newley’ period, of which the best remembered artefact is ‘The Laughing Gnome’, is commonly held to be a period piece, a staging post to brighter things. But anyone lingering a while at this supposed one-evening motel might find it richer than they’d thought. The Deram album is, for me and vanishingly few others, amongst Bowie’s richest works: ornate psychedelic word-smithery skips lightly over swooning sixties orchestration, his voice and ear for melody become present tense and in ‘Let Me Sleep Beside You’ he creates a song any songwriter of substance would recognise as the work of a true contender. It flopped! And anyone sensible might have retired; thereafter, to pursue a career in mime, remaining forever a footnote, a one-off article about promisingly flawed lost albums. But he didn’t stop, didn’t retire; and he ‘more-or-less’ gave up mime. David Bowie the artist accumulated a number of flop projects before his breakthrough but was sufficiently convinced of his own genius, even when there was little tangible proof of its existence, to keep going when all dreams seemed thwarted. He is one of those stars who can do that.

So we can learn from David Bowie is that you are only a failure when you stop dreaming and, through further study, might observe that even the greats are subject to moments when the pressure is all too much and they lose faith. Bowie’s Tin Machine project was greeted by derision, boos and the collective unconscious of a whoop of music writers joining in on its most bullying, willfully ignorant chorus. “Do we like this, Steve?” “I’m not sure we like this, Terry.”

In reality, Tin Machine saw the start of Bowie’s journey back towards relevance after a series of phoned in commerce orientated albums. Here, he started again to play about with unacceptable chord progressions; here, he juxtaposed rock brutishness with avant garde stylings; and – here – he started writing a few great songs again (‘Shopping for Girls’ off ‘Tin Machine II’ is amongst his very cleverest constructions). But the catcalls had such momentum they would not diminish, and the man eventually climbed down from his vision, humbly and publicly disavowing really good work. It is salutary that an artist of his vision forced himself to accept the tone-deaf criticism of lesser aesthetes, and in that very humiliation is contained a lesson. The artist themselves is the only true judge of the quality of their own work: the moment you start listening to noises off is the moment your vision becomes dilute. It is never good, even when in the bosom of perceived failure, to be too in thrall to the compromising (and compromised) voices of criticism.

We also learn from him, partially from Tin Machine and definitely from ‘Outside’, that what may well be your most difficult, most uncompromising and best work, the thing in which you are most truly yourself, the moment in history when you’re at your most accomplished may be ignored. ‘Outside’ was, and remains, astonishing. In his foreword to my book, Chris Roberts writes on meeting the man, “He wore a ludicrous amount of bookish learning lightly and had a furious ongoing interest in the never-motionless now.” ‘Outside’ is the work of a man who had spent long hours at his desk and had done his research: a long form fractured narrative that, through absurd characterizations, undertook a near academic examination of a visual art scene in which self immolation as fashion had reached its logical, suicidal end, it successfully jettisoned any remaining ‘fans’ waiting for a rehash of ‘Let’s Dance’. Like Lou Reed’s ‘Lulu’ it went down like a cup of partially heated sick amongst critics; like ‘Lulu’ is stands post the death of the artist as a monument to what can be achieved when you follow the muse and ignore the market. Maverick careers follow a different path.

And then, of course, there is always death. Of course, of course. Like many before him David Bowie teaches us that a good death allows those left to appraise the depth of the life before it with new, kinder eyes. His penultimate single, the ten-minute long ‘Blackstar’, was riddled with references to the arcane, heavily dropped hints as to his illness and a section sung in the voice of death itself. This was followed by ‘Lazarus’ – a last and final word – which was accompanied by a video in which our final view was of an imp creeping back into the cupboard to the Narnia from which he’d once seemed to hail. As a maverick David Bowie teaches us that, if you’ve got real drama it cannot be stolen, that you’ll destroy the mystique should you give everything away and that, whatever gender you inhabit, “the free male, unique” is something to aim for.

Phil Beadle is an award-winning teacher, author and broadcaster. His new book Rules for Mavericks – A manifesto for dissident creatives is out now, published by Crown House Publishing, priced £9.99.

What can we learn from starman & maverick David Bowie? – words Phil Beadle

How to make a Kiwi Envy in a whole new way

Anyone with nyctophobia (otherwise known as a fear of the dark) would not fare ... 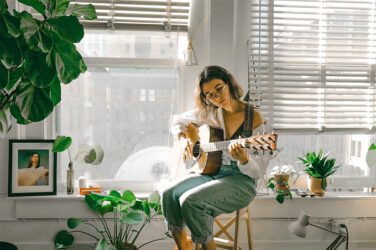