Since his 1973 directorial debut, Badlands, Terrence Malick has carved out a niche for himself as one of the great poets of cinema. In a career that has lasted nearly forty years, he has created a small but beautifully realised body of work that explores a number of profound themes, the most prominent of which is the relationship between man and nature.

It’s difficult to discuss the plot of The Tree of Life because it is a film in which very little happens. Yet it also covers the entirety of existence in just over two hours. The first hour of the film is some of the most beguiling and abstract work that Malick has ever created. It’s a heady, dizzying sequence in which the life of the main character, Jack (played by Sean Penn as an adult) is intercut with scenes depicting the birth of the universe itself.

Malick shows us the creation of Earth, and takes us on a whistle-stop tour of the pre-human era – including a much discussed, and slightly bewildering, scene involving dinosaurs – that at times feels like the ultimate David Attenborough TV series.

Yet within this visually dazzling tone-poem is the central idea of the film. Malick contrasts the vastness of the universe against the incredibly small, insignificant story of a family in Waco, Texas in the 1950s. This creates his most grandiose dichotomy between man and nature yet. It is a story both personal and universal, in more ways than one.

Following the opening, the film settles down into a more straightforward – though by no means wholly straightforward – section about the childhood of Jack (Hunter McCracken) and his relationship with his loving yet domineering father (Brad Pitt) and free-spirited mother (Jessica Chastain). Both Pitt and Chastain are magnetic as the parents, but the roles are fairly broadly defined and simplistic. The film is anything but simple though. Terrence Malick uses these two diametric opposites to explore the central conflict of the film – nature, represented by the father and “grace”, represented by the mother. These two concepts are presented as choices.  Jack may choose to live his life following nature – self-reliance and embracing the more animalistic aspects of human nature. On the other hand he can choose “grace”, or at least Malick’s concept of it – trying to live a life that is free of selfishness, of petty jealousies and insults. As Jack grows, he is increasingly pulled between these two extremes, as his mother and father wrestle inside of him.

In a film concerned with ideas that are universal in scope, this idea is the one that resonated most strongly with me, because I have often wondered which of my parents I am most like. Neither of them lie at the extremes that the father and mother of The Tree of Life do, but they are different people. THe extent to which they both define me as a person is something that I have given a lot of thought to, and seeing that idea articulated so poignantly really spoke to me on a deep, elemental level. 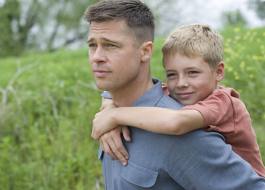 It is also in the 1950s sequence that the film best explores ideas of faith and religion. The first scene of the film features Chastain receiving a telegraph informing her that her son R.J., the younger brother of Jack, has died. It is never explicitly stated, but we learn that he died when he was 19, and given the way in which the news was broken and the fact that she receives the news sometimes in the 1960s, it isn’t too hard to infer that he was probably killed in Vietnam. When the film later jumps back to Jack’s idyllic childhood, he sees another boy drown whilst in a communal swimming pool. This event is the catalyst for a crisis within him. Both incidents raise questions about the existence of God that anyone who has experienced such a loss will be familiar with; how could this happen?

Jack himself begins to question God; when someone says that the dead boy is “in God’s hands now”, Jack thinks “He was in His hands all along.” Later, he seems to justify acting out – attaching frogs to rockets and lighting them, shooting R.J. in the finger with a B.B. gun etc. – by saying that he doesn’t have to act “good” if God doesn’t. It’s a bold choice on Malick’s part to use adolescent angst as a means of depicting the tug-of-war between faith and faithlessness, but one that feels very grounded thanks to the sense of place and the strong performances of McCracken.

What’s astonishing about The Tree of Life is that, even though it is concerned with dark and sombre themes, it is a wonderfully joyous experience. The cosmic sequences are full of awe and spectacle, and the 1950s set scenes are full of the wonder and excitement of childhood. Though the over-arching story of this section of the film feels overly familiar – young boy acts out against his father, who realises perhaps too late that he has been focusing on the wrong things in life – Malick populates that story with moments of quiet beauty. There’s a strong focus on the sheer fun of discovery as the boys play. Malick’s camera has a gorgeous fluidity to it that captures every small moment of delight on the faces of the boys, as well as the love of both parents for their offspring. It’s easily one of the greatest depictions of childhood that has ever been committed to film.

The Tree of Life is a film which will divide people, as well it should. For some, it will be a frustrating, long and ponderous experience. No doubt the word “pretentious” will be thrown at it with gay abandon. For others, it will be a profound and moving experience. Neither reaction is entirely right or wrong. The Tree of Life is a work of pure artistic expression from Terrence Malick as a true artist, and like the best art, it provokes extreme responses. It is not a film intended to be liked by everyone who sees it, but loved or hated. In an age when most films try their hardest to appeal to as broad an audience as possible by sacrificing any edge or idiosyncrasy, The Tree of Life is a work almost too beautiful to fully comprehend. It can sit comfortably alongside 2001: A Space Odyssey as one of the most breathtaking realisations of the potential of cinema, and is one of the great achievements of the last ten years, let alone just this year.

by Edwin Davies and www.amightyfineblog.com

SpiderBear – A New Kind Of Superhero

Robert Graves True Story: The Laureate – words Aexa Wang If you are looking ...