As we start the new year, music fans around the world are eagerly waiting for this year’s festival line-ups to be revealed. Among the headliners and acts already confirmed for 2020’s summer spectaculars are Liam Gallagher, Blossoms, Taylor Swift, Frank Ocean, Green Day, and Foals. But based on the initial announcements made by some of the biggest festivals happening around the world, it’s clear that men are dominating the entire industry. In fact, all three headliners at this year’s Coachella Festival—arguably the world’s most well-known festival—are male.

This lack of female representation hasn’t gone unnoticed by music fans, either. Scotland’s TRNSMT Festival was criticised for being particularly male-heavy, with just two out of the 13 acts in its first wave of bands were female. This led to festival boss Geoff Ellis claiming that more women need to be “picking up guitars” and “playing in bands” if they want to be included on line-ups. He naturally faced a huge backlash online over his comments, and was even branded a “sexist dinosaur” by The Independent’s Roisin O’Connor.

In a society where feminism and equality are hot on everyone’s lips, Ellis’ comments beg a couple of important questions: what can we do to achieve a gender balance in the music industry? Or are women simply fighting a losing battle?

While festival organisers continue to book mainly male stars for their headliner/high-profile slots, female musicians are arguably creating greater waves within the industry. At the 2020 Grammy Awards, Billie Eilish became the first woman to scoop the Big Four awards (album, record, artist, and song of the year) in one night, as well as just the second artist to ever do so in the ceremony’s history. The first artist to set the record was Christopher Cross, in 1981.

In the process, Eilish smashed a series of other records, including being the youngest winner for both album and record of the year. Lizzo also cleaned up at the ceremony, winning best pop/solo performance, best urban contemporary album, and best traditional R&B performance. Beyonce and Lady Gaga collectively took home three awards, while Ariana Grande, Lana Del Rey, H.E.R., Karen O, Brittany Howard, and Taylor Swift were also nominated for their most recent releases.

With all this female talent within the industry—not even including those that weren’t nominated—one would be forgiven for finding it hard to believe that there simply aren’t enough women making music good enough for festivals. Instead, critics are turning on the festival curators for ignoring the clear abundance of female talent available. As noted by Sian Allen of music festival booking agency MN2S: “It’s the prevalence of old fashioned, ‘boys club’ mentalities from male-dominated positions in power that continue to maintain the status quo and don’t give women the equal platform they deserve.”

Female leaders are pushing for change

During her speech at the Music Biz Awards in May 2019, Bebe Rexha acknowledged the gender disparity in music leaders, telling guests outright: “We need more women executives in the music business.” The singer, who was making her winning speech for that year’s Breakthrough Artist award, mentioned that “women executives get paid 30 per cent less than men and only 15% of women in the music business actually run labels”. Just a few months later, Rexha, then 29, admitted a male executive had told her she was “too old” to post “sexy” photos on her social media account.

This idea that the music industry is run by men, for men is amplified when female artists like Rexha admit they suffer from severe and uncalled-for criticism from the executives in charge of their careers. Similar stories of sexism and abuse have been reported by Lady Gaga, Lauren Aquilina, and Kesha, to name just three. And while it’s easy enough for men like Neil Portnow, the former president and CEO of the Recording Academy, to say women simply need to “step up” into executive roles, that might well be easier said than done. His successor Deborah Dugan, announced her intentions to use her new platform “to affect positive change” when she first started the role. However, just 10 days before the 2020 Grammy Awards, the Recording Academy parted ways with Dugan, citing “professional misconduct”, just a month after she spoke about the “huge efforts” she was spearheading to diversify the industry.

A balanced industry is achievable – if people try

One of the clearest examples of gender bias in festivals comes when you compare what Geoff Ellis said about female musicians to 2019’s Primavera line-up. Branding their efforts as “The New Normal”, the Barcelona festival achieved a 50/50 gender split on the bill, proving that it’s very possible without scrimping on big-name acts. Performers across the weekend included Solange, Rosalia, Tame Impala, Lizzo, Mac DeMarco, and J Balvin. Furthermore, the gender split of last year’s lineup was emphasised in the festival’s marketing, its organisers have retained gender parity for this year’s event, without even drawing attention to the gender make-up of its bill. For Primavera, what was once the new normal has simply become normal.

And this change isn’t just taking place for live performances either. Behind the scenes, women are holding events to celebrate each other’s successes, while attracting new female and non-binary talent to the industry, such as the Womxn of Music Business Fair. DJ Annie Mac recently teamed up with Smirnoff’s Equalising Music campaign to launch the Equalising Music Pledge, dedicated to pushing for greater gender balance within the music industry. This includes festival and gig line-ups as well as those working behind the scenes to pull these events together. And while there is still a long way to go, efforts are evidently in place to get women where they need to be in order to make a visible change within the industry. This includes highlighting the efforts of female singer/songwriters, producers, and executives.

Vehicles to keep an eye out for this year 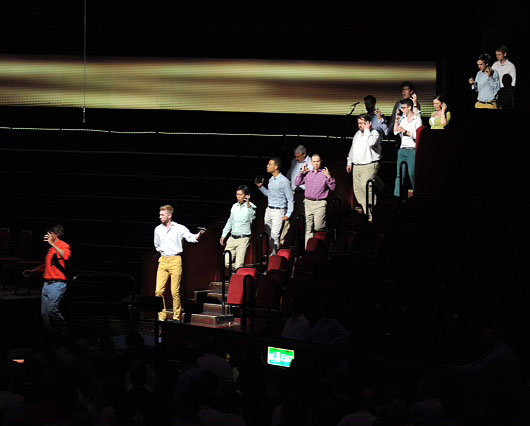