A Man of Words: An Interview with Jeff Noon – words Daniel Lamb

For over twenty five years now, Jeff Noon has been plying his craft and steadily building a reputation as one of Britain’s most original and influential cult writers. Somewhat of an underground sensation, his career has had its fair share of ups and downs over the years.

After taking a lengthy absence from writing novels, Noon has recently made a triumphant comeback with two critically acclaimed novels centring on the surreal experiences of private eye John Nyquist, A Man of Shadows and The Body Library. I caught up with Jeff before his homecoming talk at Home theatre in Manchester to chat about his career and reflect on twenty five years since the publication of his Arthur C. Clarke Award winning debut novel, Vurt. 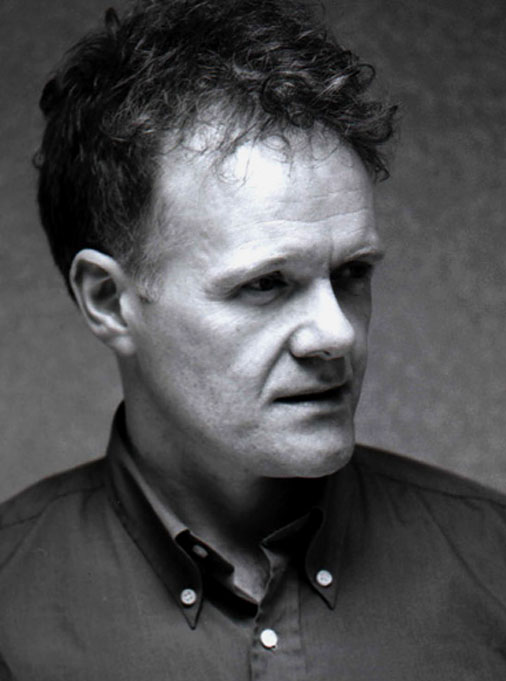 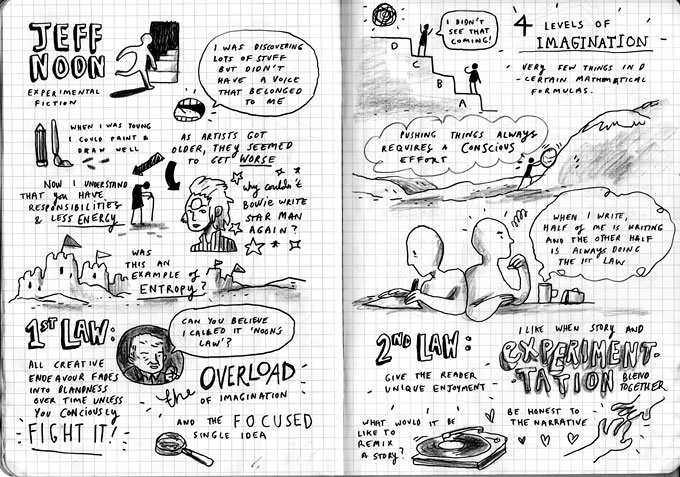 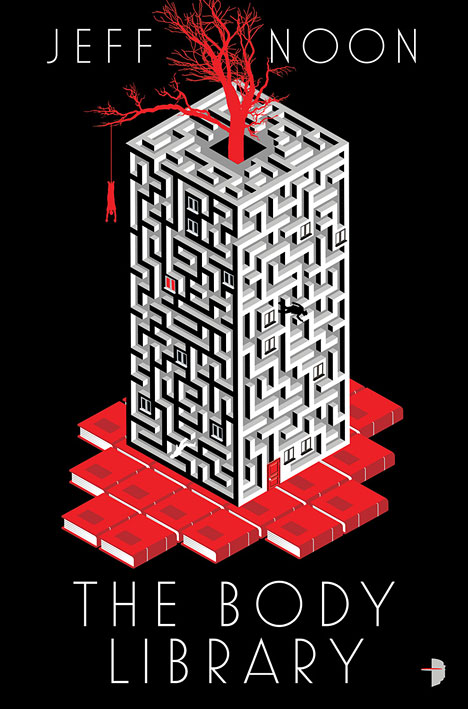 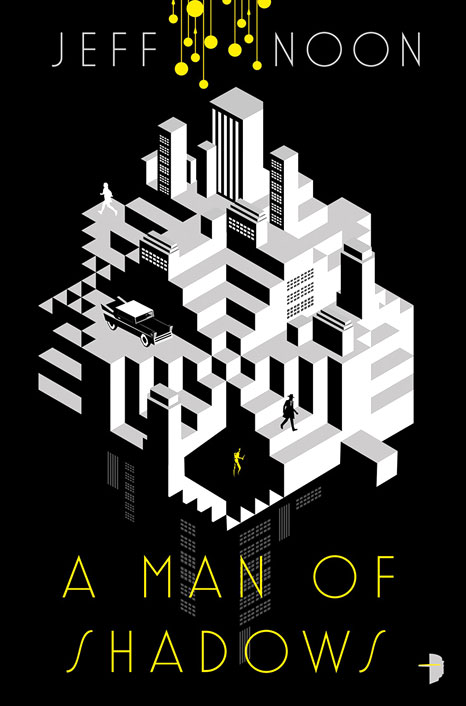 So how did Vurt come about?

“I was writing plays. I was trying to be a playwright. I had a bit of success. I had a play on at the Royal Exchange and I was resident writer at the Royal Exchange. And I thought I’d made it. This was in the 80s. And, in fact, I hadn’t made it. I just got one rejection slip after another for my second play from lots of different theatres. I’d kind of given up on the whole idea of becoming a writer, to be honest, because it gets a bit depressing when you’re just being rejected all the time. I had no intention of writing a novel. And then I got a job at Waterstones, and even though I was surrounded by novels and I was actually running the science fiction section, at no point did I think I was going to be writing a novel. I mean, me and my mate used to chat in pubs about SF. I can remember definitely saying to him, ‘Why’s there not been a Neuromancer set in England?’ I can definitely remember saying that with no inkling that I might actually be the person who would write it. Vurt came about because of a whole series of complex accidents, so there was probably five or six things that had to happen, and if you took one of them away it wouldn’t work. It actually started as a play. A lot of my stuff in those early days started as plays – Pollen was a play, Automated Alice was a play. Vurt was a play called The Torture Garden. It was actually based on an 1899 novel. So when I was asked by my friend who was starting a little publishing company to have a go at a novel, I naturally took that half-finished play, and started to write it as Vurt. It changed a lot. And because I was running the science fiction section at Waterstones, I kind of knew what British science fiction writers were doing. And about three quarters of the way through Vurt it came to me that, if this reached the right audience, this could be quite interesting.”

On Vurt’s continued relevance to a younger audience:

“When I wrote it I didn’t have any other intention in mind than to write a book that my mate would love. And so I filled it with all the stuff I knew that he would really be into. When it first came out, it came out in the middle of the rave era so people naturally assumed that it was about people taking ecstasy and going to raves, and I’d never taken ecstasy so I always used to laugh at that. But I was observing that. I’ve always been a bit of an observer like a lot of writers, rather than partaking, you know? So some people naturally assumed that it was about then, the early nineties, but some of my older friends who read it who were ex-punks like me, they said ‘Oh, God, well that’s about the punk era, isn’t it?’ ‘Cos that was like the sort of thing we used to do in the punk era.

Recently I’ve kind of made a little bit of a comeback. I was away for a while.  I was certainly away from science fiction for a while. And when I got this new publishing deal and they invited me to a party for all of their writers, I turned up at this room in London and suddenly for the first time I was being greeted by younger people to whom I was a great influence. And I’d never seen that. It was very moving actually. It makes me feel like an old man, but yeah, it’s good.”

On choosing to set the novel in Manchester:

“I definitely wanted to give a voice to Manchester without a doubt. I had that in mind. And I wanted to talk about what I was seeing around me. I wanted it to be real. Because I knew it was going to go off on flights of fancy, I wanted it to feel real as well.”

Is there any chance of a film adaptation?

“There’s always stuff going on with the Vurt film. They’re very close. They’re looking at it as a big TV series at the moment. I can’t say too much, because these things always fall apart. It is constantly being looked at. You become philosophical about that.”

On his use of language, and the rhythm of his prose:

On his writing process:

“The way I write, there’s two things I’m doing. One is very controlled. I’m a very controlled mathematical person. But another part of me is just mad. And those two fight it out. Whatever’s needed at the time will take over. There’s a big spectrum. At one end there’s pure storytelling and at the other is extreme experimentation, and I place my work somewhere along that. I always think of the metaphor as like you’re going along a road and you’ve got a map and road signs and all that, but then you come to the end of the road and you just keep going and then you’re in the wastelands, and there’s no maps, and there’s no signs, but you just keep going anyway.”

On his earliest imaginings:

“Joshua Two was this crazy rock star that I invented when I was twelve after my dad left home and it was just me and my mum. I had a quite difficult adolescence. I retreated into my room and I created this character – Joshua Two. This was in the early seventies, so he was very much glam rock, and he was very much a David Bowie/Ziggy Stardust figure. He put out seven albums. I did it in great detail. I wrote out all the songs, all the lyrics, I designed all the covers. And he had a career that went up and down. I noticed, ‘Oh people fail, don’t they? He has to get into drugs and stuff.’ It was all there. And there was this cardboard box and it had ‘Joshua Two’ written on the side in felt tip pen and there was a lot of material in it. It got thrown out eventually, but funnily enough later on this year I’m publishing my very first crime novel – Slow Motion Ghosts – and Joshua Two is a major character in that. And that cardboard box turns up. He’s got a different name, but that intense desire to create an imaginary figure and an imaginary world is a very big part of why someone’s killing people.”

On the origins of his John Nyquist series:

“When I got the idea for the Nyquist books, first I got the idea for the location and as soon as I started to put that together I thought, ‘I need to explore this location fully. What kind of character would do that?’ And I thought a private eye would do it. So Nyquist for me was a practical way to begin with of thinking ‘Who will explore this city the most? Who will go to every single area?’ With me it’s very practical. Like, they’re set in 1959. There’s only one reason why they’re set in 1959 and that’s because I didn’t want global warming to be an issue, because it would drag it down. So I thought, okay I’ll set it in the past. And then I made the decision I didn’t want it to be set in the 60s, because people think about that in a certain way – you know, The Beatles, psychedelia and colour. So I thought 1959. Then it kind of explodes from that.”

Are there any more Nyquist novels in the pipeline?

“There is one more, yeah. I’ve got it in mind. I’m starting to put together ideas for it. Nyquist Three will be interesting, I think, with the ideas involved. But I’ve got to write my second crime book first, the follow up to Slow Motion Ghosts.”

And will he ever return to Vurt?

“I’ve got to do the last Vurt book as well, yeah. I knew I would come back to Scribble one day, but I had a feeling it would take a while. I had other stuff to do, you know? But it feels right to come back.”

For all news & information please visit the Jeff Noon website

A Man of Words: An Interview with Jeff Noon – words Daniel Lamb

4 easy ways to afford a holiday every year